This low-budget 30s programmer is introduced on the title screen as
Bobby Nelson in…
THE GHOST RIDER
…with Rex Lease.
This is rather a curious highlighting of the name of the child actor who featured in this story of skullduggery on the range, as had become standard in such oaters. It was very common to have a courageous boy to help catch the rustlers or other bad guys, often the younger brother of the leading lady. 90% of the audience at the theaters where these movies were shown were small boys and they could identify with the lad who was plucky (and lucky) enough to ride the range as sidekick to a screen cowboy.
.
. 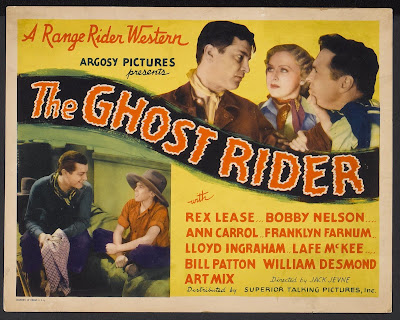 A lot of fun
.
In this one we are in Arizona, 1903. Strange to think, isn’t it, that when this picture was made, 1903 was only three decades before – rather like present-day movies set in the 1980s. In 1935 you were still able (just) to believe that the West was still Wild.
Rex Lease was one of the most prolific screen cowboys. He had first appeared in Tim McCoy silent oaters in the late 1920s and coped with the move to talkies as the decade ended, starring in B-Westerns for Poverty Row studios. In 1935 alone he was in six (see, for example, Fighting Caballero). He slipped back a bit in the 1940s, playing second fiddle to the likes of Roy Rogers, and later took smaller and smaller parts. He did Western TV shows in the 1950s and altogether in his career made over 160 Western appearances, the last one being an episode of The Life and Legend of Wyatt Earp in 1960. He died in 1966.
.
. 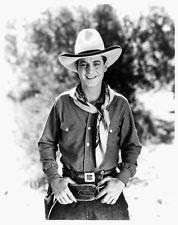 Rex Lease
.
But in this picture he was almost in the shadow. He is not the ghost rider of the title and he doesn’t even appear until almost half way through the movie. The real star is good old Franklyn Farnum, the eponymous spectral horseman. Farnum (not related to Dustin or William) was born in 1878 and was on the vaudeville stage by the age of 12. He didn’t even enter movies till he was 39 (1917) but he liked the saddle, churning out Western shorts at a rate of knots and working a lot with Francis Ford, John’s brother. He was Billy the Kid in the 1925 silent version (at 47, a bit geriatric for Bonney, but then Billy actors often were). He gave up riding the celluloid range in the late 20s but tried to come back into talkies, taking, however, smaller and smaller parts in Westerns, which were more and more ‘B’. Farnum’s last feature-film Western was a tiny part (Barfly, uncredited) in North to Alaska in 1960 with John Wayne but he was still doing walk-ons in TV Western shows into the early 60s.
.
. 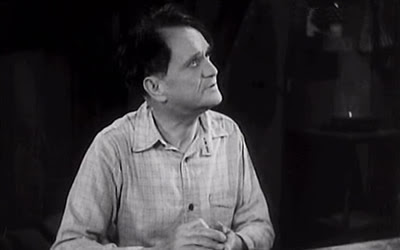 Franklyn Farnum
.
In The Ghost Rider he was still very active and quite athletic despite his 57 years, and he rides about Arizona dealing out death and leaving a playing card (an ace, natch) on the corpse of each victim. You see, he had been framed and wrongly imprisoned by the Rascobs, “a clan from the Ozarchs, all related”. “Sounds bad,” is the retort. Well, it is bad, for these are heavies of the worst kind. You know very well a character is bad when he abuses a child or animal in the first reel. Here, a boy is beaten and a dog is kicked, so they must be really bad.
.
. 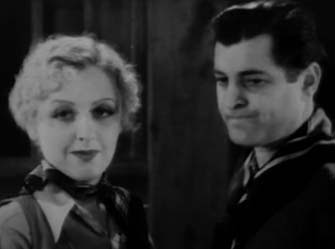 Will Rex get the gal? Rhetorical question.
.
The boy hero (Nelson) is Bobby, the convict’s son, determined, “when I’m big”, to get his daddy’s ranch back from the rascally Rascobs. When Deputy Rex finally appears, he will of course fall for the boy’s sis Linda (Ann Carroll, in her only film) and together they will all foil the baddies.
.
. 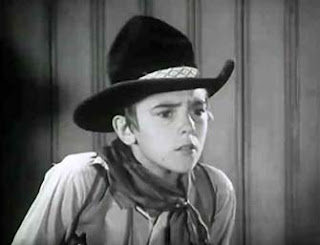 Bobby saves the day
.
Nelson, 13, looked a rather skinny, hunched and asthmatic kid but he rode well and manages to dash about the place boldly. Rex is always cheerful (his performances bordered on the comic) and in the prime of life (he was a strapping 32). Carroll was 1930s-blonde (or peroxide blonde) which is quite striking in the black & white print (which by the way is of much better quality than many similar survivors from the era).
The movie was both written and directed by Jack Jevne. Mr Jevne deserves a permanent place on the Western Mount Olympus because he wrote the sublime Laurel and Hardy Western Way Out West (1937), one of the truly greats.
.
. 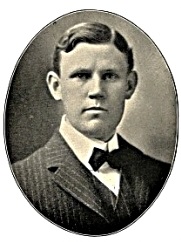 Jack Jevne
.
The fistfights are clumsy scuffles with speeded-up film and not at all the more balletic stunt-man style pugilism of later movies. There are quite a few of them.
There’s a secret passage: 30s B-Westerns loved these.
Franklyn bravely sacrifices himself, entrusting his son to Rex’s care (Rex and the boy will soon become brothers-in-law). Rex, Linda and Bobby will thus live HEA.
The picture opens and closes with a song by Jack Kirk on his banjo.
OK, I know, these movies are ineffably corny. But I can’t help it, I just like them.
PrevPreviousOutlaws of the Range (Spectrum, 1936)
NextHannah Lee: An American Primitive (Realart Pictures, 1953)Next

PrevPreviousOutlaws of the Range (Spectrum, 1936)
NextHannah Lee: An American Primitive (Realart Pictures, 1953)Next
Jeff Arnold © 2022 – All rights reserved – Designed by BetterCallChris
Scroll Up