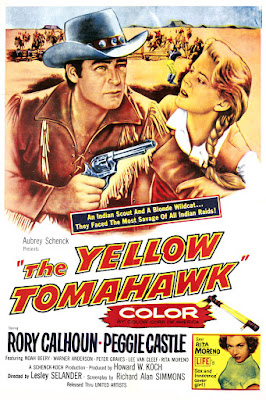 The Yellow Tomahawk was another of those 1950s Bel-Air Productions Westerns released through United Artists. Bel-Air made quite a few, often centered on forts and shot round the Kanab, Utah movie fort. Several, like this one, Tomahawk Trail, Revolt at Fort Laramie and others, were directed by ultra experienced Western hand Lesley Selander, who was especially good at the action scenes. Yes, they were ‘minor’ Westerns, but they weren’t at all bad. They used leads such as Peter Graves, Ben Johnson, Chuck Connors, Clint Walker and Rory Calhoun, who may not have been quite in the Wyane/Peck/Fonda star class but were more than competent actors and well experienced in the genre.
For such a colorful title, it comes as a disappointment to see that the movie is black & white. In fact it was shot in Technicolor but released for TV in monochrome, which is the way we see it today. Pity. Time for a fancy new remastered DVD release. Sidonis, maybe?

It’s a Wyoming/Red Cloud story, featuring Calhoun (now freelancing after the end of his Fox contract) as buckskin-clad scout Adam Reed, the well-known ‘man who knows Indians’ figure who seems as omniscient as he is omnipotent. As was traditional, there’s an arrogant by-the-book commanding officer who won’t listen to the good sense of the scout, whom he accuses of being an Indian lover. You know how they do.
This officer is Major Ives, played rather well if a tad histrionically by Warner Anderson who on a good day had a slight John Hustonish tinge to his acting. He had been first class in the Gregory Peck cavalry Western Only the Valiant in 1951. He does something similar here. In the story he has been responsible for the Sand Creek Massacre in 1864 (so he is presumably a take on the appalling Reverend Major Chivington), and now up in Wyoming, the Cheyenne want their revenge – especially so because Ives is breaking the treaty and building a fort. This makes Red Cloud and his lieutenant Fire Knife very cross.
We never see Red Cloud but Fire Knife is a key actor and is played by a surprisingly convincing Lee Van Cleef, two years on from his High Noon debut and already a tried-and-tested Westernist in his eighth feature-film oater. Fire Knife is a sort of anti-Adam Reed. They are blood brothers and respect each other, even as enemies. FK gives Adam a bow and arrows his father had given him and this will turn out to be his undoing.
.
. 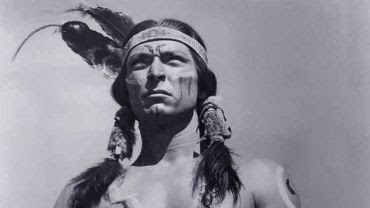 .
The eponymous hatchet, by the way, is a message that Lee asks Rory to deliver to the major – it apparently means get out or we’ll kill you.
A big plus is the presence in camp of Noah Beery (billed without the Jr these days) as a Mexican Indian scout, almost but not quite comic relief. Beery was never less than excellent and an asset to any Western. He did a surprisingly convincing Mexican, as he had proved a couple of times, including the year before in Wings of the Hawk. He has a less convincing ‘Indian’ girlfriend in the shapely shape of Rita Moreno (well, Puerto Rican, Indian, they’re both exotic, ain’t they?) She’d had the female lead in another Selander oater, the year before, Fort Vengeance, and would later star with Lex Barker in Fox’s The Deerslayer.
.
. 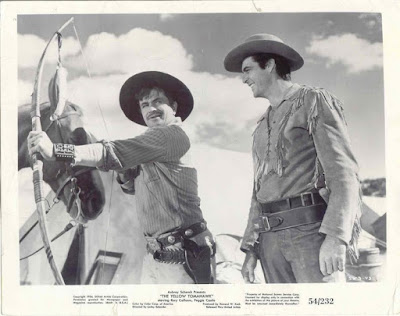 .
The white woman for Rory to fall for is Peggie Castle, who did several of these Bel-Air Westerns. She is first discovered by Rory swimming in a pool (funny how there were always these pools in the driest of deserts for the leading lady to decide to take a bath in). The love interest was verging on the sexy for 1954 and Rory and Peggie later get it on while beset by the Indians and running low on ammo.
.
. 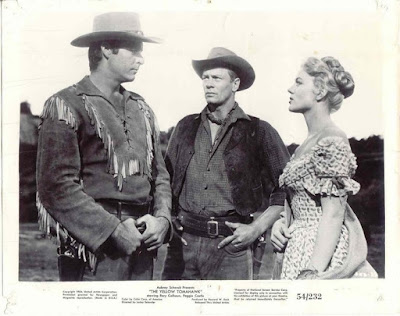 .
Peter Graves (Matt Dillon’s brother) is an evil prospector who murders his partners to get all the gold they have found and is altogether a bad egg. Graves was a good Western actor. He had smallish parts in several of these Bel-Air oaters and then got to be the star of one, Fort Yuma. You know he’s going to get his just deserts and he duly comes to a sticky end. ‘Much good did his gold do him’ is the message.
James Best is a private. As sentry, he is the first of the party to get picked off. You see, after the Indian attack and resulting massacre (which Rory warned the major about but he wouldn’t listen) the survivors set off on the perilous trek to Fort Ellis, through Red Cloud territory, and as always happens on these occasions, are picked off one by one. Thanks to the bravery of the hero, though, the hard core will come through. 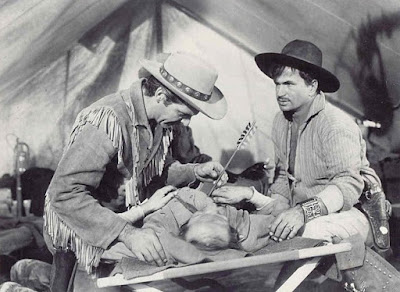 .
There is an attempt at a serious theme, that violence only begets violence and nobody wins. And there’s an unusually ambiguous ending when you feel that the slimy major will probably get away with it. He was not only incompetent but also cowardly, and horrors, in extremis he revealed that he had Indian blood, but the powers-that-be are such that they will probably believe the establishment figure’s version over that of the ‘Indian lover’. Well, we shall never know, for the door closes and The End comes up on the screen, leaving us ignorant of the outcome.
Like all this series, The Yellow Tomahawk is no great Western but it’s no clunker either, largely because of the quality directing and acting. It’s lean and mean. Give it a go, e-pards. I feel you won’t be disappointed.
PrevPreviousThe Duel (Lionsgate, 2016)
NextWay of a Gaucho (Fox, 1952)Next

PrevPreviousThe Duel (Lionsgate, 2016)
NextWay of a Gaucho (Fox, 1952)Next
Jeff Arnold © 2022 – All rights reserved – Designed by BetterCallChris
Scroll Up