.
I bet you didn’t know that in the mid-1880s, after having killed Billy the Kid, Pat Garrett went to Kansas to marry a blonde doctor’s daughter and, with the aid of Wyatt Earp, Bat Masterson and Buffalo Bill, killed or captured Butch Cassidy, the Sundance Kid and all the rest of the Wild Bunch, as well as Black Jack Ketchum. No, nor did I. But he did. It must be true because it was the
story of a 1958  Warner Bros Western. 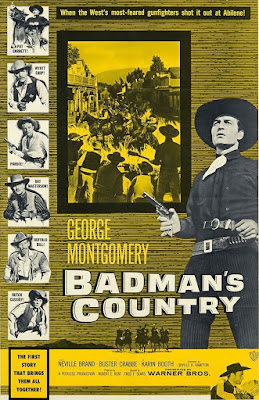 Badman’s Country has a title suspiciously like Badman’s Territory.  In 1944 and ’45 Universal had had hits by grouping as many horror characters as you could think of in movies like House of Frankenstein and House of Dracula, in which Dracula, Frankenstein’s monster, wolf men, hunchbacks and mad doctors crowded the cast list, and in 1946 RKO thought that was a good wheeze and they would have a go at that with outlaws. They put the James gang, the Daltons, Sam Bass and Belle Starr all in the same movie, with Badman’s Territory. Surprisingly, it was a box-office success. The public liked it and in 1948 they followed up with Return of the Badmen, one of those sequels which is actually better than the original. Mind, Hollywood is still pulling that trick, with cartoon superheroes jostling cheek by, er, jowl in blockbusters of unending direness. Well, in 1958 producer/writer Robert E Kent decided to pull the stunt with lawmen.
Mr Kent had started in 1940 by writing a lumberjack movie for John Payne and had written two early frontier tales, Fort Ti and The Pathfinder, for George Montgomery in 1952, and he would write more oaters for Montgomery afterwards, one of which, Gun Duel in Durango in 1957, was Kent’s first as producer. Kent’s Westerns were rather, er, traditional (I don’t want to say cheesy). But they are energetic and fun.

He didn’t write Badman’s Country; he got Orville H Hampton to do that. Mr Hampton wrote all those Cowboy G-Men episodes in 1952.  And Kent got good old Fred F Sears (right) to direct. Sears was for years a Columbia stalwart who had acted bit-parts in 1940s Westerns. He appeared in a number of the Ray Nazarro-directed ‘Durango Kid’ B-Westerns starring Charles Starrett (there were literally dozens through the late 40s and early 50s), and finally in 1949 made the leap to directing some. Sears excelled at churning out on-time and on-budget movies, and studios loved him. Yes, he made some real junkers, sci-fi dross like The Giant Claw, but in fact some of his oaters were really rather good: tough, gritty Westerns. Utah Blaine with Rory Calhoun, The Nebraskan with Philip Carey and Ambush at Tomahawk Gap with John Hodiak are good examples. He did a solid job on Badman’s Country, within the constraints of the budget – and rather silly story. 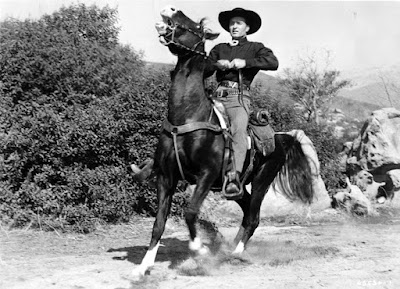 George Montgomery as Pat Garrett was a bit of a stretch. But he was 6’3” (1.9m) and had been raised on a Montana homestead. He could look tough when he had to. The costumiers duded him up too much; he would have been better in a suit. But Western heroes then were expected to wear range duds and a Stetson and have a big gunbelt.
He rides into Abilene to marry the fair Lorna (Karin Booth, also Montgomery’s leading lady in Cripple Creek and Seminole Uprising), very 50s in looks and dress. Her doctor dad doesn’t approve but gradually comes round as his future son-in-law does what a man’s gotta do. Pat arrests three of Sundance’s gang after a shoot-out in the saloon because the local marshal, McAfee (Dan Riss) is afraid to. Strange they had the fictional nonentity McAfee when they could have had Wild Bill Hickok as marshal of Abilene. The fact that Hickok was dead by the time of the 1880s shouldn’t have worried them.
.
. 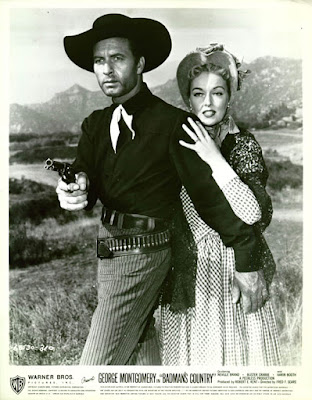 .
Sundance’s gang are Kilpatrick (presumably Ben Kilpatrick, Wild Bunch member), Carver (it couldn’t be Doc Carver, I suppose), Harvey Logan and, rather the odd man out, Black Jack Ketchum. And Butch Cassidy, Kid Curry and sundry other bad guys are heading into town to liberate their jailed colleagues. So Pat sends to Dodge for Wyatt and Bat to help him out. Sundance was played by the Professor from Gilligan’s Island, Russell Johnson. Butch is Western stalwart Neville Brand, second billed in the cast. He had been Butch Cassidy already, two years before, in The Three Outlaws, also written by Orville Hampton. Neither Butch nor Sundance much resemble Paul Newman or Robert Redford (but they do vaguely resemble the photographs of the real Cassidy and Longabaugh). Brand’s Butch is a standard Western heavy, snarling and tough. TV Western show regular Richard Devon is Harvey Logan and former Wayne stuntman Fred Graham is Black Jack Ketchum.
As for the lawmen, we have Buster Crabbe as Wyatt Earp, all lantern-jawed and growly. Typical Crabbe, in fact, and rather good actually. And Bat Masterson (whom Montgomery himself had been four years before in Masterson of Kansas) was played by another Western TV show stalwart, Gregory
Walcott. His Bat is rather overshadowed by Wyatt, who is clearly the boss. As honorary lawman, though sans badge, Buffalo Bill is in town, recovering at the doc’s from a buffalo hunting accident, and he grabs his Sharps and steps up to help out Pat, Bat and Wyatt. He is Malcolm Atterbury, not the most charismatic or memorable of Codys, I fear, but I like him in other Westerns, of which he did many. Pat rather incongruously greets him by saying, “Hi, Buffalo!” He does have a good line, when blazing away with his buff gun at the outlaws: “I sure wish they was buffalo. Can’t make a rug out of an outlaw.”
But it’s a good line-up, Garrett, Earp, Masterson and Cody, in the Abilene street facing down the entire Wild Bunch.
So we have the slightly Rio Bravo-ish plot of holding bad guys in prison despite the siege by their
accomplices, and there’s also a High Noonishly pusillanimous group of citizens who won’t back the brave lawmen, though they do later recant and blast away at the gang in a Northfield-style gunfight at the bank when the Wild Bunch arrive.
Well, it all ends with plenty of action and then Pat ‘n’ Lorna riding off in a buckboard to a new life in California, you know how they do. There’s an introductory and closing cheesy (though irritatingly catchy) ballad, penned by Robert Kent himself and crooned by The Mellowmen, so we are serenaded for the credits. It’s in black & white but there are a few nice Iverson Ranch location shots (Benjamin H Kline DP) and also some chirpy Irving Gertz music. Obviously it’s historical tosh but that doesn’t matter. Fun is fun.
PrevPreviousJack McCall, Desperado (Columbia, 1953)
NextWar Paint (UA, 1953)Next