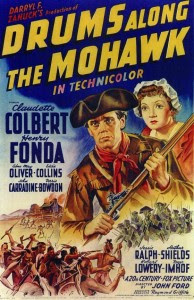 The success of Henry Fonda in Fox’s Young Mr. Lincoln, directed by John Ford, meant that he (Hank, not Abe) was an obvious choice to star in Ford’s next foray into the American past, to tell the story of how the United States were born. And this time it was based on a best-seller, was in Technicolor, had a big budget and there was a large cast. So, directed as the film was by Ford, and starring Fonda as it did, you would assume that this is a must-own, often-watch Western, right?

But it isn’t. It isn’t really a Western, at all for one thing. It’s a revolutionary war story set in rural New York state in which Gil Martin (Fonda) goes off, leaving posh new bride Lana (Claudette Colbert) on the farm, to win independence from the British and their Tory and Indian allies. For another, it’s a slow-moving plodder, with occasional flurries of action, and the script is uneven, rambling and unfocused.

Fonda is superb, although no great demands were placed on him by the script or story. In his biography of John Ford, Scott Eyman makes an interesting point:
Ford would use Fonda in a very different way than he would use John Wayne. Wayne’s characters were earthy and warm, brawlers by temperament, capable of love and rage. Fonda’s characters burned with a cold fire – they displayed strength, but a removed, abstracted, rather asexual strength, tempered by the actor’s instinctive austerity.

However, apart from Fonda, the rest of the acting is pretty middle of the road. La Colbert (who in fact got top billing) thought acting meant pressing the back of the hand to the forehead and sighing. Her performance is desperately old-fashioned. The support actors were only a little better. John Carradine looks splendid as the evil Tory villain in an eyepatch (maybe he borrowed it from Ford) but he has so little to say or do he doesn’t get a chance. Ditto Ward Bond, though he is cheerful. Dear old Russell Simpson was always wheeled out whenever a Mormon or Quaker elder was needed or any kind of minister. He had been ‘rediscovered’ by Ford after a long career in silent Westerns. Here he is a snuff-taking doctor. John Ford’s elder brother Francis Ford, his career now in a vertical decline, was given a bit part as Joe Boleo, a member of the community. He has a few more lines than usual and a strong Irish accent is noticeable. Chief John Big Tree had been doing his comic “Hallelujah!” Indian chief act for Ford since The Iron Horse and was still to be doing it in The Searchers thirty years later. Here he gets one or two Hallelujahs.

Gil takes his posh new bride back to the cabin
.
It’s all either corny or bland – not a good combo for a Western. Among the non-Fonda cast, only Edna May Oliver as the old lady shows any depth and is worthy to act alongside Hank. She is strong and memorable. “I’ve got a long face,” she says, “and I poke it where I please.”
.
. 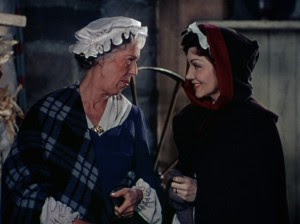 She pokes it where she pleases

.
There’s some decent Bert Glennon and Ray Rennahan photography (especially during the chase when Fonda is outrunning the Indians to get help), and both received Oscar nominations, though Ford was always ambivalent about color.  Utah stands in effectively for upper New York State. The Alfred Newman score also does the job. 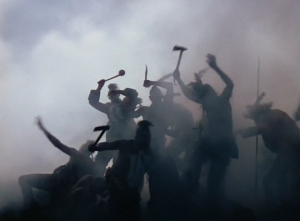 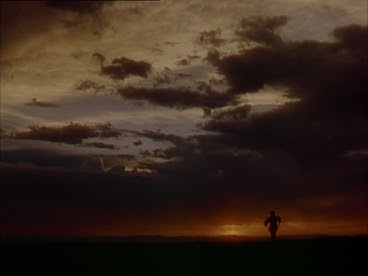 .
Gil’s heroic run saves the day: in a scene reminiscent of Francis Ford’s movie The Invaders (John often borrowed from Frank) the troops arrive just as the Indians are climbing the wall of their fort.
.
. 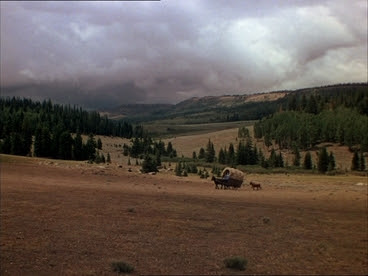 ‘New York State’
.
But the characters are mostly one-dimensional and the movie is hopelessly naïve. The women all scream hysterically when the Indians come; both the Indian and the Negro salute the American flag sentimentally (difficult to know what they were getting out of Independence).This is not Ford at his best, by any manner of means.
.
. 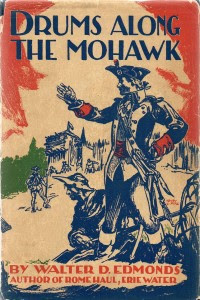 The source novel
.
The screenplay had been through too many typewriters, even that of William Faulkner (though his treatment was the furthest removed from the final product). The story was largely structured by Darryl Zanuck, who tinkered endlessly with the script in a very hands-on way. He wanted, he said in a note, to GIVE A SHOW (Darryl’s caps) and MAKE ENTERTAINMENT. As usual, except on his later movies, Ford himself also made quite radical changes and cuts as he went along. It’s a hodge podge. There are moments when you catch yourself wondering, ‘This can’t be John Ford, can it?’
PrevPreviousThe Lone Hand (Universal, 1953)
NextSaddle the Wind (MGM, 1958)Next