It is a truth universally to be recognized that James Garner was likeable. Everyone loves James Garner. Even your granny was a Maverick fan. But like so many greater or (usually) lesser American stars in the late 1960s and early 70s, when the big-screen Western was in decline, Jim set off to Europe to make an Italian ‘western’. He’d made some fairly minor but not at all bad big-screen oaters in the late sixties, such as Hour of the Gun (when he was Wyatt Earp) and Support Your Local Sheriff! But the allure of a fistful of post-Eastwood spaghetti dollars was too strong.
.
. 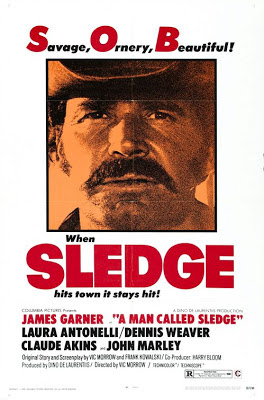 .
On the plane to Spain with him were Dennis Weaver and Claude Akins. They were pretty popular too. See Dennis in a Stetson and you can’t help thinking of Chester in Gunsmoke. Claude was also a Western regular and one thinks particularly of his charismatic bad guy opposite Randolph Scott in Comanche Station or his lowdown killer being locked up by Sheriff John Wayne in Rio Bravo.
Sadly, the plot, writing and filming were all either slow or weak and sometimes both in the same scene. It was directed by Vic Morrow and Giorgio Gentili (uncredited), and Morrow co-wrote it with Frank Kowalski and Massimo D’Avak. Morrow was from the Bronx and had played a punk in Blackboard Jungle, thereafter being typecast as a B-movie heavy. This was his second of two movies as a director. It isn’t very good. Kowalski would write the story for Bring Me the Head of Alfredo Garcia but didn’t write anything else. He wasn’t very good either.
You know it’s a cheap spaghetti from the first second because of the crudely post-dubbed clip-clops as a horse walks along. All the sound and dubbing is lousy.
Garner eschews any Maverickan or Rockfordian charm to play Luther Sledge, the steely, ruthless and 1970-mustached leader of a gang who is after a load of gold (as was usually the case in spaghettis). After a stage robbery gone wrong in the first reel, Sledge and his sidekick Mallory (Tony Young, the undercover cavalry agent in Gunslinger on TV) retire to the 3Ws saloon where, while Sledge is in bed with Rita (Laura Antonelli), Mallory gets shot in the back for winning at poker, and Sledge, in his scarlet long-johns, comes down and wipes out the other players, in pique.
.
. 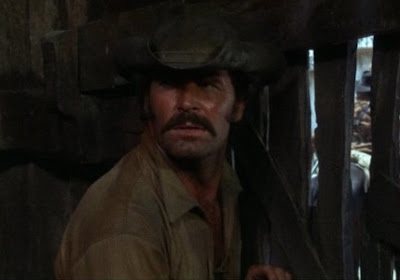 Tough-guy Garner
.
There he meets Old Man (they only ever call him that), an elderly ex-con, the excellent John Marley, one of the better things about this picture, though the quality of the writing and directing is such that he can’t really do anything good. Marley was, you remember, Jane Fonda’s dad in Cat Ballou (as well as the movie man who becomes bedmates with a horse’s head in The Godfather). Old Man tells Sledge about a huge shipment of gold which is kept in a prison cell.
After failing to thwart the huge posse that guards the gold, led by a mountain man for some reason, Sledge gets the bright idea of getting incarcerated and of course his cell is right next to the one with the gold in. His accomplice Ward (Weaver) has posed as a US marshal (having the frock coat to prove it) and bizarrely insisted on being locked up with Sledge, and together they launch their scheme, letting the prisoners out so that while they are being shot down by guards Sledge’s gang can make off with the bullion.
Then of course gold fever infects the gang and greed destroys them leaving only the man called Sledge, regretful and disappointed.
Rather like the viewers.
It’s amazing to me now that people ever liked these spaghetti westerns (they don’t deserve a capital W). I never did, when they came out or since. They were so bad, what did anyone see in them? But they filled theaters for a year or two, I’ll give them that. Oh well, no accounting for taste, I guess. I know there’s quite a following for the genre still.
Garner would fly back to become Nichols on TV and appear in all those Maverick spin-offs like Young Maverick, The New Maverick, Bret Maverick, Maverick, and so on, probably Maverick Rides Again. He sure milked the franchise. Weaver would appear in various weak TV remakes of Western classics like The Virginian and High Noon. Akins also only really got bit-parts in TV Westerns afterwards. It was all rather sad really.
PrevPreviousAngel and the Bad Man (Hallmark TV, 2009)
NextGoodnight for Justice: Queen of Hearts (Hallmark TV, 2013)Next

PrevPreviousAngel and the Bad Man (Hallmark TV, 2009)
NextGoodnight for Justice: Queen of Hearts (Hallmark TV, 2013)Next
Jeff Arnold © 2022 – All rights reserved – Designed by BetterCallChris
Scroll Up