The Westerns of Glenn Ford

‘Doing nothing well’ is my definition of a good actor 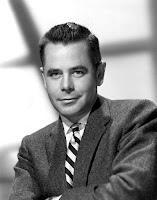 Glenn Ford was one of the greatest of all Western actors. He appeared in a long series of cowboy films, 26 altogether, and in all of them, even the ones of uneven quality, he was outstanding. He was strong and tough. He was ideal in the role of a man who’s gotta do what a man’s gotta do. Quiet, even taciturn, speaking with measured tones, he was the perfect Westerner. He rode supremely well, as if he and the horse were one. He underplayed in an almost Gary Cooper-like way and once said, “Some actors count their lines as soon as they receive a script. I’m the opposite. I try to see how many lines I can whittle down…You can say just as much in 4 as you can in 14.” He also said, “If they tried to rush me, I’d always say I’ve only got one other speed, and it’s slower.”
“When I was a young actor,” Glenn said, “I followed Spencer Tracy’s advice, ‘Learn your lines, hit your mark, don’t bump into the props, and do the scene.’ That’s all a good actor needs to know in my opinion. ‘Doing nothing well’ is my definition of a good actor. One of the great misconceptions about this business is that you get in front of a camera and ‘act.’ That’s the very thing an actor should not do. Be yourself–people need to identify with you. If they’re not able to, you’re in trouble.”
Glenn Ford was born in Quebec in 1916. His parents were of British origin and his mother was Welsh. In fact his real first name was Gwyllyn, not perhaps the most Hollywood-friendly of handles (the idea of ‘Glenn Ford’ came from the Canadian town of Glenford, his father’s home). The family moved to California when Gwyllyn was eight and he went to school in Santa Monica. He became a naturalized American citizen in 1939.

.
.
He was a remarkably handsome man and became one of the movies’ biggest stars. The high point of his career was really the late 1950s, and he was voted the number-one box-office attraction in 1958, though he worked through into the 1990s. More than just good looks propelled him, though. He was a talented actor, best known for playing the part of an ordinary guy tested by extreme circumstance. Why he was never even nominated for an Oscar, never mind win one, is a mystery.
He acted in various theater companies in his early twenties before landing a contract at Columbia in 1939 under the astute Harry Cohn. He appeared in two ‘light’ Westerns in 1941, both entertaining, Texas and Go West, Young Lady, the former with his great pal William Holden – Ford and Holden were among Cohn’s first ever contract players. Then he interrupted his career to enter the US Marines. He did manage to do one Western in the war years, The Desperadoes, in 1943, Columbia’s first color film, with Randolph Scott, which was big, noisy, fast-paced and fun.
.
. 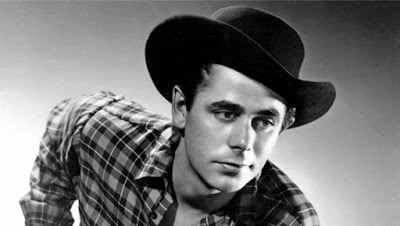 The young Glenn Ford in The Desperadoes, 1943
.
His war service was based in San Diego and related to film, in the Photographic Section, and he did public relations work. After the war, in 1946 he shot to fame with the noir Gilda, appearing opposite the stunning Rita Hayworth, one of the most beautiful women Hollywood ever found. He made 66 dramas and 39 comedies, so Westerns, of which he ‘only’ made 26, were not what he is necessarily best known for. If you ask many non-Western fans (such people do exist) to name a Glenn Ford film, they might well say The Big Heat or Blackboard Jungle, or maybe The Teahouse of the August Moon. But for us, civilized, thinking, intelligent Western buffs, we only have to hear the name Glenn Ford to think immediately of such great pictures as Jubal, The Sheepman or 3:10 to Yuma.

.
.
His first post-war Western was the 1948 psychodrama The Man from Colorado, with William Holden again, and in many ways this was his first ‘serious’ Western. The others till then had been lighter pictures, very well worth a watch but hardly great films. The following year, 1949, Lust for Gold was the highlight, an unusual movie in which Ford put in a stunning performance opposite an equally fine Ida Lupino. In both of these films Ford played (with great skill) a man on the edge of madness.
The 1950s started with The Secret of Convict Lake and The Redhead and the Cowboy, both in 1951. The first was a classy little noir Western with feminist tinges and the second was a rather slight, lighter picture, a little in the vein of Texas and Go West, Young Lady that he did before the war. In this period it’s better to emphasize The Man from the Alamo and The Violent Men, well-made, gripping Westerns of quality. In both he played a man unwilling to turn to violence but determined and resourceful when he had to.
In 1955 he starred in a semi-Western, The Americano, for RKO. This film commits two cardinal sins against the genre: it is set outside the American West and occurs in modern times. Still, it’s part of the Ford canon and it does get more and more cowboy as it goes along. It even ends with a classic Western showdown.
.
. 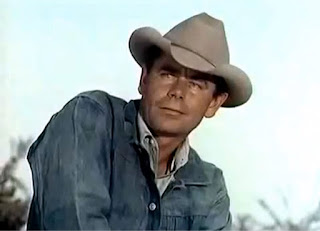 In 1955 he was The Americano
.
In 1956 came the rather lurid The Fastest Gun Alive, with a ridiculous Broderick Crawford fanning his double-action Colts. It really wasn’t very good, though Ford lifted it. But now Glenn entered on a period of Western greatness.
Jubal (1956), directed by Delmer Daves, the George Marshall-directed comedy Western The Sheepman (1957) and 3:10 to Yuma (1957), also directed by Daves, were all outstandingly good examples of the genre and Glenn Ford was magnificent in them. This was the apogee of Glenn’s Western career. 3:10 is a good candidate for the best ever Glenn Ford Western and it is certainly one of the finest of the 1950s.
.
.

And in ’57 he was The Sheepman
.
Cowboy in 1958 wasn’t quite up to that standard, despite also being directed by Daves. Based (loosely) on Frank Harris’s My Reminiscences as a Cowboy, Ford’s fourteenth Western, and Daves’s eighth (depending on your definition of Western), benefits from an excellent performance by Ford as a leathery, domineering cattle baron, playing opposite a young Jack Lemmon as Harris, the Chicago hotel clerk who inveigles his way onto Ford’s cattle drive as a partner and has to learn the business the hard way.
In the early 1960s Glenn headlined in the Anthony Mann-directed Cimarron remake (1960), not perhaps a great Western, more of a soap really, but popular. Another George Marshall comedy Western, Advance to the Rear,  followed in 1964. And then came the charming, almost elegiac The Rounders with Henry Fonda in 1965.
.
. 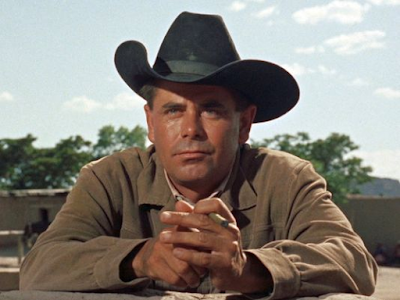 .
Sadly, you could argue that The Rounders was really Ford’s last good Western. Frankly, A Time for Killing and The Last Challenge were both undistinguished late-60s Westerns and they were followed by Day of the Evil Gun, very ordinary, in 1968, and the Disney vehicle Smith!aimed at a younger audience in 1969.
Heaven with a Gun in 1969 was a return to form, quite a good Western. Ford played southwestern Sheriff Cade for one season (1971–1972) in a mix of western drama and police mystery in CBS’s Cade’s County, with the great Edgar Buchanan, another career-long friend. There were also made-for-TV films such as Santee  (1973) and The Sacketts(1979) when he was still good – he was always good – but he looked slightly overweight and past his prime. His last Western appearance was a small part as a sheriff in Turner’s not-great Border Shoot-Out (1990) when he was 74. At least he didn’t do Italian westerns!
Glenn Ford suffered a series of strokes and died at his Beverly Hills home in 2006, aged 90.
.
. 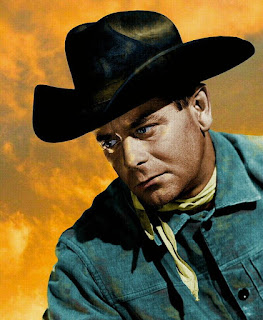 One of the best ever Western actors
.
He was credited with being the fastest gun in Hollywood, able to draw and fire in 0.4 seconds, faster even than James Arness.

As for the ‘what might have been’ department, Sam Peckinpah considered him for Robert Ryan’s role in The Wild Bunch. But then he considered pretty well everybody. It would have been interesting, though I doubt anyone could have outdone Ryan in that part. He was penciled in for Hondo in 1953 but backed out in favor of John Wayne when he heard that John Farrow was directing (they didn’t get on). That would have been interesting.

Glenn said, “The Western is a man’s world and I love it.” It’s a woman’s world too, of course, and women were among Glenn’s most ardent fans. In any case he graced the world of the Western, and if you come across a Western with Glenn Ford in it, you won’t be disappointed.
PrevPreviousThe Trail Beyond (Lone Star/Monogram, 1934)
NextJohn WayneNext