The first Western of Calhoun and Madison

You, dear e-reader, and indeed theater audiences in 1949 too, might have expected a cavalry Western named Massacre River to be full of action. However, this black & white Allied Artists effort is rather more of a torrid frontier romance, with a love triangle central to the plot.
Lts. Guy Madison and Rory Calhoun, real pals, both love the colonel’s daughter Kitty (Cathy Downs, a Fox player who was the eponymous Darling Clementine of John Ford’s Wyatt Earp saga and was Rod Cameron’s squeeze in Panhandle, but who later descended to cheapo 1950s sci-fi flicks). Kitty turns Rory down in favor of Guy. Rory is awfully decent about it.
.
. 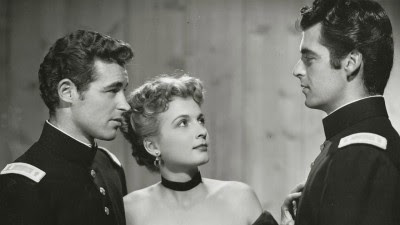 Rivals for Cathy’s hand
.
But then the triangle becomes a love quadrilateral because Guy meets and falls for a racy saloon gal, Laura (Carole Mathews, in her fifth of nine Westerns – she also did a lot of Western TV shows later, especially The Californians). This does rather complicate things.
.
. 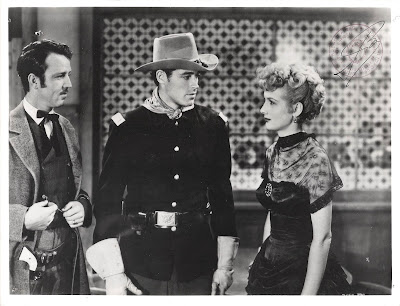 But then there’s the other woman…
.
There’s a hint of snobbery because Rory is a West Pointer and Kitty very posh while Guy, and of course Laura, are from the other side of the tracks.
There is a background of Indian trouble. Chief Yellowstone (Iron Eyes Cody) and Colonel Reid (Art Baker) want peace but the chief has trouble controlling his young hothead braves, who prefer the warpath. But honestly, this only really is a setting; the movie happens to be set in the Wild West but that’s incidental. It could just have easily been a gangster movie or a war film.
Still, to be fair, it does get a bit more Western in the last reel.
.
. 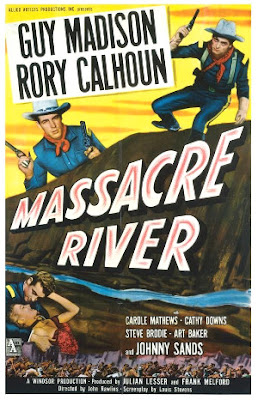 .
It was in fact Guy Madison’s firstWestern. Madison had been a handsome young actor spotted by David O Selznick late in the war. From 1951 he would be James Butler Hickok, with the portly Andy Devine as his comic sidekick Jingles, in one of the most successful radio and Western TV shows ever, Adventures of Wild Bill Hickok. This lasted for eight full seasons, pretty well all through the 50s, and Madison became really associated with the part. But he did a few big-screen Westerns between seasons, such as The Command, Reprisal! and Bullwhip. At the end of his career he did a good number of spaghetti westerns, which were not very good (to put it mildly) but hey, we all have our faults. Generally, though, he was OK in our beloved genre.
As for Calhoun, he was the same age as Madison and debuted at a similar time, having been spotted by Mrs Alan Ladd and getting a screen test at Fox and being also taken up by Selznick. Massacre River was his first Western too, so he and Madison were a real pair.  He featured in Fox’s A-movie A Ticket to Tomahawk, which was to have been a John Ford picture (but in the end wasn’t), and also with Robert Mitchum and Marilyn Monroe in the Otto Preminger-directed River of No Return, but then he became a mid-budget Western lead, and was very solid in the genre too. You might want to
try Utah Blaine, say, or The Siver Whip or Raw Edge, or, especially, the brilliant Dawn at Socorro.
.
. 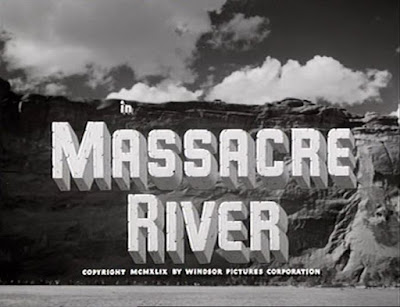 Nice AZ locations
.
So Massacre River does benefit from the leads. In minor parts you can also spot Franklyn Farnum, Kermit Maynard, Jason Robards Sr and Douglas Fowley. The problem isn’t the acting, more with the script and direction. The former was by Louis Stevens, who wrote a few Roy Rogers oaters but also quality work such as Streets of Laredo or Horizons West. This time, though, he couldn’t really break away from the six-gun romance aspect. The director was John Rawlins, a movie jack-of-all-trades who helmed a few so-so Westerns – like Fort Defiance or The Arizona Ranger. Competent, we might say, if uninspired.
The picture was shot by Jack MacKenzie in rather fine Canyon de Chelly locations in Arizona, with added use of RKO’s Fort Apache set, and the print quality is good. It’s in black & white, though some early prints were in Sepiatone. There are some luminous landscapes. Allied Artists had grown out of Poverty Row studio Monogram and had, well, I won’t say delusions of grandeur but let’s say grand ambitions to make A-pictures, and they did throw some budget at movies like this.
The New York Times wasn’t very polite about the picture, calling it “a snarled romance” with “stilted, amorous bickering” and added that it was “murder in more ways than one” but though it is very much a late 40s/early 50s oater, and rather more a ‘who’ll get the girl?’ picture than an action Western, Massacre River is nevertheless enjoyable, especially later on, and it has certain qualities. It’s interesting, too, as the Western debut of Guy ‘n’ Rory. Give it a go, e-pards!
PrevPreviousYoung Buffalo Bill and Young Bill Hickok (Republic, 1940)
NextDawn at Socorro (Universal, 1954)Next