.
Django? Rango? No, Drango.
.
.
Reader John Knight, commenting on my review of The Vanquished, recommended Drango, a late 50s Jeff Chandler Western which in some ways is a reverse take on the Reconstruction story in The Vanquished, and which also goes for a noir rather than a Southern-Gothic vibe.
So I watched it.
It was made by Chandler’s Earlmar Productions, the company’s only picture. “It’s no Indian story,” said Chandler. “Let Cochise rest in peace.” He had of course been Cochise three times in movies and had had enough. It is interesting though that in his Westerns Chandler almost invariably played an Indian or an Army man. In Drango (the ninth of his thirteen oaters) he is the latter.
I like Chandler in Westerns. A burly New Yorker, he nevertheless convinced as a Westerner. Though a good tough guy, he always seemed vulnerable somehow, or suffering some inner hurt. In this black & white mid-budget Western, which has a dark, intense tone, he is excellent as the troubled major trying to live down the war.
.
. 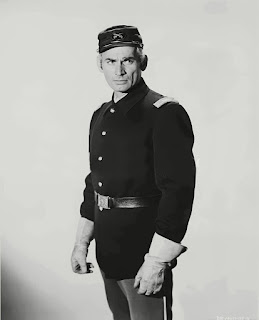 Jeff
.
The picture opens with scenes that simply must have influenced the Italian makers of spaghetti westerns like Leone and Corbucci (who were real fans of 50s American oaters) because if you took the opening of Drango, reshot it in lurid colors and added lousy post-dubbing it would be a perfect spaghetti. Even the title, of course: Drango is not far away from Django… And after a boy on lookout has shouted out to the townsfolk “They’re comin’!” we see Jeff galloping in, and just as the rather sensational DRANGO comes up on the screen so we hear a classic 50s ballad begin which would have been ideal for spaghetti. “Drango!” cries the singer, and the title song of Django runs through your head.
.
. 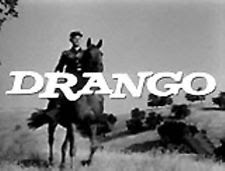 Drango!
.
But don’tconfuse Drango with Django (or Rango for that matter). For one thing, Drango is good.
Yes, it’s a Reconstruction story again. Westerns quite liked this theme. The Vanquished, The Texans, The Raiders, Three Violent People and Thunder over the Plains are just some other examples. There’s never anything good at all about Reconstruction. These post-Civil War Westerns are stories of crooked Northern carpetbaggers who exploit the noble Southerners. These Southerners are of course white, and if African-Americans appeared at all, it was as “cheerful darkies” who cheer the Confederates and ex-Confederates. There’s usually a a brave ex-soldier who stands up for Right and foils the carpet-baggers and their cronies. The intro text of The Texans tells us: “The South was ruled as a conquered enemy. Northern politicians wallowed in an orgy of power – of plunder … of tribute and tyranny and death.”
This time, though, there is a more sensitive take on the subject. The new military governor, Major Clint Rango (who thinks up these names?) – that’s Jeff, of course – is a decent man who genuinely wants to help the suffering town of Kennesaw Pass, Georgia. The townspeople, however, loathe the very sight of his uniform (townsman Chubby Johnson in a Confederate cap is often seen spitting at it) and will do nothing to help him, even at the cost of worsening their own suffering. Doh. But they had their reasons, I suppose.
.
. 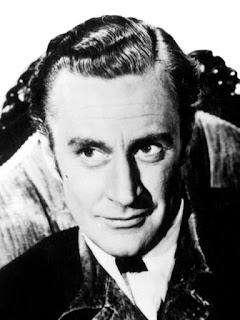 Villain Ron Howard
.
The major and his adjutant call immediately on Judge Allen (Donald Crisp) in his run-down mansion. Crisp, a favorite actor of John Ford’s, was never very suited to Westerns, I thought. Too posh, too English. He couldn’t handle a Westerner’s ain’t for the life of him. But he could get away with a judge role. Though Judge Allen is noble(-ish) he has a seriously slimy semi-insane son, Clay, played by another Brit, Ronald Howard (Leslie’s offspring), on his US debut. Both these Allens are not very welcoming to the new military governor because a matter of months before this Sherman had passed through and, they say, his men did not behave with the utmost decorum. In fact they sacked the place. But the younger Allen, the Howard one, doesn’t just hate the bluecoats; he has a plan to restart the war and this time the Confederacy will win.
Right away Drango bungles a case. Calder, a Unionist (Morris Ankrum), has killed a member of a Reb lynch mob in self-defense and he is afraid of being murdered as a result. Against the advice of Calder’s daughter Kate (Joanne Dru, with little make-up, unglamorous, stony), Drango convinces the man to stand trial. Only the decent doc (Walter Sande) will stand as a juror though. Everyone else, including the parson (Barney Phillips), says Calder should be hanged. While the governor is waiting to recruit some more jurors, Calder is dragged from his cell and in a grim scene (the mob have torches that give a KKK vibe) he is hanged by the townsmen, incited by Clay Allen. Kate blames Drango for her father’s death and hates him for it. But we sense she’ll come round… Actually, la Dru was a last-minute replacement for Linda Darnell, but I’m glad.
.
. 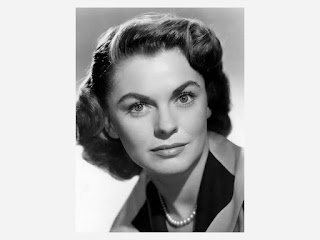 Joanne
.
Now we see Drango gradually sympathizing more with the town’s plight, and as he does so, the hatred of some of the more rational townspeople thaws. White townspeople, natch. As was usual with these movies, there are no African-Americans in the cast and slavery is not mentioned. It’s an entirely white affair. Still, we do see a slightly more nuanced view than was usual. Drango battles his own repressive high command (in the shape of Col. Milburn Stone) to get more food and medical supplies. He unconsciously tells the colonel that “we” won’t survive the winter without. “We?” says the colonel. The idea is that after the assassination of Lincoln the Army went for a harder line. This is rather the reverse of The Vanquished, where the local Army presence is corrupt but the top brass back at HQ full of integrity.
Drango sets up a school (though no children attend, thanks to their bigoted parents) and a hospital. Still, even the children spit at him. There’s an angry adolescent boy (David Stollery), maybe twelve or so, who has been left an orphan by the war and has to bring up his smaller siblings. He spits hard. But slowly, slowly, they come round, the newspaper editor, the parson, an old woman who hated Unionists viscerally, even the boy.
.
. 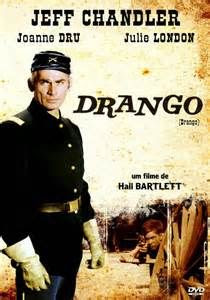 Worth the purchase price
.
There’s a sub-plot: Shelby Ransom (Julie London) is a Southern belle with her own mansion and she is Clay Allen’s lover. She provides Clay’s mob with shelter and financial backing. We can see she despises Clay, though. London was in several Westerns before her singing career took off, and very good in them she was, too, I thought. Tap Roots, Saddle the Wind, Man of the West and others all benefited from her charms. Drango’s aide, Captain Banning (John Lupton) falls for those charms and so there’s a neat pairing off – but the evil Clay will have to be disposed of first.
Well, it all comes to the inevitable climax and of course the bad guy is bested and the good guy gets the girl. No spoiler there, I think. From that point of view, it’s a case of ‘been there, done that’. But still, this Western has a thoughtful theme, an intelligent script and some good acting. And the direction, by Jules Bricken and Hal Bartlett (Bartlett also wrote it) is competent. Bartlett was the producer of Jonathan Livingston Seagull, but we can’t hold that against him. Oh, alright then, we can. He specialized in ‘social problem’ films. Bricken was a TV director, especially of Riverboat, and this was his only Western feature. I don’t know why they had two directors.
.
. 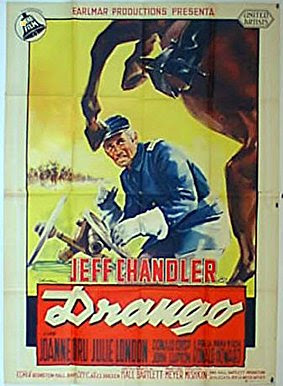 OK
.
The cheesy ballad at the top, sung by cowboy actor Rex Allen, was written by Elmer Bernstein, no less, with lyrics by Alan Alch. The rest of Bernstein’s score tends sometimes to the melodramatic but is often somber and grim, in keeping with the tone of the movie. Visually too, this grimness is enhanced by fine James Wong Howe cinematography of the Louisiana locations. What a masterly photographer Howe was.
A ‘minor’ Western, maybe, but well done and worth a watch.
PrevPreviousJack Slade (AA, 1953)
NextTown Tamer (Paramount, 1965)Next