.
Train vs. stagecoach
.
.
A standard plot device of Westerns is the idea of stage v. train. Dodge City opens with a race between the two conveyances, it’s a key element of Stand Up and Fight, the Marx brothers burned all the wooden cars behind the locomotive to win their race in Go West, and so on. You can probably think of other examples. The stagecoach represents the old world and the old ways while the train is symbolic of the thrusting future. Usually the train wins.
.
. 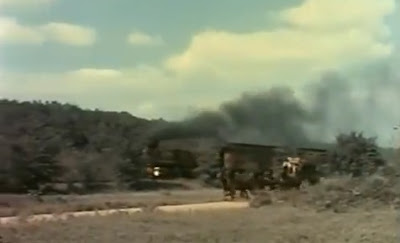 The stage races the train
.
Republic’s Rock Island Trail starts with stage passengers talking about the new-fangled train, “the darnedest contraption you ever seen”. Forrest Tucker, for once in a lead part and topping the billing, is the chief engineer of the new Rock Island line which races the stage from Chicago to Ottowa, with the winner getting the mail contract.
.
. 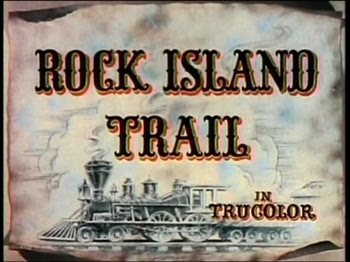 A great deal of fun
.
It’s all pretty standard fare, directed by Republic hack Joseph Kane (well, hack is maybe a bit harsh, let’s say steady hand) but it’s no zero-budget affair. It is a full 90 minutes and shot in Republic’s Trucolor, with some nice location photography by Jack Marta (though of course lots of studio sound-stage shots and cheap back projection). And it’s a lot of fun, too.
Chill Wills is the train driver. Bruce Cabot is the bad guy – and he has a derringer, so that’s good. Grant Withers is there too, as the heroine’s amusingly cynical dad. And Jeff Corey plays Abe Lincoln! Abe wins the case for the Rock Island by calling as witness a boy who fishes, Stinky Tanner (Jimmy Hunt).
.
. 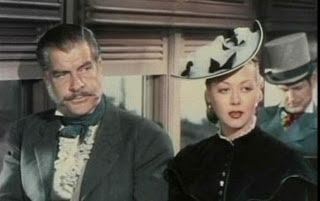 Posh Constance with her cynical dad
.
Forrest’s amour is the rather posh Constance, played by Adele Mara, regular of Gene Autry and Roy Rogers oaters. She gets to join in with a close-harmony quartet of singing waiters in a chirpy rendition of the title song. There’s plenty of skullduggery by Cabot and his henchpersons and wagonloads of Republic action. You could do a lot worse.
Cabot challenges Forrest to a duel in a saloon and Forrest chooses mops at dawn. That’s a good bit. Later he disarms Bruce of his derringer and uses it to shoot a hole plumb in the middle of the O of the HOTEL sign across the street. Bruce compliments him on his marksmanship and indeed, it was a remarkable shot, aka impossible.
.
.

.
At one point Constance’s bustle caches on fire. She claims to speak good English: she says, “I may as well be grammatical” but that doesn’t stop her committing the solecism of using most rather than more when asking whether he prefers her or his planned bridge.I find that people who insist on ‘good grammar’ often don’t have it.

There’s a major Indian attack and Forrest gets his Stetson pierced by an arrow. The train crosses a burning trestle. I tell you, most of the proper ingredients for a proper Western are there.
.
. 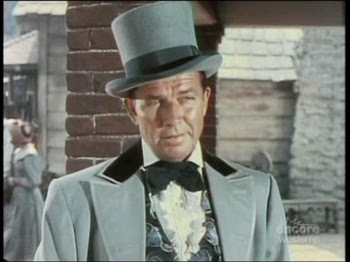 Cabot always an excellent bad guy
.
IMDb tells us that “The World Premier [sic] of the film was in the Quad Cities, USA, on April 27th, 1950. Republic stars took part in a pre-show promotional parade which extended from Silvis, Illinois, the Home Yard of the mighty Rock Island Lines, at the time the largest rail yard in the world, to the theater in Rock Island, Illinois.
This could be a must-see, e-pards, for the sheer gusto of it. And the derringer.
PrevPreviousThe Last Outlaw (HBO, 1993)
NextThe Texas Rangers (Columbia, 1951)Next