.
A real dud
.
.
A lifelong fan of Randolph Scott Westerns, your Jeff finds it difficult to find much positive to say about Randy’s mid-40s RKO effort, Belle of the Yukon. It’s probably alright if you like musical screwball comedies. Is that positive enough?
There’s an amusing intro, which augurs well:
If it’s blood you want
And cold you want
And the call of the Klondike night
If it’s mud you want
And gold you want
Or what Robert Service would write…
You’re in the’ wrong theater, brother!
.
But that’s about as good as it gets.

Scott (left) was very popular, though he always only seemed to get the lead in mid-budget pictures or back up top stars in big-budget ones. Two
Westerns before, in 1942, he had supported John Wayne in the rollicking and
successful The Spoilers, and perhaps he thought that another Alaska tale would hit the spot in ’44. But it was a flaccid dud.
Part of the fault lies with his co-star, Gypsy Rose Lee. The burlesque artist (let’s be polite and call her that) was not a good movie actress and seen today she reminds me chiefly of Boy George in looks. The character she plays is also unsympathetic – arrogant and egocentric. She only has one song, ingénue Dinah Shore taking the lion’s share of the tonsil-work. Shore’s songs Sleigh Ride in July and Like Someone in Love had, as Bosley Crowther in The New York Times put it, “a vogue on the radio”. They come across now as very 1940s-schmaltzy indeed.
.
. 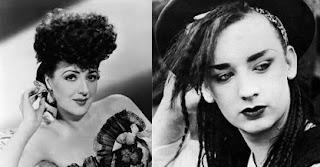 Boy George                 Gypsy Rose Lee
.
It’s too complex a story to tell here, and I haven’t the patience. Suffice to say that it involves romance, bank robbery and skullduggery in and around the fancy Klondike saloon owned by Honest John Calhoun (Scott). The saloon provides the context for the songs, though fortunately there are only four.
Scott went through the motions. Probably the best part was that of Guinn ‘Big Boy’ Williams (below, in a studio publicity shot) as the crooked and lazy town marshal. Williams was usually entertaining and had quite a gift for comedy. The role, though, would have ideally suited Edgar Buchanan. 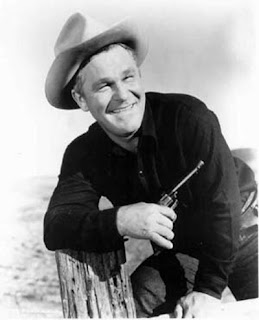 .
It’s all in bright Technicolor, shot by Ray Rennahan, though there are almost no location shots, the action being largely confined to the studio-built saloon interior.
.
. 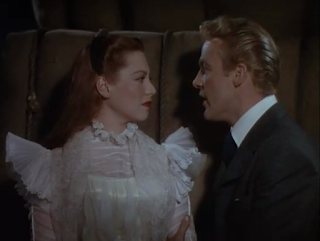 Shore and Marshall, rather less than stunning
.
Bob Burns as a visiting conman and Charles Winninger as Calhoun’s saloon manager and father of the Shore character both ham it up too much, going for slapstick. William Marshall as Shore’s paramour is bland to the point of the glacial. ‘Below the line’, often uncredited, you get the likes of Hank Bell as a barman, and Kermit Maynard and Jack Perrin as saloon patrons, but you only fleetingly spot them.

The whole shebang was directed by William A Seiter (amusing photo, right), a Keystone vet who found fame directing such acts as the Marx brothers, Abbott & Costello and Laurel & Hardy. You wouldn’t really think so, though, while watching Belle of the Yukon. It all rather falls flat. He had directed Scott in a (non-Western) musical comedy back in ’33, Hello Everybody!, but that was no better.
Bizarrely, James Edward Grant wrote it. Again, you would never have guessed. Wayne pal Grant was capable of classy work such as Hondo, Angel and the Badman and the classy comedy The Sheepman.
In fact, it’s hardly a Western at all. No gun is fired, for example. Sad to give a Randolph Scott picture a negative review, but it doesn’t deserve more. Sigh. 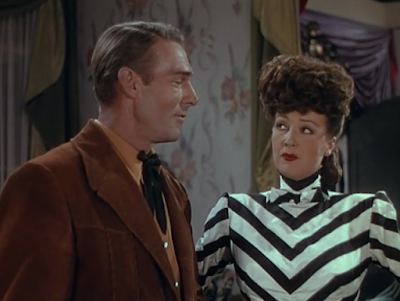