Crazy Horse, Tȟašúŋke Witkó in Standard Lakota Orthography, was one of the most legendary of American Indians. His very name is redolent of Western myth and he ranks with Sitting Bull, Cochise and Geronimo as one of the best known of his people. He has been referred to as a genius of war, a lover of peace, a statesman, a mystic, even as a Sioux Christ (and this idea was heightened by his being betrayed at the end by his own disciple). 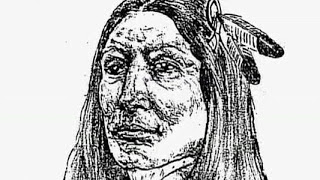 There is no authenticated photograph of Crazy Horse. This is a sketch made by a Mormon missionary in 1934 after a discussion with his sister.

Crazy Horse on the screen
Of course the movies and TV have made much of him. Think of Victor Mature as Crazy Horse in the George Sherman-directed 1955 Universal picture Chief Crazy Horse. Poor Victor: he was actually surprisingly good in Westerns but he really wasn’t very convincing as the Oglala mystery man…
.
. 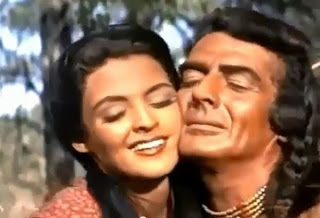 Victor Mature as Crazy Horse. Oh dear. Here he is with Black Shawl (Suzan Ball, Lucille’s cousin); the movie makes no mention of his true love, Black Buffalo Woman, another man’s wife.
.
.
There was Fox’s Crazy Horse and Custer: The Untold Story in 1990, with Michael Dante as Crazy Horse. There was a TV movie in 1996, with Michael Greyeyes in the role. Of course Matt Clark had to meet him on Stories of the Century (I don’t think there was a famous figure of the Old West that Matt didn’t meet – or capture) in 1954. George Keymas was Crazy Horse then. And so on.
Reading
There is a perhaps surprising amount you can read to find out about the life of Crazy Horse, considering how few hard facts there really are known about him. His own people thought him a mystery while he was alive (one of his many names might be translated as Our Strange Man) and he was known for his modesty, shyness and preference for being alone. He certainly avoided whites as much as possible, had no photograph of himself taken and we don’t even know for sure when he was born.
That hasn’t stopped writers discoursing at length on his life. In 1906 and ’07 Judge Eli Ricker interviewed people who knew Crazy Horse. Journalist Elinor Hinman and Nebraska writer Mari Sandoz did something similar in 1930 – 31, when of course those who knew him were very old. Sandoz wrote a 428-page-long novelistic biography, Crazy Horse: The Strange Man of the Oglalas, in 1942. Professional historian Stephen Ambrose went one better in 1975, at 528 pages. Since then there have been many more biographies, often of great length.
.
. 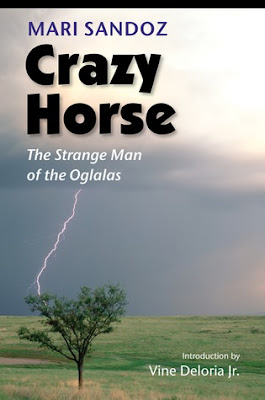 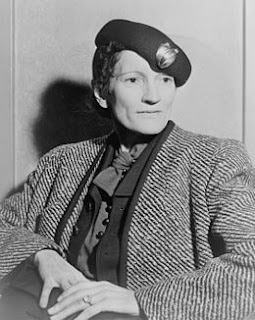 Mari Sandoz and her book
.
.
All of them seem to have no problem putting words into the mouth of Crazy Horse, clearly a man of very few words, or even telling us what he was thinking. I waded through the Sandoz because, well, you gotta, but I must say I found it hard going. I know she’s a great American writer and all but these ‘poetic re-imaginings’ aren’t really my thing, however beautifully they are written. And it just seemed interminable.
For me, by far the best read is Larry McMurtry’s Crazy Horse: A Life in the Penguin Lives series. Yes, Mr McMurtry is a novelist too, and a very fine one, but he is also an excellent writer of non-fiction. He manages to stay factual yet bring a good novelist’s readability to a book. And most blessed of all, it’s short. 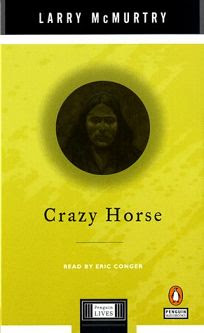 The best book
.
.
Why do most books have to be so long these days? The thing is this: I reckon to read about fifty books a year. It may be fewer if I’m into Victorian novels or Russians, it may be more if I’m rattling through some Elmore Leonards or Luke Shorts. But it’s roughly one a week, on average. Now, let us imagine our reading life as a reasonably sentient being at, say, sixty years, even seventy. That’s still well less than 4000 books in total, leaving aside all those earnest volumes you rushed through at college to complete the next essay. 4000! That’s a minuscule fraction of what’s been written. So I am just plain resentful of a writer who wants me to plow through a weighty 600-page tome on a subject that interests me. It’s selfishly taking too great a share of my exceedingly limited reading time. So there. 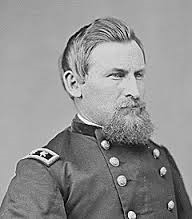 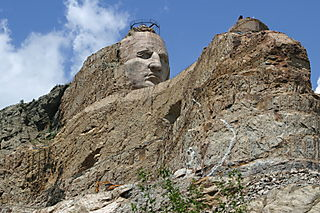 The giant monument slowly takes shape
.
.
Crazy Horse has benefited from never dealing with the whites, attending no peace councils and refusing to travel to Washington. He was entirely true to his culture. This may be one of the reasons he has become such a symbol to Native American peoples today, and indeed to many Americans of all creed, color and origin.
.
.
Sorry if this post is too long…