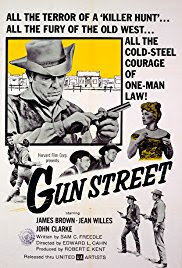 Gun Street is a low-budget black & white Western with an unstellar cast and all the appearance of a TV show. It’s disappointing.

The taglines, All The Terror Of A ‘Killer Hunt’… All The Fury Of The Old West… All The Cold-Steel Courage Of One-Man Law!, were frankly misleading.

It was a Robert E Kent production. As I said the other day when reviewing this movie’s companion piece Gun Fight, released earlier the same year, Kent was a prolific writer and producer of lower-budget movies of all kinds and was involved in one way or another in a good number of Westerns. To be fair, there were some reasonably good ones among them, such as Utah Blaine, the screenplay of which he wrote from a Louis L’Amour novel, and he worked a good deal with George Montgomery on his less-than-brilliant but nevertheless solid oaters. But he also wrote and produced a few clunkers, and I fear Gun Street will be found in the Clunker rack in DVD stores.

It stars James Brown (no, not that one) as a sheriff trying to be Matt Dillon. Brown was an athlete who made his name in war movies and then in 1954 became Lt. Rip Masters in the very popular TV show The Adventures of Rin Tin Tin. After that his career didn’t exactly skyrocket. Apart from these two Kent Westerns in 1961, it was largely occasional appearances in TV shows. 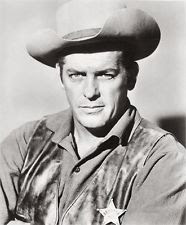 Trying to be Marshal of Dodge

He has a deputy, played by John Clarke, a forgettable TV actor; this was one of only two big screen Westerns he appeared in. 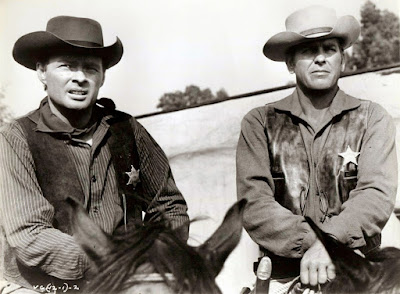 They learn that a townsman who had been jailed for life (Warren Kemmerling) has broken out of the state pen, killing a guard, and is heading for town. There, his ex-wife (standby Peggy Stewart) is now married to the local doc (John Pickard), who has adopted the killer’s son. There is supposed to be a sense of threat but it’s all rather bland.

Tension is supposed to build in the final reel as a posse pursues the killer into the Californian rocks but viewers hoping for a Winchester ’73-style shoot-out will be sorely disappointed. The ending might be described as bathos, if you were being polite. Weak and trite would be other words. 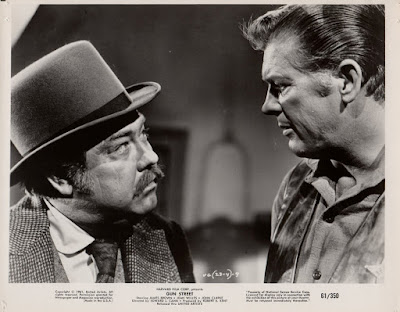 It was written by Sam Freedle, who had been a ‘script clerk’ on High Noon but that really was the height of his Western fame. The screenplay of Gun Street is ponderous, not helped by the actors stodgily delivering the lines. Sam Freedle allowed himself the joke of having the deputy named Sam Freed. 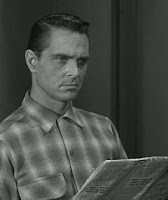 Edward L Cahn (right) directed. Cahn, born 1899, had been in movies since 1917, was a Universal editor and started directing in the early 30s. He became something of a cult figure in the 50s when he turned his attention to trendy teenage rebellion films and schlock science-fiction (with a special penchant for zombies). He didn’t direct a great number of Westerns in his long career but he started well, with the 1932 Law and Order, the good one with Walter Huston and Harry Carey, though it did rather go downhill from there. he never did anything as good again. These two 1961 Kent B-Westerns were his last as director. He looks rather serious in the photo, doesn’t he? As if pondering the philosophical weight of his Westerns. Sadly, there wasn’t any.

You could watch Gun Street, if you absolutely had to. But with the best will in the world (and anyone will tell you I have that, hem hem) I couldn’t call it art.