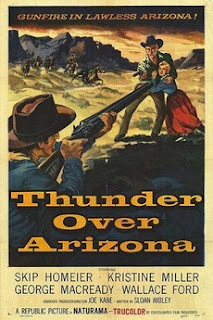 There’s no thunder and it was shot in California. Never mind, I thought it was a lot of fun.

It’s a straight-down-the-trail old-school Western with some great character actors and directed by Joseph Kane, credited as “Joe Kane”, unusually. Kane got a producer credit too, as he usually did. No one would pretend that Joseph Kane was a great director of Westerns, I mean John Ford he ain’t, but he did solid work for many a year. He had started writing silent Westerns in the 1920s, directed his first – a Gene Autry picture, Tumbling Tumbleweeds – in 1935 and churned them out at Republic at a rate of seven or eight a year for the next couple of decades. There really wasn’t an A-picture among them. In fact Scott Eyman has written that he was “a man who made more than one hundred movies without an interesting shot to be found in any of them.” I think that’s a bit harsh, though. Old Joe (below) was a reliable workhorse as far as Westerns went. 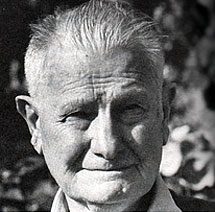 As a Republic Western of the period you might have expected, I don’t know, Rod Cameron, say, or maybe Jim Davis to star. But this one had Skip Homeier topping the bill. Now Skip was, as any Westernista will tell you, a specialist in punk kid roles. He had started by shooting Jimmy Ringo in the back to get a rep in The Gunfighter in 1950 and had punk-kidded his way through any number of Westerns since. Want a punk kid? Call Skip. Later, as time passed, he graduated from punk kid roles to just punk. But he was always a minor character. Now for the first (and only) time he was the hero. Unfortunately, Skip as a good guy? It just doesn’t work. They had to make him semi-bad: he kills hired assassin Shotgun Kelly (George Keymas in an all-too short part) and assumes his identity. But once in Tombstone he starts being decent, righting wrongs and so forth, being heroic and all, so it didn’t work at all. 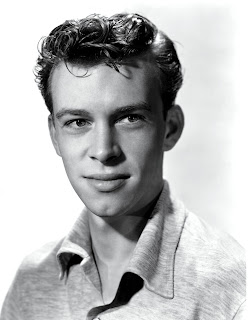 Instead, the baddies in this one are corrupt and incompetent lawmen, notably John Doucette and Jack Elam, so that sent the movie shooting up in my estimation. Their boss is the crooked mayor, George Macready. I always like George. He had specialized back in the 40s in upper-crust, authoritarian and ambitious villains for Columbia. The excellent Coroner Creek was his first Western but he went on to do several more with Randolph Scott and then became a stalwart of TV Westerns. He’s really excellently nasty in Thunder Over Arizona, though sadly didn’t ever pull a derringer – you feel that a derringer would be ideal for such a frock-coated crook. 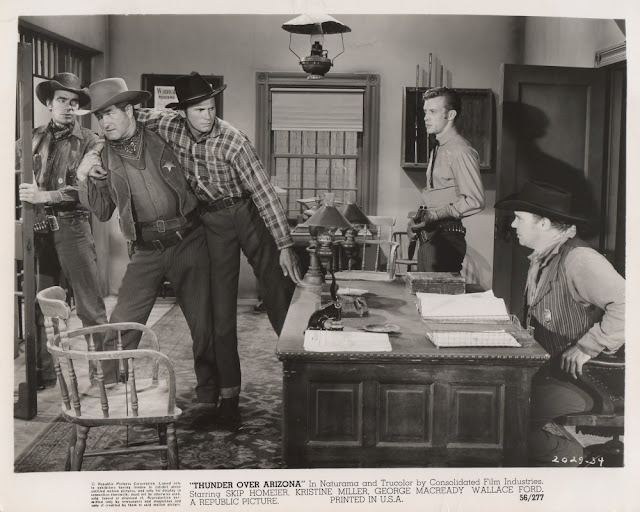 Jack Elam far left, Sheriff Doucette in the chair, Skip standing next to him

His sidekick is the dubious lawyer Wallace Ford, another who was always entertaining. He occasionally shows a spark of decency, or at least regret for his foolish teaming up with the slimy Macready, so he is allowed to live at the end. 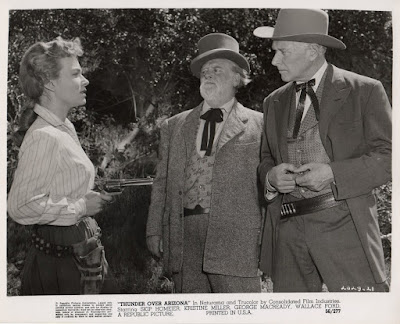 Crooked Mayor Macready, far right, and his sidekick lawyer Wallace are held up by the glam Kristine Miller

Hank Worden has a tiny part and I am sure I spotted Glenn Strange the Great towards the end.

There’s a token dame, played by second-billed Kristine Miller, the pretty (if you’re allowed to say that these days) daughter of a millionaire oil magnate who grew up in Argentina and Denmark, was multilingual and was spotted by Hal B Wallis who was then just joining Paramount. She was in four Westerns before becoming Margaret Jones on Stories of the Century in 1954. This was her first oater since. 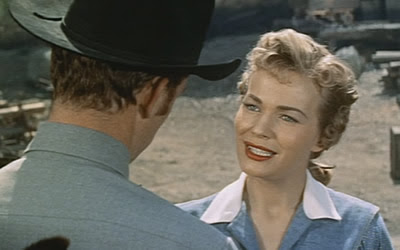 The story is set in Tombstone but could have been anywhere: it’s just a generic plot about a crooked town boss who wants the whole valley, you know how they do, and the brave hero joins up with the good guys to thwart him. There are no Earps or anything.

It’s in color and in Naturama, no less! 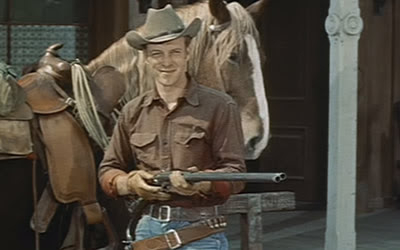