Very disappointing
.
.
When you get a modern Western with an estimated $25m budget, famous actors and it’s ballyhooed as a fine film, you expect more. Yet if you watch Jane Got a Gun you get a dull, overlong and rather derivative Western with nothing new to say.

The first major problem I had with it was the utterly appalling DVD. It was one of those discs which begin with an endless trailer for some junk action movie which you simply can’t turn off. When you press MENU you get ‘Operation not allowed’, as if to suggest, how dare you? Then you can’t turn the subtitles off. That is so annoying. So whatever you do, if you want to watch this movie I strongly advise you not to buy the TF1 Video DVD. It’s so bad that I almost wanted to send it back and demand a refund. 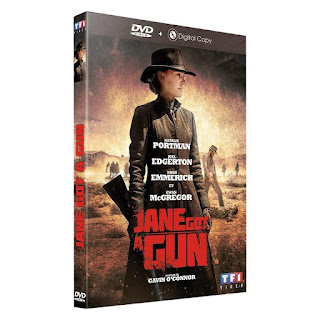 Do not buy this DVD. It’s really bad.

Then of course you get a seemingly endless series of logos of all the companies involved in the making of the picture. I would have dropped off but my blood pressure was rising.

Finally we get some ‘action’ but it’s a really boring beginning, with a mother telling her children a (very long) story. It may have sent the kids to sleep effectively but unfortunately it has the same effect on us.

This sets the tone for an over-talky picture, death to a Western. A psychological Western in which character interplay is the whole point is OK if you have fine acting and directing, and above all top-notch writing, but none of the above apply here. 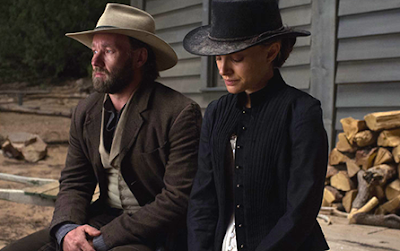 Loads of dull talking like this. Even the actors look bored.

Soon you discover that those subtitles, so annoying at the start, are essential. The sound is so bad and the actors’ diction so poor that without them you won’t understand a word of what is said. And I had to have the sound at 90 even to hear it. (And no, I’m not deaf).

Really, I was hardly in a mood to appreciate the finer points of this movie, if there were any.

Visually, the picture has a high yellow wash. It makes it look like an Australian film, even though it was shot in New Mexico. Shame on DP Mandy Walker and/or others responsible for reducing that stunning New Mexico terrain and gorgeous pink light to a canary yellow glare. If only they’d got John Bailey or Oliver Stapleton, or anyone good.

There are too many flashbacks. We are used to a non-linear narrative these days and the odd flashback is OK to explain a backstory but this picture flits back and forth in a way HG Wells would have envied.

The director was Gavin O’Connor, who was known for Warrior. This is his only Western. He has said, “I want to be making films that are somehow born out of me that are stories I want to tell. The challenge is figuring out how to do it where you can make them personal, yet still deliver to an audience a film experience that is satisfying and emotional, and that’s what I’m trying to do.” Mmm, well, I’m sorry to tell you, Mr O’Connor, that this member of the audience found Jane Got a Gun neither satisfying nor emotional. 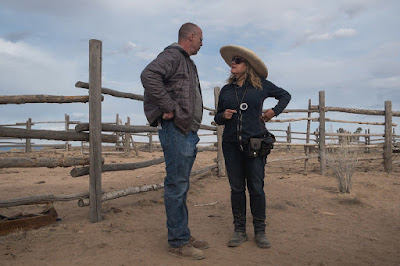 Director O’Connor with DP Mandy Walker. Both should go back to film school.

The original director, in 2013, was Lynne Ramsay, the We Need to Talk About Kevin helmsperson, but she left after only a few days of shooting and some key cast members followed her. Then the movie’s distributor, Relativity Media, lost the rights to the picture in a bankruptcy proceeding and the film was finally released by Weinstein, without screenings for reviewers. (Maybe wisely). Even the première was a disaster: it was scheduled to be in Paris, the night of the Bataclan attacks. The whole project seemed to be what the French call “un film maudit.”

New Mexico, 1871. It’s a triangular tale of a woman, Jane Hammond (Natalie Portman, who was much better in Cold Mountain, or anyway Cold Mountain was a much better film) who enlists her former lover Dan Frost (Australian Joel Edgerton, from Star Wars II & III) to protect her and her wounded husband Bill (Noah Emmerich, the FBI agent from Americans, in a difficult part because he’s mostly in bed). 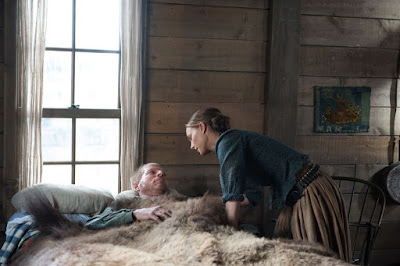 Hard to act when you’re in bed all the time

The bad guy is played by Brit Ewan McGregor, an incredibly chameleonlike actor, I think; I have just been watching him play two brothers in the TV Fargo. You have to look twice at any character he plays before you even notice it’s Ewan. 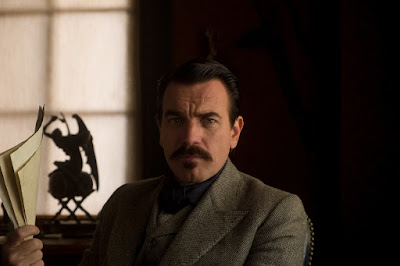 Ewan is the bad guy (Jude Law was an earlier casting)

Of course it’s the woman who gets the gun, in that modern way, and Jane reminds of us of Cate Blanchett in The Missing or Rosamund Pike in the more recent Hostiles.  I don’t know if this is a specifically feminist agenda but Jane is just a farmer-with-a-gun, really. She happens to be a woman but there’s nothing otherwise new in the character. And she still depends on her ex (a man) to use the gun she got. 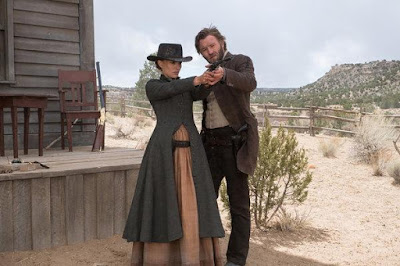 Shooting lesson, as seen in many Westerns

There are quite a few references, so director and writer had probably seen a Western or two. For example, Jane’s early flashback life has tinges of Hannir Caulder about it. She fails to hit anything with a revolver and so goes for a long gun to blast the target away, as Clint did in Unforgiven. The cabin is shot full of holes through the sunlight pours so someone had seen the likes of Silverado and The Proposition.  At the end Jane, Dan and her two daughters set off in a wagon for a new life in California, à la Hondo, The Tin Star, Yuma, Face of a Fugitive or indeed any number of other Westerns.

It’s 98 minutes long, not a huge runtime these days, but still those 98 minutes drag because of the lack of pace and action.

The New York Times review called the picture “a somber slog” and remarked that we “can’t tell whether the movie’s reluctance to serve up a rousing climax is the result of poor planning, or some kind of declaration of principles.” The New Yorker review said “this poor little movie fires blanks. It never wanted to be a Western at all.” The Austin Chronicle reviewer said something similar: “Jane Got a Gun is more romance in an Old West setting than Western with a romantic angle.” How depressing is that? The review adds that it was only “mildly engaging” and said, “Jane’s gun barely grazes its target.”

Of course some reviewers liked it. But I didn’t.