Duke in a top hat

Westerns went for the In Old… title. Back in 1929 Warner Baxter had won an Oscar for his part as the Cisco Kid in the early talkie In Old Arizona. Ken Maynard was down In Old Sante Fe in 1934. Roy Rogers was ridin’ In Old Caliente and Fred Scott In Old Montana, both in 1939. Hopalong Cassidy was moseying along In Old Colorado in 1941. Duke himself, after In Old California, would make a companion piece, In Old Oklahoma, the following year.
.
. 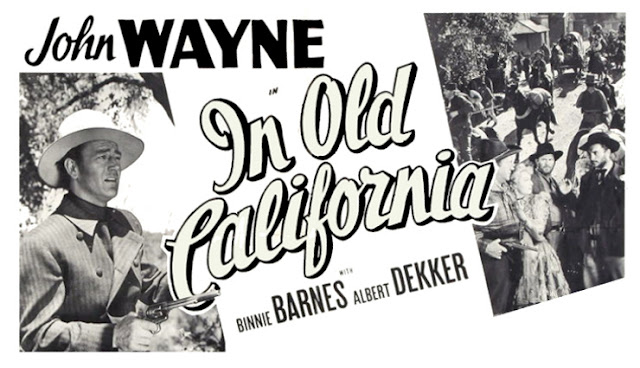 At Republic in the late 30s Wayne had been making one-hour programmer Westerns that the lesser studios churned out for the largely juvenile market, and had achieved some fame leading in the Three Mesquiteers series. But in 1939 it all changed when John Ford ended his long ostracism of Duke and cast him as the Ringo Kid in Stagecoach, which became a big hit. Suddenly Herb Yates, Republic’s shrewd boss, realized he had a star on his hands. He brought Stagecoach co-star Claire Trevor back and made Republic’s biggest-budget Western ever, Dark Command, featuring stellar MGM actor Walter Pidgeon on loan, and directed by Raoul Walsh.  So by the early 40s Wayne was quite a name and was drawing in the crowds. In Old California was certainly no magnum opus Dark Command, and it was also overshadowed, because though it was filmed at the end of 1941 (just at the time of Pearl Harbor), it was released the same month, May ’42, as Universal’s big and boisterous The Spoilers, with Marlene Dietrich and Randolph Scott as well as Duke. Still, though, In Old California is a lot of fun, 88 minutes of good Sepiatone black & white chock-full of action. 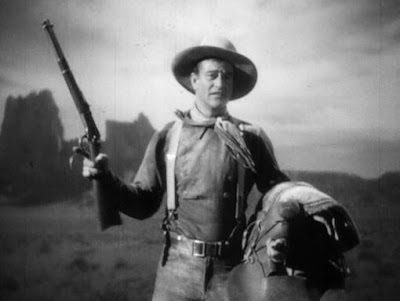 Second in the cast list was British-born actress Binnie Barnes, usually ‘the other woman’ but occasionally doing female lead. She had, for example, been Alice Munro in the Randolph Scott version of The Last of the Mohicans in 1936. She plays the Dietrich-esque singer-saloon gal Lacey, while the more prim-and-proper girl who is rival to Lacey for the attentions of Duke is Ellen (Helen Parrish, former child star who had been a little girl in The Big Trail, also starring Wayne, back in 1930 and had done something similar in Cimarron the year after). So it’s one of those Westerns in which you wonder which gal will win the hero’s hand. As if we care. 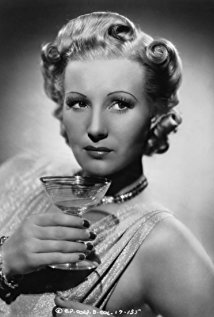 Third-billed as chief bad guy Britt Dawson was Albert Dekker. In Old California was his second oater and he would return In Old Oklahoma the following year. He was back in California with Barbara Stanwyck and Ray Milland in 1947. He was OK as good-guy Bat but really he was really good as a heavy in a suit, and in this one, oh joy, his weapon of choice is a derringer. 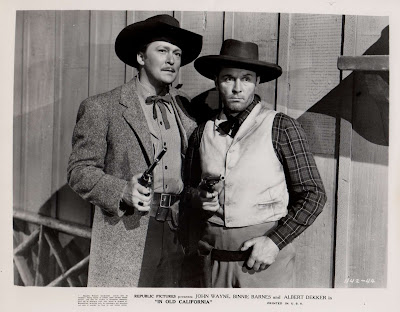 It’s an 1848/9 story and opens when polite top-hatted Boston pharmacist Tom Craig (Wayne) enters a San Francisco saloon and asks for milk. Naturally the other patrons mock him but less so when they see him bend a coin in the fingers of one hand. The saloon empties (except for the druggist) when rampaging Kegs McKeever comes in with a raging toothache. When the Bostonian is able to soothe the man’s pain with some ointment (oil of cloves?) the wild bull Kegs becomes a docile lamb, and attaches himself to Craig as factotum/sidekick in gratitude. They set off for Craig’s new career as a drugstore owner in Sacramento. 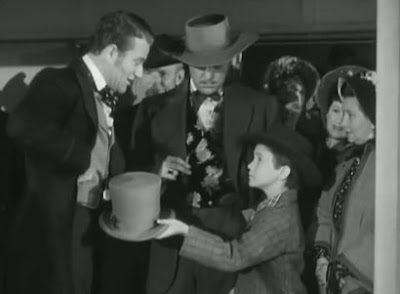 Duke gets his topper back

Wayne’s father was a pharmacist and that possibly contributed to his accepting this role.

On the way to the ship they meet Lacey, leading a parade of admirers and servants carrying her porcelain bath tub. Craig gallantly carries her across a muddy street, earning the displeasure of Dawson, her intended. So much so, in fact, that Dawson has the druggist thrown overboard and he has to make his way to the capital on foot. He finally gets there but all the property owners have been warned by Dawson, who is crooked boss of the place, not to let any building to Craig. Finally, though, he meets up again with Lacey in her saloon (where she sings a racy little number, California Joe) and she agrees to rent out a place she owns to him, as partner. So it’s all set up for a love-triangle. 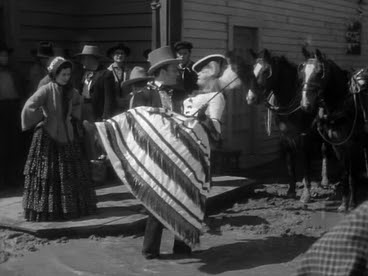 Or quadrilateral. Enter the fair Ellen, who turns Craig’s head with her looks and by faking a faint gets him to shower attentions on her. Lacey is jealous. Meanwhile, as a sub-plot, Lacey’s feisty maid Helga (Patsy Kelly) has set her cap at Kegs. She will marry him, if he likes it or not. This is the comic-relief. Helga does have a good way of taking the washing down. She shoots the clothes-pegs with a revolver. She quick-marches Kegs off to the preacher, “or my handbag might go off.” (She has her six-gun in it). 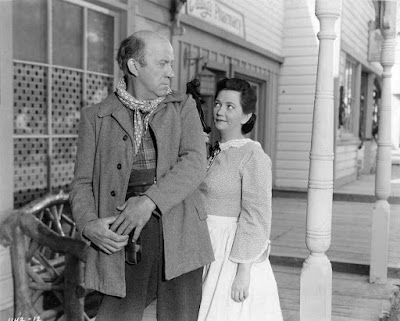 The top hat has disappeared. It’s a Stetson now. The cowboy-hat Stetson hadn’t been invented yet, but never mind. 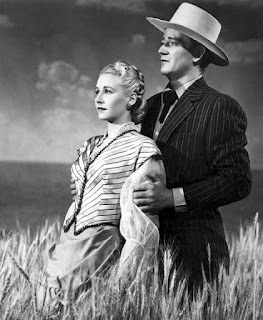 Britt Dawson’s depredations get out of hand (he goes around shooting farmers with his derringer) and his brother Joe (Dick Purcell) is just as bad as Britt, if not worse. Craig whips up a posse to fight back. So there’s plenty of action. At one point there’s a wagon chase very like the one In Old Oklahoma.

Well, Craig’s business is going well. His is the only drugstore in town and there’s no doc. But evil Britt Dawson spikes his famed tonic with poison. The first casualty is the town drunk Whitey (Emmett Lynn) but the townsfolk are furious. They could all have been killed. It being a Western, what is their first response? “Get a rope!” They will lynch the druggist. A hanging is the immediate knee-jerk response of all Western mobs, just as today a strike is the very first thought that comes into the minds of disgruntled French workers. But just as the wagon is about to be whisked away from under his feet, leaving him dangling from a tree branch, a rider gallops into town yelling “Gold!” (so I suppose we must be in 1848) and the townspeople suddenly are distracted. Phew.

Now, Ellen is winning the war and Craig is so far besotted with her, despite her rather arrogant ways, that he finally proposes. Lacey’s nose is distinctly out of joint. 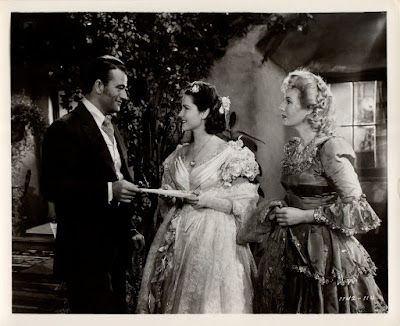 What with the poison scandal and all, Craig’s shop has to close down and he seeks out Britt Dawson for a saloon brawl (an essential ingredient of all Wayne Westerns of the time). But the new Marshal Alvin Thomas (Robert Homans) breaks it up and throws Craig in jail.

Lacey refuses Britt’s proposal (she is disgusted with him and really loves Craig) and sets off for the goldfields, where typhoid fever has struck. She rolls up her sleeves, wipes off her make-up, Dietrich style, and starts nursing the sick. When Craig hears about it, he persuades the marshal to release him, loads up wagons with medicines, raises the townsfolk again and sets off in a large convoy to help, much to the annoyance of Ellen, who gives him an ultimatum: me or the miners. Of course it’s no contest. It’s off to the camp of Bear’s Claw to bring succor to the gold miners.

Now Britt really loves Lacey and wants to go save her from the risk of infection but brother Joe steps in as chief baddy, mortally wounding his brother and taking over leadership of the gang. So it’s all set up for a thrilling showdown, with mucho shootin’ and gallopin’. I shall not reveal the ending, dear e-reader. My lips are, as ever (well, nearly ever) sealed. But I can tell you it does not end in tragedy for the druggist and the saloon gal. Doubtless they lived happily ever after. Or not. 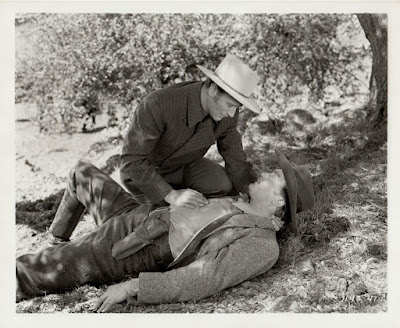 The whole shebang was directed by William McGann, director of Warner Bros Bs through the 30s who was not really a Western specialist but the same year did the Richard Dix oaters Tombstone, The Town Too Tough to Die and American Empire. He certainly got pace and action into his pictures. Republic stalwart Jack Marta was the DP. He was the regular on Robert Livingston programmers and also did Gene Autry and Roy Rogers oaters, as well as those Three Mesquiteers thrillers with Duke. 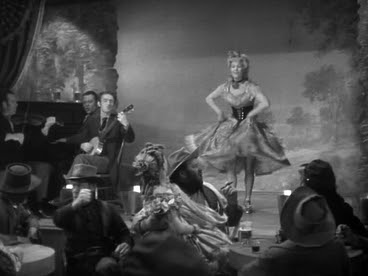 The writers were Mesdames Gertrude Purcell and Frances Hyland, from a story by good old Gladys Atwater. Gertrude and Gladys seem to have had a lot of fun.

I enjoy these 40s black & white Westerns Wayne did for Republic (though one or two were on the stodgy side, especially those in which Yates’s consort Vera Ralston was imposed on Wayne as female lead). In Old California and the sequel In Old Oklahoma are zippy pictures which still entertain today. 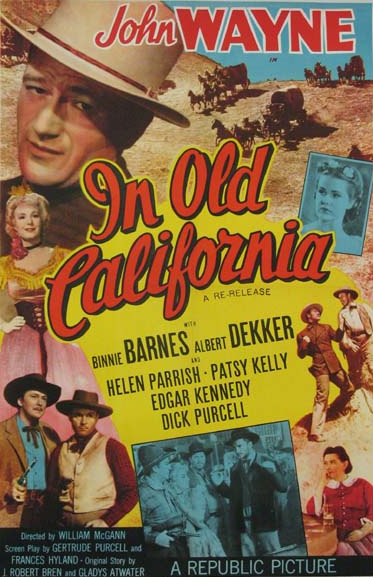 PrevPreviousThe Woman of the Town (UA, 1943)
NextHell Bent for Leather (Universal, 1960)Next

PrevPreviousThe Woman of the Town (UA, 1943)
NextHell Bent for Leather (Universal, 1960)Next
Jeff Arnold © 2022 – All rights reserved – Designed by BetterCallChris
Scroll Up