The Ballad of Buster Scruggs (Netflix, 2018)

I’m not sure if The Ballad of Buster Scruggs was originally planned as a Netflix series but it is presented as a film. It is a sequence of six tales, or the verses of a ballad, only very tenuously linked (hardship and death being a common thread, as well as the occasional thematic reference), and it resembles a book of short stories. Indeed, the rather beautiful introductory screen shows us such a handsome Victorian volume, with the hand of an unseen reader turning the opening pages, you know how they used to do in movies.
.
. 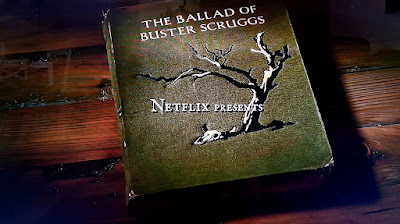 Put together, these six segments (they call them segments) do make the film rather long, at 2 hours 13 minutes, and I might have been tempted to axe one, but still, a Coen brothers Western is a must-see, and in fact it didn’t drag, partly because of brilliant editing.

It opens with the title track, as it were, and indeed songs will feature largely, throughout. Buster Scruggs, aka The San Saba Nightingale, is seen, all duded up, riding his intelligent horse Dan through Monument Valley singing Roy Rogers’s Cool Water to the strains of his classic 1930s guitar. We are most definitely in Rogersland or Autryland (though San Saba was Tommy Lee Jones’s birthplace in Texas). We know the actor impersonating Scruggs because the Coen brothers used Tim Blake Nelson in Oh Brother, Where Are Thou? in 2000. However, as soon as this singing cowboy arrives at a ratty saloon in the middle of nowhere, all resemblance to a courteous crooning cowpoke disappears as he shoots all the dirty denizens (inc. the barman) dead. 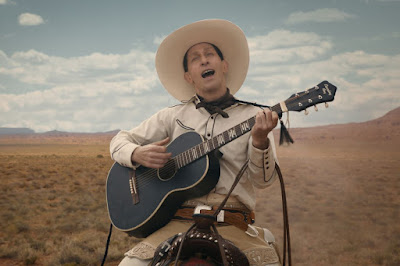 Continuing his way, and breaking the so-called fourth wall  by addressing us, the audience, Scruggs arrives in Frenchman’s Gulch, where he is asked to check his hardware before entering the saloon, which he does, including a brace of derringers strapped to his boots, his “señorita pistols”, as he calls them. He sits in at a poker game but declines to play the hand offered him for it is aces and eights, and we Westernistas know what that signifies, do we not? One of the other players, Joe (Clancy Brown) takes umbrage at this refusal and, in defiance of the local norms, is armed. Buster resorts to “downright Archimedean” tactics, before launching into a rendition of Marlene Dietrich’s song Little Joe (here renamed Surly Joe in honor of the curmudgeonly and late card player) from Destry Rides Again, complete with call & response, dance and gestures.

He is now called out by the dead man’s brother (Danny McCarthy) and a Main Street quick-draw showdown ensues, followed by the arrival of a mysterious stranger in black playing a wailing harmonica (Willie Watson). So many references. We are clearly not in Autryland but in Pasticheland.

Chapter 2, if we may call it that, is darker. It opens with a bank which is even more isolated than the saloon in Chapter 1. It is in the middle of nowhere. A Jack Elam-ish customer (James Franco) enters and engages the garrulous clerk (Stephen Root, also in Oh Brother) in (a rather one-sided) conversation. The inevitable robbery ensues, or rather attempted robbery, for the bank teller is prepared. There follows a knight-in-home-made-armor moment. So far, so semi-comic but the lynching that follows is more somber and the attack by Indians which interrupts it is sanguinary. The would-be robber is left on his horse, his hands tied behind his back and the nag feeling like wandering off, which will leave him dangling. We’ve seen this before too. It really happened to Judge Roy Bean. 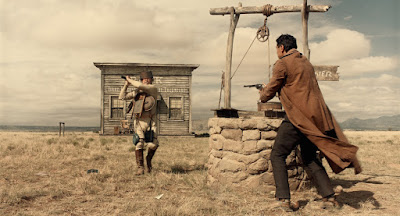 The Indians in this segment and in the wagon train one are perhaps slightly eyebrow-raising to modern audiences but this film isn’t really a Western; it’s a film about Westerns. So old-style ‘savages’ are the thing.

A passing cattle drive saves him, but not for long. We end with a mass hanging, with nods to Goin’ South and Hang ’em High. For me, though, this would have been the episode to cut.

The third segment isn’t just somber, it’s utterly tragic. So much so, in fact, that it’s hard to watch. It concerns a traveling show with a ragged Liam Neeson (who, when drunk, sings The Sash My Father Wore) as its owner/manager and English actor Harry Melling as the armless and legless fellow who recites snippets of Shelley, Shakespeare, the Bible and the Gettysburg Address for the small change of an ever-diminishing audience. 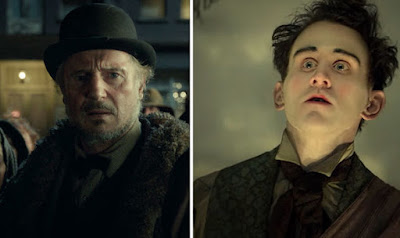 I can’t really say more without giving it all away but I will say that I found this part very moving and it cast a dark shadow over the whole film.

This segment is based on a Jack London story and features an entertaining Tom Waits as a grizzled old prospector who, naturally, sings in a croaky voice (Mother McCree, in fact). This part of the film is a bucolic hymn to the natural beauty of the American West (it looks like verdant Colorado) but of course humans can’t wait to get in to this paradise and rape the land for minerals. With some skill the prospector identifies what he calls “Mr Pocket”, i.e. a pocket of gold. “I’m old,” he cries at the pocket, “but you’re older!” 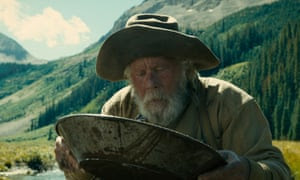 Owls were often omens in Westerns (the more Indian-y Westerns anyway) and an owl in this one is also a symbol and a portent. The only other character in this part, a young man (Sam Dillon) now appears and brutally shoots the prospector in the back. Anything for gold, you see. This is the mythic West of the American dream where riches are to be had for the taking. The prospector himself has some respect for nature. But it won’t last.

The Gal Who Got Rattled

Well, we’ve had the gunslinger showdown, the bank robbery, hanging and cattle drive, the traveling show and the grizzled prospector; it’s time for the wagon train. You can see the Coens are determined to get through every classic Western situation. It features remarks about chicken dumplings and Grandma Turner, so the Coens are happy to reference their own Western too.

In a segment inspired by a story by Stewart Edward White, Alice Longabaugh (probably not a relative of the Sundance Kid) is the eponymous girl (Zoe Kazan) and once all human impediments are out of the way – the “nervous cough” of her brother (Jefferson Mays) turned out to be really quite nervous – she can entertain a proposal from, and accept, Billy Knapp (Bill Heck), the genial wagonmaster.

Billy casually offers to murder Alice’s dog President Pierce, whose yapping has annoyed the wagon trainers, but he either bungles it or deliberately lets the mutt go (which I prefer). In either case the animal escapes death, for the moment. 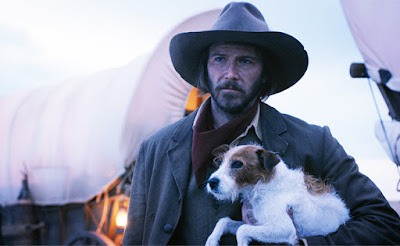 There’s a tragic ending, however, when Billy’s partner Mr Arthur (Grainger Hines), who is a “man who knows Indians” and wily in the ways of the West, fights off an attack but something happens. The character concerned “hadna oughta did it”, but did.

The last segment also features death. What’s missing after the above Western contexts? Why, a stagecoach, of course.

It’s rather a Victorian melodrama, this part, filmed in an almost black & white, occasionally blue & white. It’s good to see Saul Rubinek aboard, back from Unforgiven.  He is the Frenchman, and there’s also an Englishman (Jonjo O’Neill) and an Irishman (Brendan Gleeson), like a joke. You know, “An Englishman, an Irishman and a Frenchman are traveling on a stage…” There is also a salty and ‘musical’ trapper (Chelcie Ross), whose stories offend a prim religious lady (Tyne Daly). 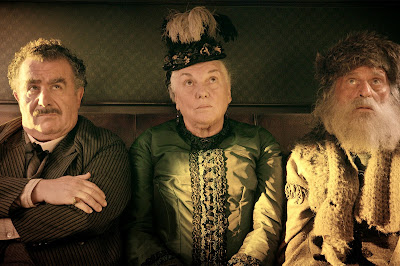 The Englishman and Irishman are bounty hunters (bounty hunters had to figure too) and have a sixth passenger, a corpse, on the roof of the coach. Though this is the only segment in which no one dies, it is essentially only about death. Indeed, there is a smack of the supernatural about this tale. Are they perhaps all dead?

There’s a melancholy Streets of Laredo. And there’s another True Grit reference when the Midnight Caller features.

Throughout, we get rich True Gritty Victorian vocabulary and the Coens clearly revel in it. Equally, the scenery, costumes and production design are splendid. Above all, we get the Coen brothers’ famed playing with light and dark: the same film comprises the silly whimsy of the Buster Scruggs segment with the unutterable tragedy of The Meal Ticket. But that’s the Coens for you, and fans will expect it. As The New York Times reviewer put it, “As if the morbid jokes were really existential riddles all along, and we were only laughing to drown out the terror.” 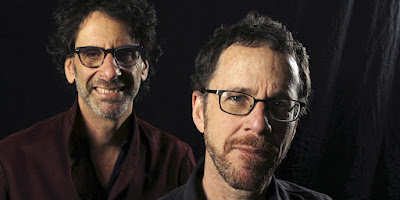