Stanwyck and McCrea in harness again

.
.
The pairing of Barbara Stanwyck and Joel McCrea, with Brian Donlevy in support, was a success in Paramount’s big Manifest Destiny picture Union Pacific in 1939, directed by Cecil B DeMille, and in ’42 the studio tried again, with another Manifest Destiny frontier tale, The Great Man’s Lady. 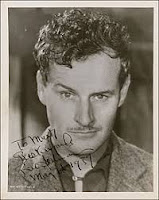 This time they had William A Wellman (left) direct, and there’s no denying he was a class act, especially with the talented William C Mellor as DP. Wellman directed four silent Westerns in the 1920s, then a Richard Dix oater for RKO in 1932, The Conquerors, and he was one of those credited for Viva Villa! in ’34. Also in the 30s he helmed the Clark Gable version of Call of the Wild and the 1936 biopic of Joaquin Murrieta Robin Hood of El Dorado with Warner Baxter. Several of these can only be called Westerns by a stretch of the definition, and the same is true of The Great Man’s Lady. Later, Wellman would do true Westerns such as the splendid The Ox-Bow Incident (1943), Buffalo Bill, again with McCrea (1944), Yellow Sky with Gregory Peck in ’48, and the outstanding Westward the Women with Robert Taylor in ’51. Across the Wide Missouri, again with Gable, the same year, and lastly the fine Track of the Cat with Robert Mitchum were probably Westerns. It was a mixed bag; they weren’t all good. But there were some fine examples of the genre in there. 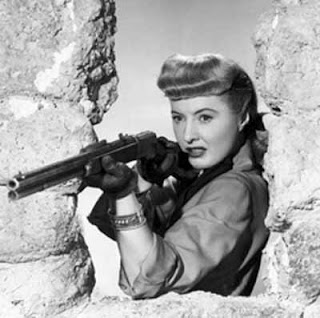 Before lording it (or ladying it) over The Big Valley on ABC for four seasons 1965 – 69, Stanwyck (right) did twelve Westerns or semi-Westerns, starting as Annie Oakley in 1935 and being paired with Ray Milland (California), Wendell Corey (The Furies), Gary Cooper (Blowing Wild), Fred MacMurray (The Moonlighter), Ronald Reagan (Cattle Queen of Montana), Glenn Ford and Edward G Robinson (The Violent Men),
Barry Sullivan (The Maverick Queen and Forty Guns), and three with McCrea (Union Pacific, The Great Man’s Lady and Trooper Hook). She also did a few episodes of Wagon Train and Rawhide. So she evidently liked the genre. Many regard her as a great star, and indeed she was four times nominated for Best Actress Oscar, but myself I don’t care for her in Westerns much. I would make an exception for Trooper Hook, in which I think she was very good, and perhaps also for The Great Man’s Lady. McCrea himself said, “Stanwyck should have gotten an award for this film – if ever anyone deserved it.”

The picture only achieved modest box-office success. Perhaps the public were expecting a rip-roaring Western and were disappointed by the slightly slushy and soapy flashback life. (There are actually too many flashbacks and flash-forwards, perhaps to show off Stanwyck’s old-lady bravura; it would have been dramatically better to have had just one early on and another towards the end). The Great Man’s Lady is much more about the lady than the great man. In fact McCrea only appears in about half of it (though he is very fine when he does). It takes as its thesis JM Barrie’s play What Every Woman Knows, three times filmed, that behind every great man there is a woman. But the picture is only vaguely feminist in a 1940s kind of way; the woman here is an adjunct, a support, rather than a true person in her own right, and seems happy to be so. 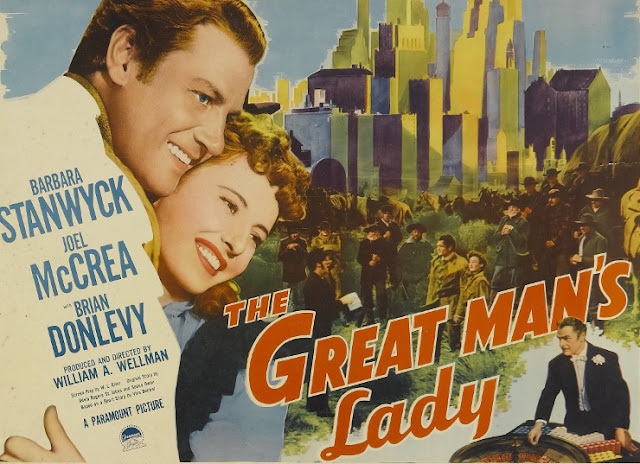 Visually, the picture is strong, thanks to Mellor’s mastery of black & white, though the vast majority is shot on studio lots and such a sweeping founding-of-the-West story really needed wide-open panoramas and Fordian landscapes. The couple of exceptions, such as the flash flood which overturns the stage or the long wagon train wending its way to found Hoyt City, are rather fine and show what Wellman could have done, given the scope (and budget). 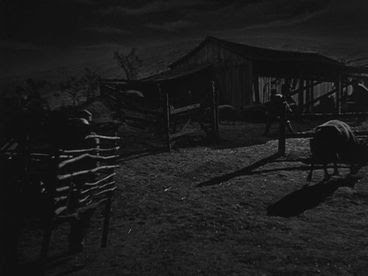 DP Mellor on good form, despite lack of locations

It starts in the (then) present day with a more than hundred-year-old Hannah Hoyt, widow of the founder of Hoyt City (somewhere in the West), on the day an equestrian statue of her husband, Ethan (McCrea) is to be unveiled. Pushy journalists are sent packing by the grande dame but an exception is made for a singularly wet young biographer who is clearly romantically in love with her subject (KT Stevens, daughter of director Sam Wood). This girl is so silly you want to shake her and tell her to get a life. 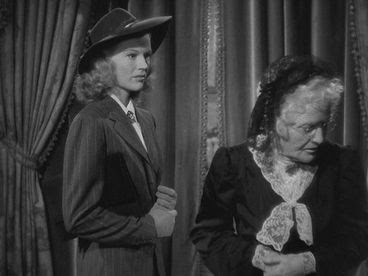 After that the film flashes back and forward for ninety minutes as the old duck reminisces, encouraged by the breathless biographer. I must say that Stanwyck’s performance – and her make-up, by Wally Westmore – are remarkable. She manages to be a centenarian and a giddy girl in Philadelphia in 1848, and both in a convincing way.

Donlevy was an interesting fellow, who had a colorful career, but he was another who never quite convinced in Westerns, in my opinion. He would be, in 1946, a lousy Trampas to McCrea’s The Virginian and he was laughably miscast as Grat in When the Daltons Rode. He was good in the genre when he could be a smoothie heavy in a saloon, preferably with a derringer. That was the case in his first Western, Barbary Coast (also with McCrea) in 1935, and was again the case in Destry Rides Again and Union Pacific, both in ’39. He was also quite good as the no-good gambler in the Jacques Tourneur-directed Canyon Passage in 1943. In The Great Man’s Lady he plays, yup, a smooth gambler in fancy clothes, Steely Edwards. He’s basically a decent man who loves Hannah but understands that her heart is given to Ethan. Here, Donlevy gives a rather touching performance. 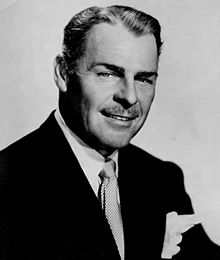 Not good in Westerns generally but not bad in this picture

Hannah has a pompous Philadelphian dad, Mr Sempler (good old Thurston Hall), who has betrothed her to an equally stuffy and cautious (and middle-aged) Mr Cadwallader (Lloyd Corrigan). But she is in love with the dashing buckskin-clad young man who comes calling, Ethan Hoyt. Hoyt has dreams of Westward expansion and founding a city across the Mississippi. They elope, daringly, and Hannah becomes a frontier woman – and a crack shot. 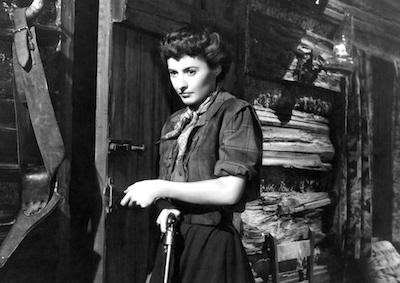 Her husband (they are married on a rain-sodden prairie by an itinerant preacher, and she guards ever after the tattered wedding certificate) gets gold fever and discovers (thanks to his wife) silver. He gets into the pocket of the railroad interests and throughout it is she, not he, who provides the steel. In fact Hoyt seems too naïve and unsteady to be the founder of a great city. He stupidly shoots Steely in a saloon when the man comes with news of the (supposed) death of his wife. And, as a reviewer at the time said, “If the ‘great man’ is only an ambitious schemer, for what are we to give credit to his lady?” Luckily, the great man in question is Joel, so we believe it. 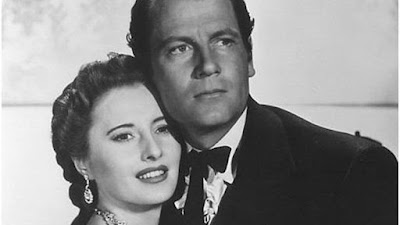 With the great man

There’s a slightly heavy-handed attempt at comedy – one might even be tempted to say low comedy – and often the story spills over into melodrama. But at the core is a towering performance by Stanwyck as a woman who sacrificed herself to her husband and lost everything, including her baby twins, as a result, and lived many years as a lonely widow.

On the whole it’s a rather soapy saga of Manifest Destiny more than a true Western and reminds us a bit in that way of Cimarron – not one of my favorite pictures in either of its iterations. It’s certainly not Wellman’s finest hour. The slushiness is enhanced by Victor Young’s very romantic score, largely ripped off from Brahms’s Symphony No. 3. 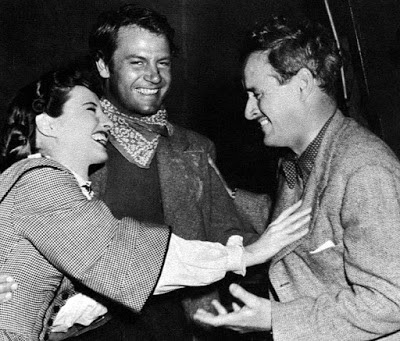 Stanwyck, McCrea and Wellman seem to be enjoying themselves

The picture was shot just before Pearl Harbor but released in April ’42. The New York Times critic (“TS”) said, “Although now is as good a time as any to draw strength from our pioneer past, the backward glance of The Great Man’s Lady, now at the Paramount, doesn’t reveal much cause for pride. As a sentimental journey of a 100-year-old matriarch back to the time when the West was young and strong men needed courageous wives, it is less the record of the boisterous and often reckless energies that built a new empire than the story of the rather grubby ambition of two persons who had a vision of ‘a mountain of gold with a white light in the sky.’”

Variety called it “a tedious story of the pioneering west” and said that the treatment tended “to slow the picture to a walk.” So the reviews were not very flattering. Myself, I don’t think it’s as bad as all that, though the writing is pretty clunky (five writers are credited) and without Stanwyck and McCrea it would have been a real dud.