Well, we’ve had Gun Battle, Gun Belt, Gun Duel, Gun Fight, Gun Fury and Gun Street, to name but a very few, so why not Gun Glory? Though I’m not sure how glorious the firearm was in this case.

It was a classic big-studio late-50s Western, in the very heyday of the genre, bright in Metrocolor and in CinemaScope, shot in attractive Bronson Canyon and other California locations. The DP was Harold J Marzorati (not a Western specialist: he only did The Marauders and The Hired Gun apart from this). One good thing, there are very few of those studio close ups of stars with fake-looking back projection, which MGM was normally so fond of. 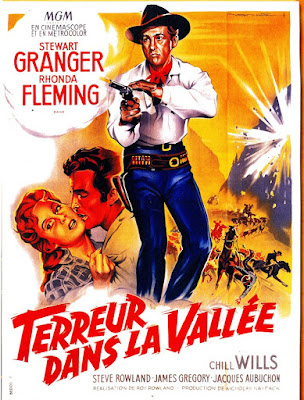 The picture was directed by Roy Rowland, a script clerk at MGM who married studio boss Louis B Mayer’s niece and, coincidentally or not, got promoted to directing. Before Gun Glory, he did The Outriders, an OK Joel McCrea oater, then the disappointing Bugles in the Afternoon (a mediocre film from a great novel), the ho-hum Stanwyck/McMurray vehicle The Moonlighter and the singularly unfunny Many Rivers to Cross. It wasn’t that glorious a Western career. This was his last picture for MGM. He would end up doing cheap spaghetti westerns in Europe. 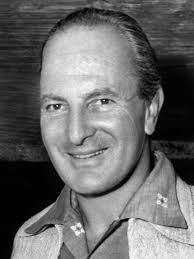 I actually think, though, that Gun Glory was Rowland’s best Western. It starred Stewart Granger. Granger was a posh Brit, born 1913 in upmarket Kensington, London (died in upmarket Santa Monica 1993) who made quite a career in Hollywood (of course he wasn’t the only one), deciding to change his true name of James Stewart – that had already been taken. He signed with MGM in 1950 and tended to specialize in swashbucklers such as The Prisoner of Zenda and Scaramouche. But he had a go at oaters too and was surprisingly convincing in them. Starting in one of those Canadian Westerns, The Wild North in 1952, he was then impressive with Robert Taylor in The Last Hunt, and after Gun Glory he co-starred with John Wayne in North to Alaska. He made three of those Karl May ‘Old Surehand’ oaters in Yugoslavia in the mid-60s before becoming Col. Alan Mackenzie on The Virginian. I think he was pretty good in our noble genre. He could do tall, tough and taciturn.

Gun Glory is an 1886 Wyoming story and it starts in that absolutely classic (I do not say clichéd) way of a gunman riding into town and getting fearful and awed looks from townsfolk, who nudge each other. A small boy points a wooden pistol at the stranger and the gunman plays along, raising his hands (being nice to a child or animal in the first reel always established goody credentials) and the lad’s pal says he’s crazy. “Don’t you know who that is? It’s Tom Early!” (Gasps all round).

So here we have a feared gunslinger riding in.

It soon becomes clear that Early is heading home, his ranch, and has been away (gunslinging, presumably) for some time. There he meets his son, Tom Jr, mid-20s maybe, who is pretty bolshie (of course angry young men were all the thing then) and clearly blames his dad for the death of his mother, Early’s wife, who lies in the family graveyard. Tom Jr is played by Steve Rowland, and if you think it’s rather a coincidence that the young actor has the same surname as the director, you’d be wrong. Steve was Roy’s son. He’d had a bit part in The Moonlighter and done some TV shows (he was a young Clanton in some episodes of Wyatt Earp directed by his dad) but this was really his first major part in a Western. 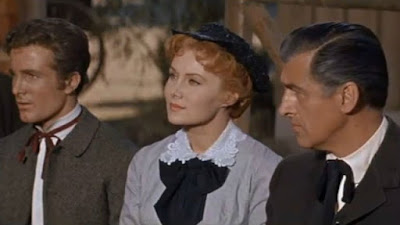 Rowland Jr as Granger’s son and his dad both fancy Rhonda, as indeed, who wouldn’t?

The gorgeous Rhonda Fleming is Jo, the woman who falls for Early. I’ve always been a Rhonda fan, The Queen of Technicolor as she was called. The same year she was the belle Laura in Gunfight at the OK Corral. You may remember her too in Abilene Town or The Last Outpost, and she was the titular Redhead and the Cowboy (though it was in black & white so you had to take the red part on trust). Pony Express, Tennessee’s Partner, there were quite a few others. The son falls for her too, which is a bit awkward, but she soon puts him in his place and concentrates on his dad. 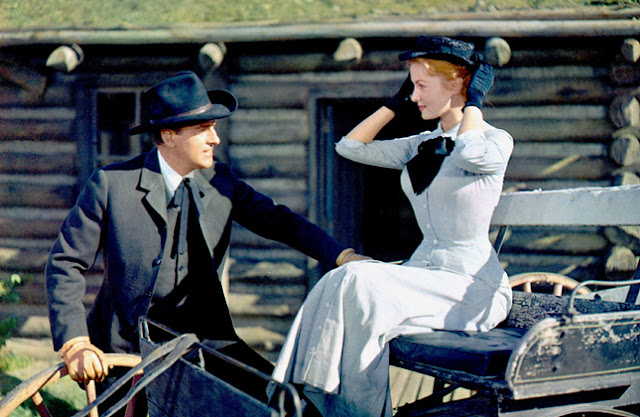 La Belle Rhonda goes off to church with her gunslinger intended

Enter the chief bad guy. It’s an 1880s Wyoming tale so he is a ruthless cattleman. James Gregory is Grimsell, determined to run his huge herd right through the farming land of the community. Early briskly dispatches Grimsell’s baddy blond gun hand (Rayford Barnes) and warns Grimsell that he better steer his cattle well clear of the Early place, or else. This sets up the conflict nicely. You will recognize Gregory right away. This was actually his first Western but you may also think of him in A Distant Trumpet, and of course as the bad-guy gunsmith in The Sons of Katie Elder. He did a whole wagonload of TV Western shows at one time or another too.

The townsfolk are led by Rev. Chill Wills, who is orchestrating the construction of a new church. It’s a good part and Chill makes the most of it (as he was wont to do). Of course he leads the singing with gusto. He may be a man of the cloth but he is quite tolerant and also happy to be one of those preachers with a bible in one hand and a gun in the other. 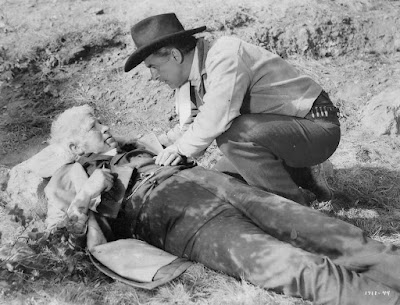 Chill has a death scene (and does rather milk it)

There’s a nice exchange when Early is warned, “Live by the gun, you die by it” and the gunman ponders a moment before replying, “Depends what kind of a shot you are.” There is something quite Shane-ish about Early, I reckon. Not only the Wyoming context but the gunman coming out of nowhere and standing up to a ruthless cattle baron on behalf of the locals.

Some of the writing is pretty good. The screenplay was by William Ludwig, not a Westernista (this and Oklahoma!, which you can hardly class as a Western, being his only forays in the genre) but the story was by class act Philip Yordan – The Bravados, Johnny Guitar, Day of the Outlaw, Broken Lance and The Man from Laramie being among his credits. 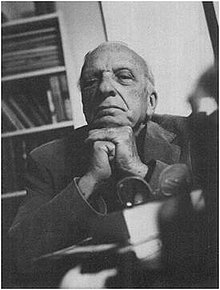 There’s a dance and a stunt double stands in for Granger in cutting out a steer. The action climaxes with a rockfall and a stampede and, naturally, a shoot-out.

It’s all quite good, I reckon. OK, I agree, it’s hardly great art but if you are looking for a straight late-50s Western (and if you aren’t why are you reading this blog?) you could do a lot worse. 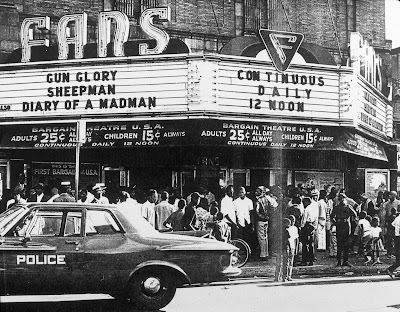 I see it was on with The Sheepman
PrevPreviousMan in the Saddle (novel by Ernest Haycox, 1938 and Columbia movie, 1951)
NextDesert Flight, a Budd Boetticher-directed episode of Zane Grey TheatreNext