Guns of the Revolution, aka Rain for a Dusty Summer, 1971

Guns of the Revolution, also known as Rain for a Dusty Summer, the title of a soppy and inappropriate ballad crooned during the picture, is another Mexican revolution movie. It has a portly Ernest Borgnine wheeled on for a few scenes as ‘El General’, the nameless president of Mexico who is conducting an anti-clerical campaign. In these pictures (see Cristeros or The Fugitive) these anti-church rulers are always evil and/or mad. There’s never any sense that they may have had some right on their side. The Mexican people are piously religious, and good, and right, and that suited the mostly American audiences just fine. The very idea of trying to establish a secular state, how shocking.
.
. 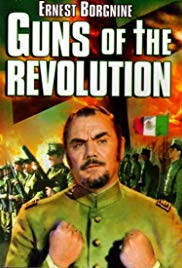 Not that I am advocating shooting priests, or anyone else. But we could do with a slightly more nuanced discussion of the issue sometimes.

We are given the date of 1917 in the movie, though President Plutarco Eliás Calles, the real ruler who tried to break the stranglehold of the church, was in fact in office 1924 to ’28. Venustiano Carranza Garza was ruler in 1917 and he was a shrewd politician rather than a military man and from a rich, northern landowning family, and nothing like ‘El General’ in the movie. Ernest isn’t much like President Calles either but we’ll let all that pass.

The movie came out in 1971, two years after Borgnine had been so powerful for Sam Peckinpah in The Wild Bunch. His Westerns definitely went downhill from there, as he did any old junk TV movie or spaghetti that came along, stuff like The Trail to Hope Rose or Aces ‘n’ Eights, in which he played cuddly and lovable old-timer grandpas and such. He hams it up as El General. Though Ernie put in some strong performances in his career, you always thought the inner ham was on the point of coming out. Then it did.

It was a Spanish production, shot in Spain with a largely Spanish cast, many of whom are dubbed for the English version. It was directed by an American, however, Arthur Lubin, director of many of those Abbott and Costello pictures, who had also helmed The First Traveling Saleslady and many TV Western shows, especially Maverick episodes. He tended to specialize in comedies, which Guns of the Revolution isn’t.

The hero is a jolly young priest, Miguel Pro (Humberto Almazán, who actually is a priest) who, when all other padres are exiled or dead, manages to evade capture and minister to the needy Mexicans, secretly baptizing, marrying and such. His brother Humberto (Sancho Gracia) wants Miguel to fight but that isn’t his gig. Miguel prefers to go around being priestly. 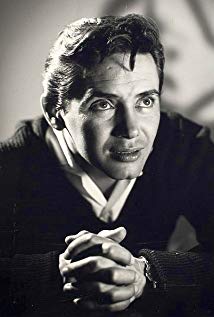 El General has a sinister officer, Colonel Marinos (Aldo Sambrell) in charge of his secret police, rooting out the priests and closing down churches, and he is doing his utmost to find and trap Miguel, which he finally does.

None of it is very exciting though. It is one of those films “based on fact”. José Ramón Miguel Agustín Pro Juárez, SJ, or the Blessed Miguel Pro (born January 13, 1891 – executed November 23, 1927) was indeed a Mexican Jesuit Catholic priest executed under the presidency of Plutarco Elías Calles on charges of bombing and attempted assassination of former Mexican President Álvaro Obregón. 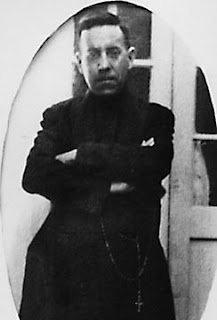 The real Miguel Pro
Pro’s arrest, lack of trial, and the support he got were a major feature of the so-called Cristero War. He was beatified in Rome on September 25, 1988, by Pope John Paul II as a Catholic martyr, killed in odium fidei.

In the movie an attempt is made to assassinate El General. In fact, it was former president Alvaro Obregon who was the target, not the then sitting president. 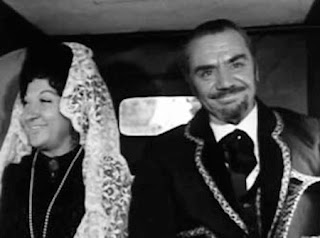 El General on his way to the bullfight with his wife, about to be subject to an assassination attempt

There was no evidence at all that Fr. Miguel was involved but that didn’t stop his death by firing squad, of which there are photographs. The actor in the movie adopts the crucifixion-like pose just before the fatal shots are fired, as seems to have been the case.

The modern print isn’t very good, and the sound is ropey too (I saw it on TV). The movie is no worse than many other early-70s made-in-Spain pictures, but it isn’t any better either.