I’ve been reviewing a number of mediocre-to-bad Westerns lately but here at last is an oater you can really enjoy, an almost classic black & whiter of an earlier time. Oklahoma Territory is a straight-down-the-trail horse opera of the old style, and all the better for that. It was a Robert E Kent production and was directed by Edward L Cahn, another in quite a series of late-50s, early 60s Kent/Cahn collaborations (e.g. Noose for a Gunman, Five Guns to Tombstone, Gun Fight, Frontier Uprising). 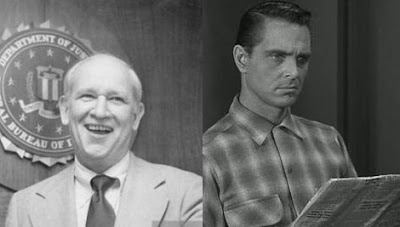 It’s interesting because it is one of the few (it may be the only) big-screen picture to feature Temple Houston – although it is said that novelist Edna Ferber based her character of Yancy
Cravat in Cimarron on Houston, so you could say that Richard Dix in 1931 and Glenn Ford in 1960 also played him. In the mid-1960s NBC’s TV series Temple Houston featured him as a sort of Western Perry Mason, more detective than lawyer, with Jeffrey Hunter in the title role. This series is, sadly, not up on YouTube and not available on DVD, and I don’t recall it from the day (where was I?).

Temple, son of Sam, 1860 to 1905, had a colorful career, leaving home at thirteen to join a cattle drive and then working on a Mississippi riverboat. In Texas he studied law and philosophy and was admitted to the bar, the youngest attorney in Texas when he opened his practice. In 1882, Houston was appointed as the district attorney of the 35th Judicial District of Texas, which then covered a large part of the Texas Panhandle, based in Mobeetie, and in 1884 he was elected to the Texas Senate. 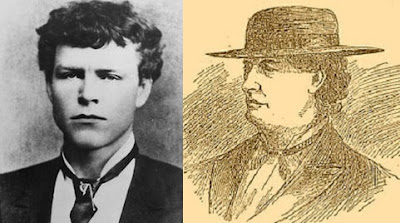 Houston carried a Colt’s revolver, which he named “Old Betsy”. Some called him “the best shot in the West.” He wore buckskins and a sombrero with a wide brim and a silver eagle. Like his father he was more than six feet tall. He had gray eyes. His auburn hair was usually shoulder-length. His knowledge of the Bible and classical literature was impressive. He spoke French and Spanish, as well as several Indian languages. The historian William T. Hagan described Houston as “a flamboyant figure in his black frock coat and shoulder-length auburn hair topped off with a white Stetson. He liked to lace his arguments with literary allusions and could enthrall a courtroom or legislative chamber.” He certainly commanded the attention of an audience.

Houston participated in the Oklahoma Territory land rush of 1893, and in ‘94 he moved his family to the cattle town of Woodward, OT. He was legal counsel of the Atchison, Topeka and Santa Fe Railway; its Woodward depot became one of the most important points in the territory for cattle shipping to the East. Houston became widely known and popular for his courtroom dramatics. He himself was charged with murder in the shooting of a brother of the outlaw Al Jennings, after an argument in the Cabinet Saloon, but was acquitted. In 1899, he delivered his “Soiled Dove Plea” in a makeshift courtroom in Woodward’s opera house. The argument on behalf of Minnie Stacey, a prostitute who worked at the Dew Drop Inn, became famous for winning her acquittal after ten minutes’ consideration by the jury.

Houston agreed to be a candidate in Oklahoma’s first gubernatorial election but died of a cerebral hemorrhage two years before statehood.

In Oklahoma Territory Houston is played by Bill Williams. Bill was probably best known for being Kit Carson on TV in the early 50s but he was no stranger to feature-film oaters too, appearing in twenty-two, and himself led in five. He sometimes played the bad guy but was unusual as a goody in that he was blond. 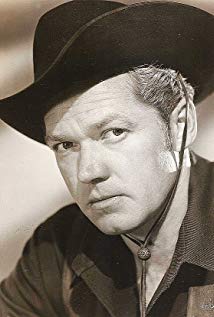 Bill’s Houston is certainly not a railroad man, as in real life. He is more of a Two-Gun Tex lawman than a lawyer, and he is happy, in the finale, to hijack Hanging Judge Isaac Parker’s court and take over, with a revolver in each hand. Great stuff. 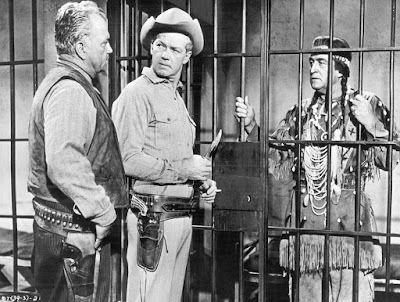 Marshal Sande, DA Williams and Chief Ted (who has to spend 95% of the movie behind bars)

Judge Parker is here played by Thomas Browne Henry, the army officer probably most responsible for helping Earth drive off hordes of invading outer-space aliens but also alumnus of very many Western TV shows and big-screen outings. Judge Parker was a popular character in Westerns, and we think especially of Charles Portis’s novel True Grit and its two film versions, and John McIntire’s part in Rooster Cogburn. The judge also appeared in The Fiend who Walked the West (Edward Andrews). Hang ’em High’s “Judge Fenton” (Pat Hingle) was clearly a Parker, and there was a highly amusing (and improbable) gunfighter-Judge Parker in the shape of Dale Robertson in The Last Ride of the Dalton Gang, when he has a final main street showdown with evil Detective Jack Palance as they face off and draw! 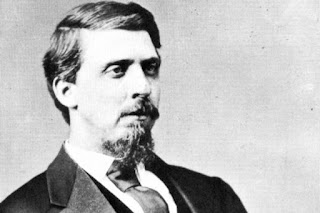 But back to Oklahoma Territory. We open with Temple ridin’ along and hearing gunfire in the Oklahoma rocks (which look very like the Iverson Ranch in California but we don’t want to be picky). It turns out to be his old pal Chief Buffalo Horn of the Cherokee, his son Running Cloud and another brave, Sparrow Hawk, who are being shot at by four white men who claim to be deputies with a warrant for Buffalo Horn’s arrest. Temple is all ready to side with his Indian pals but his respect for the law is such that he must uphold the warrant. You see he’s the DA (the movie has made him a DA in Oklahoma rather than the Texas Panhandle). 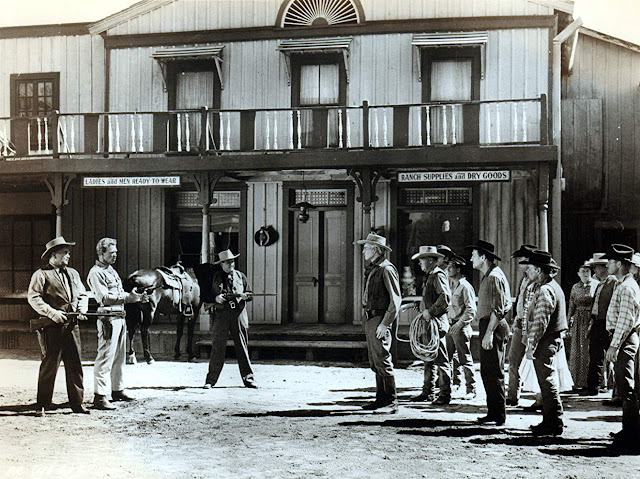 Buffalo Horn is played by our old pal Ted de Corsia, always a pleasure to see and often an Indian. I liked him best as Shanghai Pierce in Gunfight at the OK Corral. His militant and fiery son Running Cloud is X Brands, the Tonto-ish Pahoo in Yancy Derringer but also a Western regular. Sparrow Hawk is very soon shot so doesn’t get much of a part but that was Charles Soldani, an actual Oklahoman. 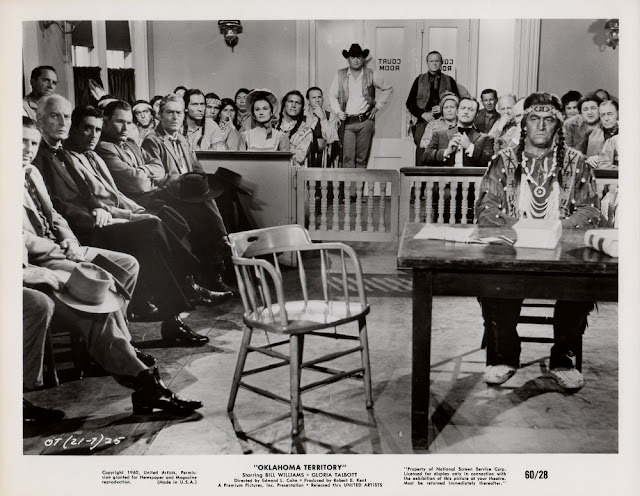 Of course Buffalo Horn is innocent. It’s all a put up job. There’s a crooked railroad man in town (I told you it was a proper Western), Bigelow, played by Grant Richards, another regular on Western TV shows but this and a 1936 Hopalong Cassidy oater were his only big-screen Westerns. The real culprit was Bigelow’s unshaven henchman Larkin (John Cliff, invariably a crook, in Westerns from 1949 on when he too was in Fighting Man of the Plains). Larkin killed the Indian Commissioner so that the chief would get the blame and war would result, because the treaty says that Oklahoma will only remain Indian Territory for as long as the tribes are at peace. Cunning, huh.

Although the chief is being framed, the trouble is that the case against him is a slam-dunk. He had motive and opportunity, the knife used was his, an eye-witness testifies and his claimed alibi was not upheld. Oops. Even Temple comes to believe that he is guilty and, well, the law’s the law, so he prosecutes, Buffalo Horn is found guilty and Hanging Judge Parker does not hesitate: the chief must hang by the neck until he be dead. Still, Temple does, in a classic scene, stand down a lynch mob with his six-shooters and demonstrate his courage, grit and respect for law ‘n’ order. More great stuff. 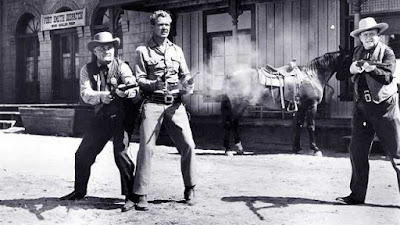 Buffalo Horn’s daughter doesn’t believe for a moment that Daddy is guilty and she is resourcefully trying to get proof. She is Ruth, amour of the DA, and is impersonated by Gloria Talbott, Miss Glendale, California 1947, whom you will doubtless remember from various oaters. 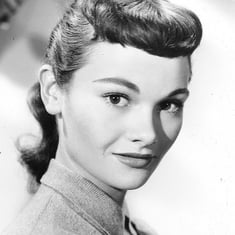 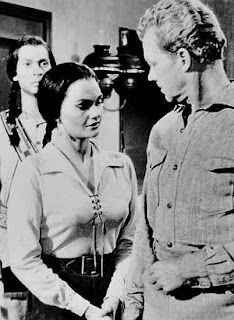 …is a Cherokee (as she was in The Oklahoman too)

There’s also a decent marshal (our old pal Walter Sande), a supportive newspaper editor, Ward Harlan (Walter Baldwin, from Ride, Vaquero!) and, on the other side, a crooked politician (if that’s not tautological) from Wichita, Blackwell (Grandon Rhodes, the general in that epic Earth
vs. the Flying Saucers) who is in cahoots with the slimy Bigelow. Together they plot to make Temple governor. They think (poor saps) that he will be in their pocket.

It’s all rather a complex plot but you can follow it OK. It rattles along and it sure don’t drag. It was written by an old faithful of Kent and Cahn, Orville Hampton – he wrote A Dog’s Best Friend, also with Bill Williams, then Gunfighters of Abilene, Frontier Uprising and The Gambler Wore a Gun. 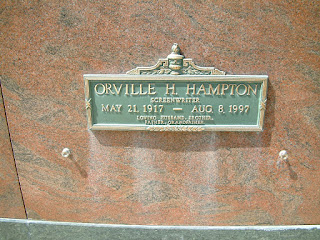 There are jailbreaks, gunfights, a posse, courtroom drama, the works, and all crammed in to 67 action-packed minutes. It’s my kinda Western.

It has almost nothing to do with the historical Temple Houston but since when has monkeying with history stopped us enjoying a good oater? And this one is hugely enjoyable.

PrevPreviousMission to Glory: A True Story (TV movie, 1977)
NextFury at Showdown (UA, 1957)Next

PrevPreviousMission to Glory: A True Story (TV movie, 1977)
NextFury at Showdown (UA, 1957)Next
Jeff Arnold © 2022 – All rights reserved – Designed by BetterCallChris
Scroll Up