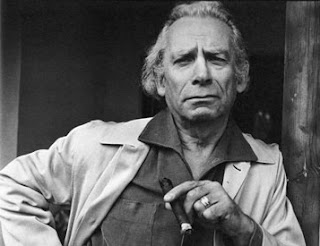 The Deadly Trackers was Samuel Fuller’s last Western. Well, it was and it wasn’t. Fuller (left) wrote a story, Riata, and then worked it up into a screenplay. He sold the project to Warner Brothers and shooting began in Spain, with Fuller directing and featuring Richard Harris in the lead. However, it is said that Warners were so appalled at the first rushes, and, according to eventual co-star Rod Taylor, Harris hated Fuller’s script so much that he walked out on the original production, so the studio pulled it. The whole shebang was recast (Harris was the only survivor) and rewritten, and another director was appointed. Shooting was rescheduled for Durango, Mexico, and the picture had little to do with Fuller in the last resort.

Finally, Fuller may have been relieved because the resulting film was pretty bad. 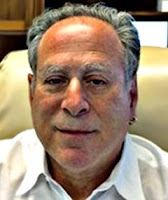 Barry Shear (right), the credited director, helmed a few Alias Smith & Jones episodes but this was his only feature Western. He was probably best known for his blaxploitation flick Across 110th Street. He didn’t have much of a clue about big-screen Westerns.

A basic problem for me is that I think Harris was lousy in Westerns. He was indeed superb as English Bob in Unforgiven, we all know that, but in every other oater he seemed miscast and he overacted (he overacted too as English Bob but somehow got away with it). He did eight Westerns. 37.5% of these were A Man Called Horse and sequels, and jolly bad they were too. I didn’t much care for him in Major Dundee either. In this one, The Deadly Trackers, he plays an Irish sheriff, Sean Kilpatrick, in the border town of Santa Rosa, who detests guns. He won’t even allow his young son a toy one. When a bank robbery takes place, the trained and schooled townsfolk go into action to trap and disarm the robbers but he forbids any shooting. 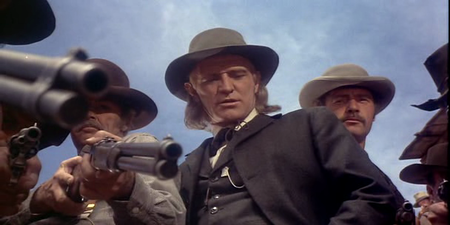 I suppose he does look a bit like English Bob

However, once his wife and son are dead at the hands of the outlaws, he becomes a revenge-crazed killer, going to any lengths to track down and murder the bad guys. The change is too sudden and too complete to be dramatically credible.

The leader of said bad guys and the principal villain, replacing Fuller’s choice of Terence Stamp, was Australian Rod Taylor, in a Confederate uniform coat. Taylor’s “virile, matinée idol looks”, as the IMDb bio says, were famously used in The Birds and The Time Machine, and his voice (though not the virile, matinée idol looks) were used as Pongo in 101 Dalmatians, but we shouldn’t forget that John Ford was an admirer (Taylor was Young Cassidy in 1965) and Mr Taylor could certainly act. He appeared in a lot of Western TV shows, though few Western features, only four. Chuka was about his best. In The Deadly Trackers he is a horribly violent and base criminal, Brand, who will certainly perish in the last reel (so of suspense there is none). 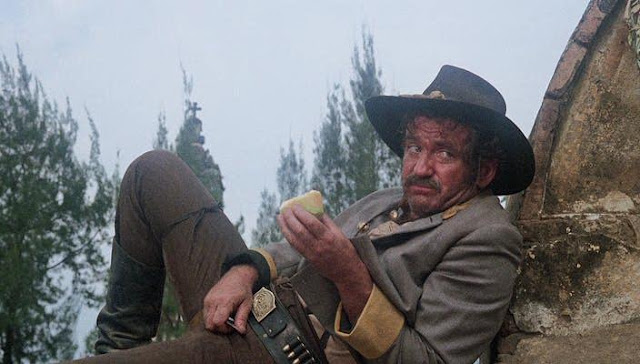 Rod is the bad guy (or anyway the even worse guy)

Brand’s sidekick should really have been Brand because it’s Neville (this and Cahill, US Marshal, also in ’73, were his last Western movies), but he only goes under the nomenclature of Choo-Choo. He is an even baser type, ready to commit any crime, and he has a bit of railroad track instead of a right hand, probably to explain his nickname. It comes in handy for bonking people on the head and such. Another member of Brand’s gang is a dudish African-American named Jacob (Paul Benjamin: apart from this picture the nearest he got to being in a Western was as a barman in Midnight Cowboy), whom Brand refers to often as a “n— son of a b—”. Lastly, there’s an, er, intellectually-challenged fellow (I don’t think you’re supposed to say moron these days) with the soubriquet Schoolboy (heaven knows why), played by William Smith, “Biker, bare-knuckle brawler, cowboy, Bee-Girl fighter, vampire hunter”, says the IMDb bio (I wonder what a Bee-Girl fighter is, but no, please don’t tell me), who knifes a bank customer to death because he wants the man’s hat. Mr Smith was born on a cattle ranch, so that’s quite Western, I suppose. He did a few oaters, including another with Neville Brand. 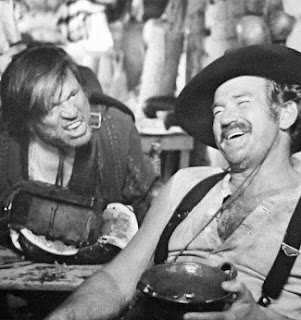 Neville plays a slob with some railroad track for a hand 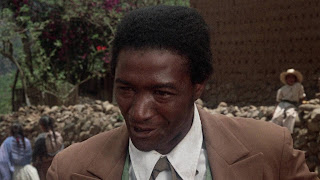 They are not the most endearing of people, these robbers. Though at least Jacob has good grammar.

There’s a Mexican lawman, Gutierrez, to counterbalance the vengeance-crazed American one, a decent fellow, kinda, though not overly competent. He’s played by an Italian, Al Lettieri, not altogether convincingly. Lettieri was a frequent screen hoodlum in gangster flicks but as far as Westerns go he only did this and a dire 1971 Telly Savalas Mexican-revolutionary picture, so is a bit out of place. 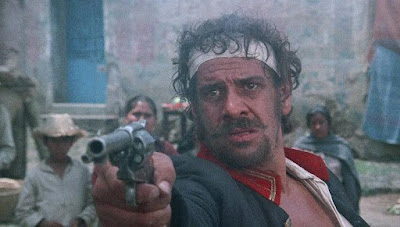 The early-1970s violence is prevalent, and unpleasant, even salacious. Brian Garfield said, “The film is a tawdry, unforgivably brutal, obscenely moronic bloodbath.” I don’t think he liked it.

Perhaps there was some hangover from Fuller after all.

Worse, though, are the one-dimensional characters and weak plot. It’s just the Nth revenge-pursuit drama, and it cannot sustain the 110-minute runtime, so that in the end the film drags. I suppose there’s a sort of those-that-live-by-the-Colt-die-by-the-Colt message but it’s pretty heavy-handed, to say the very least. 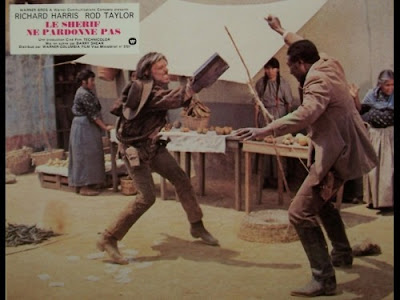 Neville in no danger of underacting

Visually, the picture is quite nice, in good Technicolor with Mexican (and some Corriganville) locations nicely shot by Gabriel Torres, who worked with Harris again on A Man Named Horse.

The score, credited to Fred Steiner, is actually re-used segments from Jerry Fielding’s music for The Wild Bunch. This was an economy measure because Warners were alarmed by the skyrocketing costs of the whole project.

While I don’t think it is quite the “irredeemable trash” that Garfield called it, The Deadly Trackers is certainly not very good, and it never recovers from Harris’s performance either.