1953 was a remarkably good year for the Western movie, and The Last Posse was by no means the worst example.

It did star Broderick Crawford, which a priori was a bit of a handicap. Crawford’s quick-fire Eastern lingo (he was born in Philadelphia, went to school in Massachusetts and worked first as a stevedore in New York) was better suited to crime and cop dramas and such. He was ideal in a Highway Patrol car. His considerable bulk didn’t quite suit our noble genre either. He always looked a bit top-heavy on a horse. But he loved Westerns, and to be fair he did have enough tough-guy cred for them. He appeared in sixteen oaters from 1940 to 1967, leading in five of them. And I think The Last Posse was his very best Western performance. The picture also featured John Derek – it was the second of his five feature Westerns, and in fact this one completes our John Derek season. Not everyone thinks him the greatest of actors but he wasn’t bad in this genre. His part was, though, slightly smaller than the second-billing warranted. Instead, a superb Charles Bickford played the key figure opposing Crawford. He was such a powerful actor, and he was a regular in talkie Westerns from 1929 on. We think especially of his fine performance as Sam Pierce in Duel in the Sun, his Pat Garrett in Four Faces West, his hoodwinked rancher in Branded, his gambler in A Big Hand for the Little Lady and, particularly, his masterly Zeb Rawlins in The Unforgiven. He was never less than excellent. 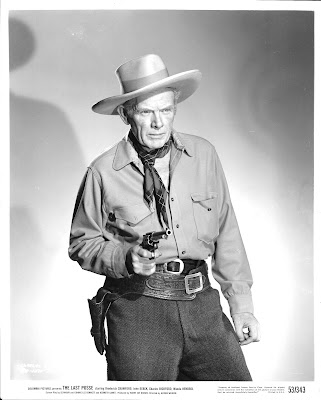 …as the bad guy

Wanda Hendrix was the female lead, no longer Mrs Audie Murphy but still doing Westerns (this was her fifth of seven). And lower down the cast list we have good old overactor Henry Hull, classic old-timer Will Wright, Tom Powers, Skip Homeier, Monte Blue and Franklyn Farnum, among other Western regulars.

So the picture was not let down by its cast, far from it.

One of the best features of the film is the look of it. It was shot in a very fine black & white by Burnett Guffey (2 Oscars and 5 nominations besides), who had been picked for second unit by John Ford as far back as The Iron Horse (1924). He only shot eight Westerns but they included The Conquerors for Wellman, The Violent Men for Maté, Decision at Sundown for Boetticher and They Came to Cordura for Rossen. Seriously classy. Guffey made the most of the splendid Lone Pine and Yuma, AZ locations, and it’s great to see Lone Pine shot so well in monochrome. For once studio boss Harry Cohn threw some budget at it, and the picture has the look of an A-movie. The producer was Harry Joe Brown, who was very fond of location shooting for Westerns, and he especially liked Lone Pine. He produced 24 oaters and was associate producer on more, and we think especially of those splendid Budd Boetticher/Randolph Scott pictures of the late 50s. 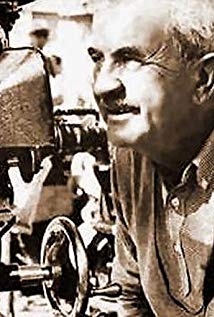 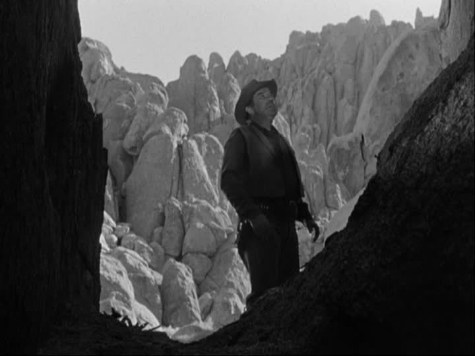 The director was Alfred L Werker, who also went right back to the silent days. He co-directed the 1928 Kit Carson, then directed the talkie Last of the Duanes in 1930. In the mid-50s he helmed, as well as The Last Posse, Westerns such as Devil’s Canyon (also 1953), Three Hours to Kill, At Gunpoint and Rebel in Town (his last oater). So he knew what he was doing. It was written by Kenneth Gamet, who wrote or co-wrote twenty Westerns, including Last of the Comanches with Crawford (also ’53) and no fewer than eight oaters for Randolph Scott (so we can classify him as an expert), using a story by Seymour and Connie Lee Bennett.

The interesting story, which is largely told in flashbacks, concerns ruthless New Mexico cattle baron Sampson Drune (Bickford) who has swindled the Romer family out of their livelihood. In retaliation the Romers (brothers James Bell and Guy Wilkerson and Bell’s son, the eternal Western punk kid Homeier) burgle the cattlemen’s bank in Roswell (Raymond Greenleaf is the banker), take Drune’s hundred thousand dollars and flee. Bullying and arrogant Drune organizes a posse, the alcoholic and mocked Sheriff John Frazier (Crawford) not being in a fit state to lead one. Derek plays Jed Clayton, Drune’s adopted son and right-hand man, who, though loyal, lacks the ruthlessness of his senior. There’s a slight hint of the John Wayne/Montgomery Clift relationship in Red River. He has a (rather perfunctory) relationship with Deborah (Hendrix), who says to him, “I don’t like to tell you what to do, but…” then tells him what to do. But lerve is very much on the sidelines in this picture. Also on the posse are four notable townsmen-oligarchs (Warner Anderson, James Kirkwood, Will Wright and Tom Powers) but they are on the pusillanimous side, like many townsmen in Westerns. Drune will have little to do with them and go his own way. But they will play a key part in the plot later.

As the posse pursues the robbers, various secrets are revealed, one by one. It’s quite suspenseful.

Sheriff Frazier now gets his act together and, ashamed at not leading the posse, rides out to join it. He barely makes it, and when he catches up with Drune’s crew he can hardly stand. Little by little, though, he will assert his authority and take over command. Crawford handles this very well, gradually re-assuming his decency and courage as he overcomes his dreadful hangover and the desert terrain, and regains authority. Back in town, and aiding the flashback-narration, is drummer Henry Hull, who tells the story to another salesman in town. In this picture Anderson plays the blowhard newspaper editor, usurping Hull’s proprietary role. Henry Hull is a drummer who befriends the alcoholic sheriff

There’s an action climax in which various characters shoot other characters and some characters survive and others don’t (yet my lips are sealed).

There are definite echoes of Columbia’s All The King’s Men (1949), Crawford’s Oscar-winning fictionalized portrayal of Huey Long directed by Robert Rossen. Derek is an adopted son there too, there is detached narration (that time by John Ireland), Raymond Greenleaf is the judge, the presence of Will Wright, and so on. Burnett Guffey was the DP. But I think these are just allusions or coincidences, or a normal use of studio contract personnel, not in any way an attempt at remake or re-statement.

It’s dark and somber, and only 73 minutes, yet really well done. The harsh terrain and the toughness of the protagonists reminded me a bit of those Westerns of Anthony Mann. Recommended. Worth a look
PrevPreviousBlack Spurs (Paramount, 1965)
NextAl Jennings of Oklahoma (Columbia, 1951)Next