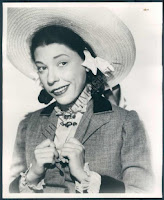 Judy Canova (1913 to 1983), pictured left, was an exponent of so-called cornpone humor. Her shtick was to make herself as ugly as possible, by twisting her face into grimaces, wearing pigtails, accentuating her already huge posterior and so on, doing a country-bumpkin act that doubtless had them rolling the aisles. She was born in Florida but made her name as one of the Georgia Crackers, singing raucously, yodeling and playing the guitar, and she was known, ironically, as The Ozark Nightingale, also winning the soubriquet the Queen of Corn. On the screen she was probably best known for Louisiana Hayride in 1944 but she made three Westerns, Singin’ in the Corn, Oklahoma Annie and Untamed Heiress. Republic invented a new nickname for her on the screen, the Queen of the Cowgirls.

Viewed today, Oklahoma Annie is heavy-handed comedy, largely base on slapstick, and not in the best possible taste, though it probably still has its admirers. But it was perhaps more appreciated in 1952. Brian Garfield dismissed it in two words: awful clunker. Still, a Western is a Western so when I saw it on the TV listings (on an Irish country music channel) I dutifully watched it.

I’m not quite sure why it’s called Oklahoma Annie because Oklahoma Annie does not appear. She’s dead. She was, we are told, the grandmother of Judy Canova (Judy Canova), the storekeeper in a Western town, and Judy has a (rather forbidding) photograph of grandma in her general store. The old girl was a “lady sheriff” in Oklahoma back in the day. 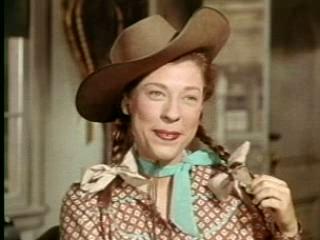 La Canova at her most glam

Judy opens with a song, a model train set she is selling to a small boy providing the excuse for the railroad lyrics and whistle sound-effects she provides. There will be two more songs unfortunately but I suppose it was inevitable. While she is playing choo-choos some bad guys rob the bank. Judy wants to pursue them but County Supervisor Frank Ferguson dissuades her. Usually in these movies you have to guess who the mastermind of the bad guys is as the reels unwind but in this one it’s blindingly obvious from the get-go that the robbers are in the pay of Frank, so no spoiler here.

There are two comic old-timers (Houseley Stevenson and Emmett Lynn) who lose all Judy’s money at a crooked gambling joint run by thug Grant Withers. Fuzzy Knight in a brief appearance is in on the scam. Roy Barcroft is the chief henchman/robber and Denver Pyle gets a bit-part. Maxine Gates, 250 pounds, sings in the saloon (best to avert your eyes and shove your fingers in your ears). 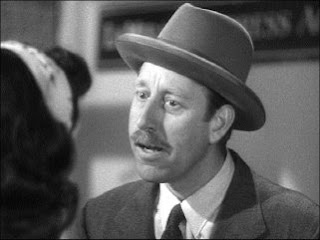 Frank is the crooked town boss

Now a new sheriff arrives in town, 30 minutes in, and it’s handsome John Russell, who, to Frank Ferguson’s disappointment, is honest. Judy falls for the lawman big time, though unsurprisingly he doesn’t seem to reciprocate in the lovey-dovey dept. He has a flash police car (it’s one of those Westerns we were so used to, with Roy Rogers and Gene Autry and so on, which is set in that weird time-warp world of cars and planes but populated by horse-ridin’ cowboys packin’ pistols on their hips). In a chase, though, the automobile is found wanting against the fleeing fellow on a horse, and Russell and his new deputy (Judy) swerve into a stream. This is another Western trope, when the motor car (symbol of the new world and city slickers) is proved to be inadequate compared with the other kind of horsepower (you will certainly be able to think of Westerns where this happens). 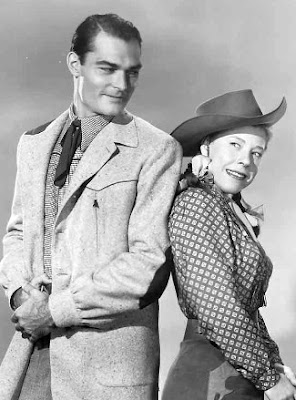 Russell battles gamely with his lines, feigning interest in what Judy says. Full marks for effort. He did the occasional comedy Western, though he is always the straight man/foil to the comic.

The climax involves Judy mobilizing the ladies of the town, who set off in fire trucks to wreck the casino and beat up the bad guys. Frank Ferguson is unmasked, Russell becomes the new supervisor and Judy is appointed sheriff to succeed him, thus assuming the mantle of Grandma Oklahoma Annie. The End (thank goodness). 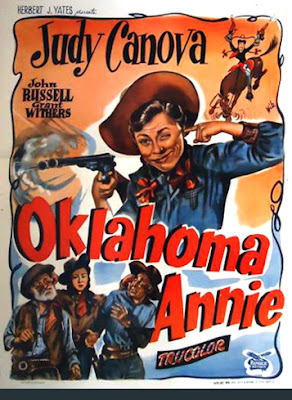 I shan’t be reviewing her other two Westerns
PrevPreviousThe Westerns of Richard Widmark
NextReturn of the Frontiersman (Warner Bros, 1950)Next

PrevPreviousThe Westerns of Richard Widmark
NextReturn of the Frontiersman (Warner Bros, 1950)Next
Jeff Arnold © 2022 – All rights reserved – Designed by BetterCallChris
Scroll Up