.
Winterhawk was a mid-70s pro-Indian picture which got a small-scale independent theatrical release but did most of its sales on VHS. It’s overlong and over-earnest but it does have some saving graces, notably the National Geographic-style photography of Montana winter locations and the cast of grizzled Western old-timers.

It begins with an onscreen intro text which verges on the mendacious and is certainly cloyingly gushing in its hyperbole:

In the entire history of mankind [sic] there has been no race of men [sic] who have [sic] lived with more passion, poetry and nobility than the American Indian of the 19th Century. Never have there been braver knights, more reckless horsemanship, such tragic nobility…
Oh, really? How do you know that?

Once this idiocy is past, though, we can get down to the story. It’s narrated by a white woman who, in 1840, is abducted by a Blackfoot chief, the Winterhawk of the title, and then falls for her captor. She has a voiceover as cloying and woo-woo as the intro text, which becomes indigestible as the picture wears (inexorably) on.

At one hour 38 minutes, the film drags. At one point the narrator, describing her journey, says, “I wondered when, when would it all end” and she nailed it there.

It was produced, directed and written by Charles B Pierce, so there isn’t anyone else much to blame. The IMDb bio tells us that “Charles Bryant Pierce was an independent filmmaker from Arkansas whose movies have become cult classics.” OK. He was the writer for the fourth in the
Dirty Harry series, Sudden Impact, and author of the famous “make my day” line. Westernwise, he made something of a specialty of faux-romantic pictures about the American Indian, of which Winterhawk was his last, phew. 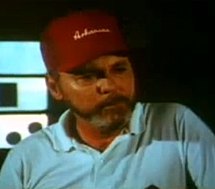 However, he did manage to attract a strong cast of Western character actors, directing, among others, Jack Elam, LQ Jones, Ben Johnson, Woody Strode, Elisha Cook and Denver Pyle. Winterhawk, the chief, is played by Michael Dante, and he is pursued by mountain men Leif Erickson, Pyle and Strode, along with missionary Cook. LQ is the bad guy and Arthur Hunnicutt is a fur trader. It’s a fine list of old-timers for ’75.

Woody and Denver are mountain men

It was filmed in Technicolor and Techniscope and is quite impressive visually. There are many shots of wildlife (especially hawks, of course) though the atmosphere is not improved by some pretty dire music, including Hollywood angels with an ‘Indian’ tone (an odd mixture) and a cheesy ballad, Winterhawk, to accompany a slo-mo horse chase in the snow. 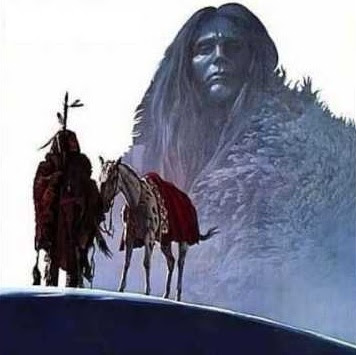 Noble Indian and all that

The kidnapped woman who gets a nineteenth-century Montana version of Stockholm syndrome, Clayanna, is played by Dawn Wells, a former Miss Nevada who was Mary Ann Summers in both Gilligan’s Island and Baywatch. This was her only Western feature. She seems to have snatched up a generous supply of eye-liner before being captured, but you can’t face the wilderness without eye-liner. She is accompanied by her young brother Cotton, also a prisoner, played by the young son of the director, Chuck Pierce Jr, who also warms to his abductor. 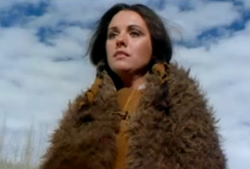 One by one the grizzled mountain men get whittled down until there’s an Erickson/Dante duel in the snow with lances. Unfortunately one of the thrown lances is misdirected and ends up sticking out of the little boy. Oops.

In all honesty I would struggle to recommend this movie, despite the cast.