.
.
The Last Musketeer was the second of Republic’s series of oaters with Rex Allen and Slim Pickens, released the month after Colorado Sundown. Of course the title had nothing whatever to do with either plot or characters of any musketeers but that was par for the course. Westerns were especially fond of Last titles: there was a Last Hunt, Last Frontier, Last Command, Last Challenge, Last Outlaw, and so on and so on. I think the popularity of last came from the nostalgic notion inherent in the genre, the ‘end of the West’ idea that those olden days of frontier freedom were dying and ‘civilization’ was on the way – unfortunately.
.
. 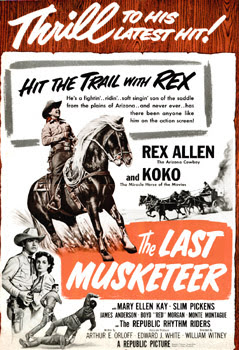 The Last Musketeer is on one level just another one-hour black & white second feature Western, with  comic sidekick, flash horse, glam gal, and villainous bad guy with henchmen. There were hundreds of these pictures. But this one was done with zip and energy. Directed by highly experienced William Witney, it rattled along just fine.

It’s a classic ‘rich bad guy wants the whole valley’ plot. The villain in question is James Anderson, reliable Mr Nasty in any number of big-screen and TV Westerns. It was his face: he just looked like a baddy. 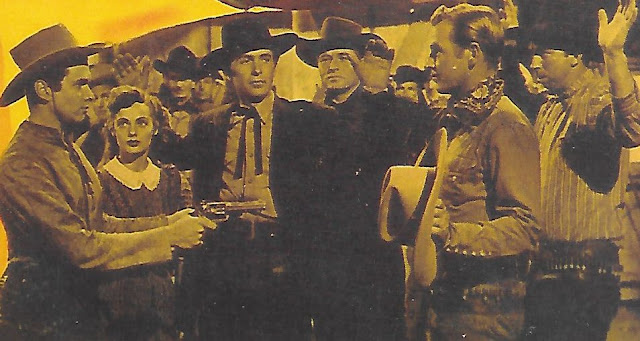 This bad guy wants that valley so that he can build a dam and flood it. It’s a water Western, one of those in which the cattle are dying of thirst but the ruthless and greedy owner of the only water won’t let the ranchers have any. Hills were positive newcomers by comparison to this plot. But it’s familiar and comfortable to Western-lovers; we know where we are with it. And we know that the wicked water-hoarder will get his come-uppance in the last reel.

Rex is a cattle-buyer who meets Slim for the first time (which is odd because they had met just the month before in Colorado in the previous movie). Slim is trying to solve the water shortage with a divining rod, and that gives him plenty of scope for comic antics and pratfalls. The two team up to thwart the villainous Russ Tasker (Anderson). There’s a statue to Tasker père, Byron Tasker, in the town square, and Daddy seems to have been a good guy, but Tasker Jr is far from a chip off the old block, as his foreman Barney realizes. Barney is played by Boyd ‘Red’ Morgan, so that’s good. He’s not credited but he certainly did the stunts too. There’s an especially good one in which ‘Rex’ mounts up by using the saddles of a row of tethered horses as stepping stones. Pappy Byron died in 1905, a plaque on the statue’s base says, so it’s quite a modern Western, though there are no automobiles and everyone rides around with six-shooters on their hips and wearing Stetsons. It’s the mythical 1870s/1880s like so many of these stories. 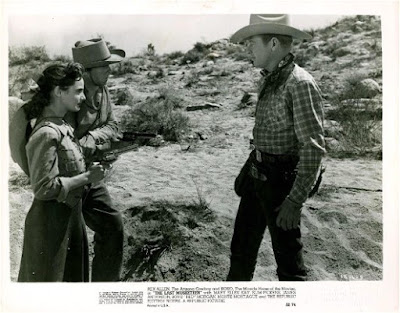 The gal gets the drop on Rex to save her boyfriend

Naturally there is a sprinkling of songs. They used to make me groan when I was a boy in the audience of these movies (in fact the kids would sometimes boo) but I rather enjoy them now. I suppose they were more aimed at the parents. Rex had a nice voice and his co-star, leading lady Mary Ellen Kay, didn’t do badly either. They have the Republic Rhythm Riders to back them up with close harmonies, though it’s not quite so melodious when Slim joins in (his ‘singing’ closely resembles the braying of a mule). We get Don’t Get me Wrong, I Love the West, and a snappy tailored version of Hear the Train Blow, among others.

There’s a hot-headed young rancher’s son, Johnny (Michael Hall, who only did two Westerns) but Rex manages to keep him in check and wedding bells are heard in the last scene as he marries his sweetheart, Sue (Kay). He’s lucky though because at one point he biffed Rex on the head and stole Koko. That’s a shootin’ matter, pardner.

Johnny is a firebrand

Rex gets arrested for letting Johnny escape and Slim tries to get him out of jail by baking the classic well-filled cake (the frosting of which inevitably ends up on his face). There’s dynamite and there are chases and gunfights in the rocks. The picture was shot up at Lone Pine and the Vasquez Rocks, and the locales will be immediately familiar to fans. 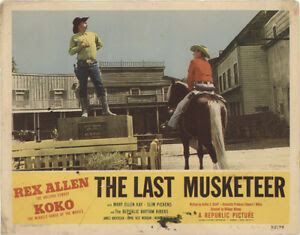 Slim decides that if they need a new statue, he could pose for one

There’s a dog again, this time the handsome General, a collie, I think, who, Lassie-like, is athletic and intelligent. He belongs to Johnny but Rex rides off with him in the last scene.

A very poetic justice is meted out to the villain at the end: he is crushed to death beneath the falling statue of his poppa. Serves him right, the skunk. 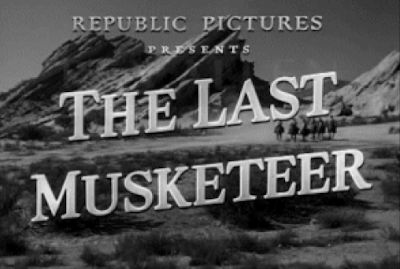