In the late 1950s director RG Springsteen, known as Bud, who had spent the late 40s and early 50s churning out formulaic second-feature Westerns for Republic starring the likes of Allan Lane, Bill Elliott and Monte Hale, started to move a little up-market. He directed George Montgomery in Allied Artists’ King of the Wild Stallions in 1959, then a couple of Audie Murphy pictures for Universal, Showdown and Bullet for a Badman (the latter one of the better Audie oaters) in the early 60s. Of course by then it was pretty much TV work – he helmed episodes of fifteen different Western TV shows, especially Tales of Wells Fargo.
.
. 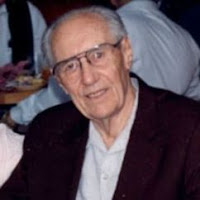 One of RG’s better pictures
.
.
Cole Younger, Gunfighter of 1958 was quite a ‘big’ picture too. It was shot in Color De Luxe and CinemaScope. Whereas Bud could pretty well have directed all those one-hour Republic oaters on autopilot, with this one he had something he wasn’t too used to – budget. Not a huge budget, but still. And a 78-minute runtime. Allied Artists were aiming higher these days. They’d made some more expensive Westerns such as At Gunpoint with Fred MacMurray, Seven Angry Men with Raymond Massey, and the Jacques Tourneur-directed Wichita with Joel McCrea. (Actually, I think a few scenes in Cole Younger, of cowboys hurrahing the town, came from Wichita).
.
.

To be fair, though, the Springsteen input was necessarily limited, because the picture was a quite a close remake of the same studio’s black & white The Desperado of 1954  (see separate review). That one was helmed by Thomas Carr and starred Wayne Morris (though not as Cole Younger – even if he had been Cole in Warners’ The Younger Brothers in 1949) and Jimmy Lydon as the kid. Both The Desperado and Cole Younger, Gunfighter were scripted by Daniel Mainwaring from a novel by Clifton Adams (who had also provided the source for a Bel Air production of the year before directed by Lesley Selander, Outlaw’s Son). Mainwaring, often credited as Geoffrey Homes, was responsible for quite a few not-bad sagebrush sagas, such as Powder River, The Eagle and the Hawk and Southwest Passage, though also a few ho-hum ones like Bugles in the Afternoon (a disappointing rendering of a fine novel) and the Ronald Reagan clunker The Last Outpost. 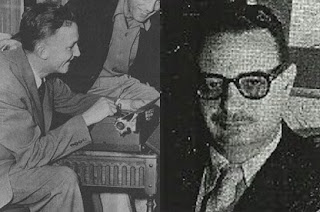 The idea of Cole Younger, Gunfighter is that lightning-fast on-the-run gunslinger Younger meets up by accident with a young gun from Rand City, Texas. I am told that Rand is an unincorporated community in Kaufman County, but I wouldn’t know. The movie is set in the Reconstruction era. In Western movies Reconstruction was an entirely bad thing, with no saving graces at all. In fact the on-screen intro text tells us that

In 1873 the proud citizens of Texas were humiliated and oppressed under the carpet-bagger administration of Governor E.J. Davis and his especially created state police, the corrupt and tyrannical ‘Bluebellies’. Naturally they didn’t take it lying down…

The writers mean, I suppose, the proud white citizens of Texas. The State Police was intensely unpopular among many white Texans, especially former slave-owners, partly because the force had some black recruits, though there are none of those in this movie (perish the thought). It is true that the police were not paragons of virtue. Captain Jack Helm, for instance, who would later be killed by Jim Taylor and John Wesley Hardin, was accused of murdering prisoners; he was fired, and a warrant was issued for his arrest. And James Davidson, the chief of the State Police, embezzled $37,435 and disappeared in 1872. I don’t know if the police were called Bluebellies; I thought that was a generic term of Confederate abuse for all Union soldiers.

In the movie the force is commanded by vicious Capt. Follyard (Ainslie Pryor, not a Western specialist but rather good here; he died two months after the picture’s release). He also owns the saloon, and in Western lore, saloon owners wearing suits are invariably crooks. He is backed up by an equally thuggish Sergeant Price (our old pal, regular bad-guy George Keymas). In fact these policemen are such hoodlums that we are invited to sympathize with young Kit Caswell (James Best, in the sixteenth of his 22 feature Westerns, a career that went from Winchester ’73 in 1950 to Firecreek in 1968) when he and some fellow angry young men string up and shoot an effigy of Governor Davis and then throw dynamite at the State Police HQ and the saloon. This makes the captain and sergeant quite cross, and even more thuggish.

Pryor and Keymas (in other roles)

Now, Kit has a pal, Frank, the sheriff’s son, and they are best friends, I guess, but unfortunately they both pine for the same gal, Lucy (another non-Western specialist, Abby Dalton, whom the IMDb bio describes as “sleek and striking”, admiring her “perky and sexy presence” – are we sure that’s still OK these days?) and so of course there are strains in the bromance between Kit and Frank. Frank is played by Jan Merlin, an alumnus of Grace Church Choir School for Boys yet nevertheless habitually portraying slimy and/or vicious bad guys). He will turn out to be a snake in the grass, even more loathsome than the State Police captain and sergeant, whom he will in fact callously slay, blaming it on Kit, the swine. All to get Kit out of the picture so that he may lay lustful hands on the fair Lucy. 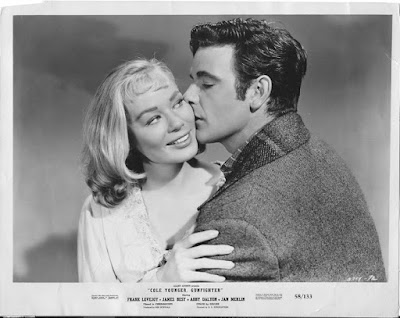 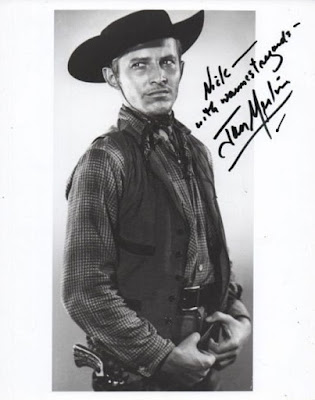 Good news, though: Frank’s dad, the local law, is Frank Ferguson, an old favorite of ours, and not the first time he wore a star (he was even Bat Masterson once). And certainly not the first or last time in a Western movie that a decent lawman would have a wastrel ne’er-do-well son, either.

Much of the first reel has run its course before Cole Younger even appears. When he does, he is not the historical Cole Younger, just a typical Hollywood-Western gunslinger, roamin’ the West and knowing that sooner or later he’ll meet up with someone faster than he is. He gives the usual justification, namely having been forced into a gunfight by a lowdown carpet-bagger when he was, er, younger and being forced to kill or be killed, then being ‘branded’ as a gunman, chased by every punk who wants to prove himself quick on the draw. Curiously, the real Cole Younger, in his 1903 autobiography The Story of Cole Younger, by Himself, did not mention this episode. He must have overlooked it. 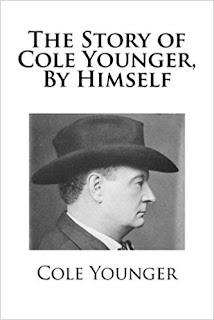 Top billing went to Frank Lovejoy as Cole, in his last ever feature, though in fact the central character in the story is not really Younger at all but James Best’s Kit Caswell (funnily enough Best himself had been Cole Younger, in Kansas Raiders eight years before, but that’s another story). Younger is here the mentor of our hero Kit. I was talking about Lovejoy the other day, when reviewing The Charge at Feather River, but he was not really a regular Westerner, only doing four films (this was his only one as star) and preferring more usually to be a soldier, tough cop or reporter or something. It was a pity he didn’t do more Westerns, though, as he was pretty good in them as hard-bitten man good with a gun. He was the tough bad guy in RKO’s The Americano with Glenn Ford. His Bronx/New Jersey accent comes across as not very Western but never mind. His Cole Younger is essentially a sad man who knows he is doomed. It’s actually an excellent performance. 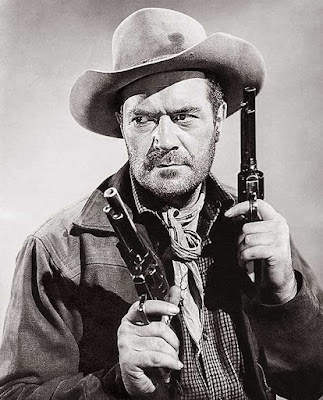 Fine portrait of Frank as Cole

On the run in the Big Bend country, known haunt of outlaws, Kit and Frank cross the trail of Cole Younger. Frank, the skunk, wants to turn Cole in for the reward but Kit is more decent about it. The two erstwhile pals fall out over it and Frank goes off in a high dudgeon, muttering, “I’ll get yer both.” Now Cole and Kit team up, and they meet another gunfighter, one of the Bennett twins, Phil, now afoot having lost his horse. These movies liked twins because they could get just one actor to play two parts. This time it’s our old friend Myron Healey, in the 72nd of his impressive 81 Western features. In the original The Desperado it was Lee Van Cleef. The three join forces but Phil tries to steal Kit’s horse and Kit proves himself lightning fast by shooting Phil down. Later he will meet twin-brother Charlie Bennett (Myron Healey) who is even faster and deadlier than Phil was. Charlie is convinced that it was Cole who killed his brother, because no one else could have been fast enough, whereas we know it was really Kit. Eventually, the truth will out… 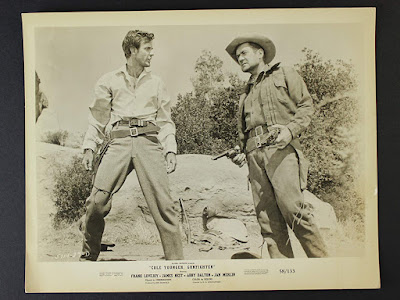 Kit and Cole team up

When finally Kit gets back to Rand, having heard that Govr. Davis has been defeated in the 1873 elections and so he is now safe (he thinks) from the State Police, he finds that the evil captain has killed his dear old dad (John Maxwell, uncredited). So he goes to the man’s saloon to exact revenge. There he has to face both Capt. Follyard and Sgt. Price, both good guns, as well as the barman with a scatter gun (John Mitchum, brother of Robert). It looks hopeless. But at the last mo’ in comes Cole, who has followed Kit, shoots the barman and holds up the other two. Now, however, that he has the drop on the captain, Kit cannot bring himself to shoot him down in cold blood (he’s a Western hero, you see), so he and Cole decide to skedaddle. Unfortunately for them, though, the snide Frank, now an employee of the captain’s in the saloon, sees all this and he murders Follyward and Price (no great loss but still) and puts the blame on Kit. What a skunk!

So you see there’s a fair bit of plot and not a little skullduggery in this one. And it isn’t over yet. Cole and Kit join a cattle drive up to Abilene. That was standard procedure for Texas gunmen on the run. Both Bill Longley and John Wesley Hardin did it, at different times. The trail boss blabs to the Abilene marshal (Douglas Spencer) and so Kit finds himself returned to Rand City in cuffs. I won’t go into all the ins and outs of the plot, for there are quite a few, and it doesn’t help the reader much, especially if s/he is going to watch the movie. Suffice it to say there’s a trial scene (Stanley Andrews, the Old Ranger, is the judge, in his last film role) and we wonder (though not terribly much) which way the verdict will go. Will Kit be sentenced to hang for those murders, or will the true culprit be unmasked? Well, you may guess.

At the trial you can see Sheriff Frank Ferguson, Lovejoy as Cole, Abby and Best (lovers), Best’s ma and the marshal of Abilene, Douglas Spencer

I found this Western to be perfectly satisfactory, even good. It’s a classic ‘straight’ late-50s oater, done in nice color (though on my DVD the tints have turned a bit green), shot in pleasant Iverson/Corriganville/Vasquez locations by Harry Neumann, with good music by Martin Skiles (who did such a fine job on Fort Osage), skillfully directed in an almost Boetticheresque way, I thought, by Springsteen, and with a very good cast. Brian Garfield said that Lovejoy “makes it bearable, but only just” but I think that’s harsh. If you like your Westerns actionful and densely plotted, you’ll go for this one – even if it has nothing to do with the real Cole Younger, who was not a gunfighter in the Hollywood sense in any case… 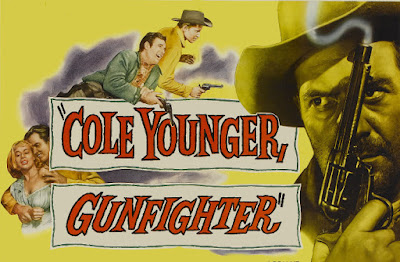