Red and Beaver save the day

We’ve kind of overlooked Allan ‘Rocky’ Lane on this blog till now. I’ve mentioned him from time to time but not reviewed one of his oaters, as I recall. It’s time to put that right because RG Springsteen directed quite a few of them and we’re having a bit of an RG-fest right now. 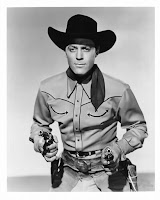 Lane (Harry Leonard Albershart, born 1909 – or some say 1904 – and died in 1973) started as a promising matinée idol spotted by Fox talent scouts and cast as romantic lead opposite June Collyer in 1929, but it didn’t quite take, and when he moved over to Warners in the 30s, that didn’t work very well either. In the late 1930s he was back at Fox but taking smaller roles. In 1940, anxious to lead again, he signed for Republic and found immediate success with King of the Royal Mounted, a Mountie-always-gets-his-Nazi-spy serial based on the Slesinger comic (itself vaguely based on a Zane Grey tale) and directed by William Witney and John English. In 1943 Lane starred in a more Western serial, the John English-directed Daredevils of the West, and three feature oaters as lead followed in ’44, one directed by English and two by Lesley Selander. By 1946 he was well established as one of Republic’s screen cowboys, along with the likes of Bill Elliott and Monte Hale, not perhaps quite in the same league as Gene Autry or Roy Rogers but still popular with the movie-going public, especially its more juvenile members.
.
. 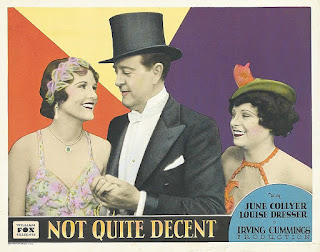 Lobby card for Fox’s 1929 picture (now lost) debuting Allan Lane.
But a career as romantic lead was not to be.

In the fall of 1946 Lane made his first appearances as Red Ryder, in Santa Fe Uprising (released in November) and Stagecoach to Denver (December), both Springsteen pictures. Red Ryder would be his most famous role (that and later being the voice of Mister Ed). I shall be discoursing later on Red Ryder in his many incarnations (comic, radio, serial and feature) but today suffice it to say that in 1938 artist Fred Harman and writer/commercial genius Stephen Slesinger started a Western comic strip. It would boom into movies, radio shows, contests, merchandising tie-ins and personal appearances. In fact it became big business. Republic did a deal with Slesinger and started a 12-part Red Ryder serial in 1940, with Don ‘Red’ Barry in the title role (his nickname coming from the part), and then the studio branched out into features, with both Wild Bill Elliott and Allan Lane taking the lead, and Robert Blake in both cases as the young Apache sidekick Little Beaver. Later, Jim Bannon and Don Kay would team up as Red and Beaver in four Eage-Lion color movies. Although pilots were made, rather curiously perhaps Red Ryder never made the leap to TV, unlike its radio rival The Lone Ranger.

In this early Rocky Lane one, a 56-minute black & white cheapie in many respects but done with zip, there’s a classic town crook who wants to own the whole valley, Big Bill Lambert (good old Roy Barcroft), with henchmen, obviously, they were obligatory, and also a bought and-paid-for sheriff (Ted Adams). Red, aided of course by the faithful L’il Beaver, will foil the bounders’ dastardly plot. No one would accuse this plot of being very original, but that’s half the fun. We’re in familiar territory. 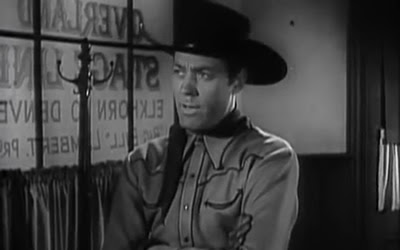 Red will save the day

The matronly Duchess, Red’s auntie (a key figure in the Ryder saga) is this time played by Martha Wentworth. She is on the stagecoach with a little orphan boy, Dickie (Bobby Hyatt) and the story will revolve around him. One of Big Bill’s henchpersons sabotages the stage, which crashes, killing the land surveyor traveling inside and gravely injuring the child. The kid is taken to a nearby farmhouse, owned by comic-relief old-timer Coonskin (Emmett Lynn), and the doc (Tom Chatterton) is called. But a risky operation is needed, and he can’t do that without the permission of the next of kin. So the boy’s nearest relative, an aunt, is sent for, from Denver. 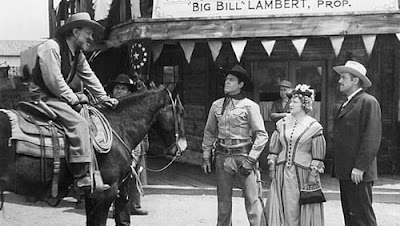 Now comes more skullduggery. Big Bill kidnaps the aunt, and the new surveyor, imprisons them in a remote cabin, and substitutes his lackeys. The glam Beautiful (regular Peggy Stewart) will pretend to be the aunt (you can tell she’s a no-good because she smokes) and a certain Taylor (Stanley Price) will impersonate the surveyor. This latter will, with jiggery-pokery masterminded by Big Bill, redraw the boundaries of the sections, dispossessing the local ranchers and homesteaders and causing them to be evicted. Such criminality! Bill is a skunk. No other word will do. 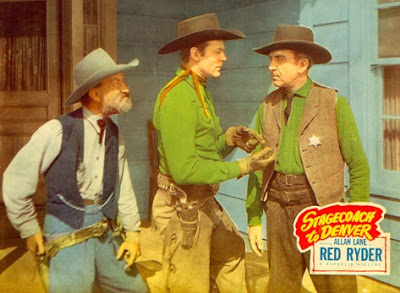 The crime boss is aided by a crooked sheriff

The best character is Beautiful. Though clearly a gangster’s moll, she has a good heart, and will melt when faced with the suffering of the little tike. Ditching her rascally employer, she will be gallant in the last reel – although, being a baddie, she cannot survive. Such are the hard moral rules of 40s Westerns. She must perish. But she will do so heroically, saving the life of the infant. We might even consider shedding half a tear. 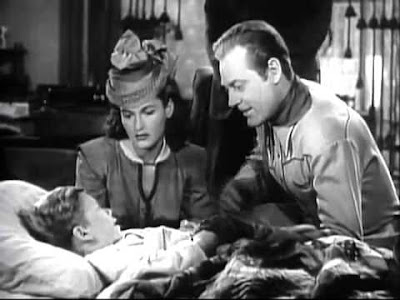 Little Beaver reminds me very much of Tonto. He is pretty well only a servant, doing all the menial tasks at the bidding of his master, and meekly replying, as Tonto always did, “Me do.” 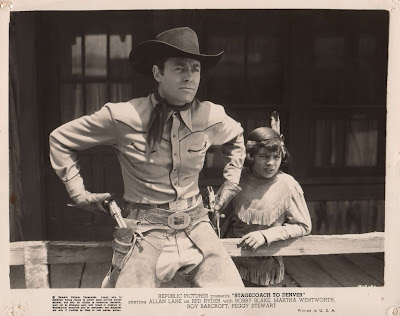 There will be much galloping hither and yon, and a fair bit of shootin’, before right will prevail over might. The baddies will be eliminated and good will triumph over evil. The (rather cloying) last scene will have the recovered boy playing hopscotch with Beaver and receiving a pony from Mr Ryder. “Gee whiz, Uncle Red,” the child will enthuse. Well, probably the theater-goers (average age, ten) were pleased.

Bud Springsteen did a competent job, and Rocky made an adequate and rather square-jawed Red Ryder. Satisfactory. 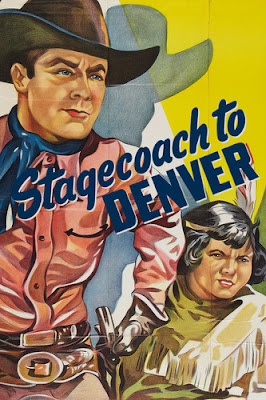