Wayne is a crack shot

.
.
I found Wayne Morris to be quite good in The Desperado (1954), I would almost say surprisingly good, as a hard-bitten gunfighter. So I thought I’d have a look at another couple of his oaters and see if I need to re-evaluate his trail-cred – for I have been dismissive in the past of blonds as Western leads. They don’t cut it, you see. With rare exceptions. So today it’s a picture from the year before The Desperado, still Allied Artists though, and still black & white, The Marksman.
.
. 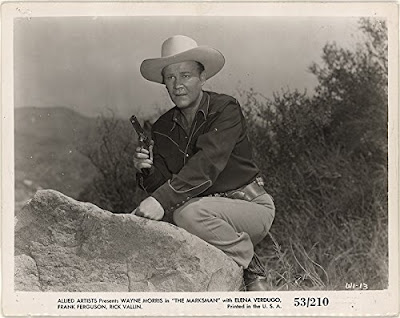 The Marksman wasn’t perhaps the most stellar Western of ’53, a marvelous year, but it is still eminently worth a viewing. 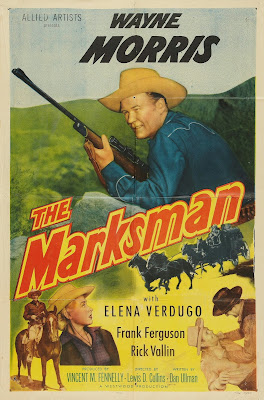 Not the greatest Western of 1953 but OK

Marshal Bob Scott (I Stanford Jolley), who wears a rather silly 1940s fancy gunbelt borrowed maybe from the Durango Kid or Bob Steele, hires Mike Martin as a deputy because he is durn good with a rifle. Martin doesn’t really like this idea: being taken on pretty well as executioner. He has always dreamed of being a proper US Marshal, righting wrongs and bringing justice to the downtrodden, and such. But he takes the job, and with his marksmanship he brings in dead or alive, mostly dead, all sorts of malefactors.

One of the reasons that Deputy Marshal Martin is so uncannily accurate with his rifle is that it is fitted with a telescopic sight. Such equipment is rarely seen in Westerns, unless they are Westerns set at the end of the nineteenth century or beginning of the twentieth. Yet Wikipedia
tells us (so it must be true) that the first documented telescopic rifle sight was invented between 1835 and 1840. Gun News Daily (I am sure your subscription is up to date and you will have seen this article) tells us that “Union snipers generally favoured the breech-loading Sharps rifle – becoming ‘Sharpshooters’ – whilst their Confederate adversaries preferred the powerful yet rare British Whitworth rifle, which many credit as being the most accurate rifle in the world at the time and the first modern sniper rifle.” So I wonder why more movie gunslingers didn’t use them. Actually, one knowledgeable reviewer says that the firearm used in the movie is a 1949 Remington hunting rifle. Oh well. 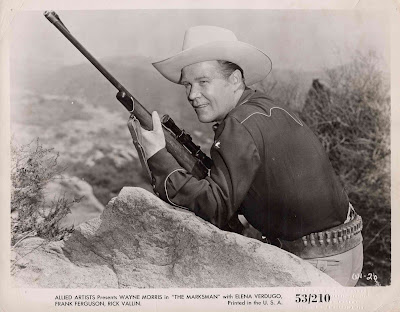 That’s why he’s a crack shot

When the marshal goes undercover, as a prospector, searching for a gang of rustlers, and disappears (in fact he is killed in the line of duty, but Martin doesn’t know this yet) Deputy Martin talks the governor (Tom Powers) into letting him go under cover too, also as a prospector, to find the missing lawman.

Well, he meets a lady novelist, Jane Warren (Elena Verdugo), out West researching her next book, and she is duly impressed at the tall, handsome ‘prospector’ who knows the ways of the West. 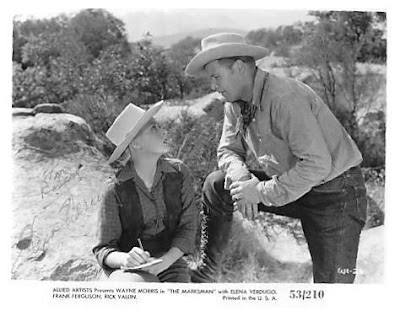 Not the first (or last) lady novelist in a Western

Now, who should be the leader of the rustlers, posing as an innocent rancher who has also suffered losses, but our old pal Frank Ferguson. Excellent. Frank was versatile, being equally at home as avuncular goody and two-timin’ bad guy. He is the latter here. He has henchmen,
naturally. They were de rigueur. They are Santee (Rick Vallin) and Kincaid (Robert Bice). There’s quite a tradition of Western characters being named Santee, most notably Santee (Glenn Ford) in Santee. But this Santee is a lightnin’-fast gunslinger ready to kill for his boss. 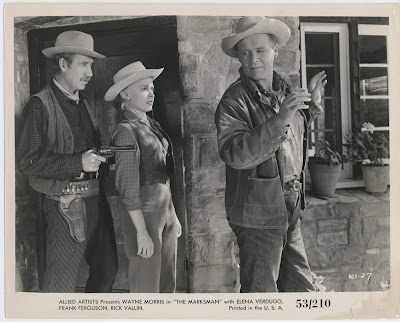 Frank Ferguson is soon revealed as the bad guy

Well, I can’t tell you how it pans out because that would be a spoiler. Perish the thought. But I can reveal that Frank uses the lady novelist as a human shield, the skunk, and there is a Johnny Guitar-ish lair. At any rate you won’t find it too hard to guess the outcome. And the lady writer promises that she will desist from penning lurid Western dime novels and instead turn her attention to cookbooks, thus satisfying 1950s expectations of what a good wife should be.