The not quite so magnificent seven return

.
.
1966 was rather the year, as far as Westerns go, of remakes and sequels. Originality seemed to be in short supply. The Magnificent Seven six years before had been such a hit (eventually: it was a slow starter) that a follow-up was inevitable. There was a slight problem, in that four out of the original seven (James Coburn, Charles Bronson, Robert Vaughn and Brad Dexter) were lying dead in graves in a Mexican village, and neither Steve McQueen nor Horst Buchholz, who had survived, could be persuaded to return. Horst (Chico) was back in Europe, being Marco Polo, and Steve (Vin) was being Nevada Smith for Henry Hathaway over at Paramount. There is a story that Yul Brynner (Chris), who loved the role, and the costume, insisted he would only make this film if McQueen were not involved. He had grown tired of McQueen’s constant attempts to upstage him on the first picture. McQueen initially expressed interest in appearing, but then decided the plot was too absurd and turned the film down. So the story goes, anyway.
.
. 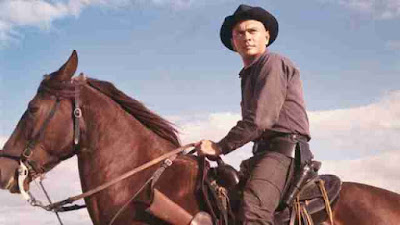 It was a Mirisch production, and UA knew how to milk a franchise, so despite a low budget the picture was in Panavision and Color De Luxe and shot by the talented Paul Vogel. Burt Kennedy directed and he’d come from the critical and box-office success of The Rounders at Metro the year before. And they used the same Elmer Bernstein music as in the 1960 picture. So Return had a fair bit going for it. 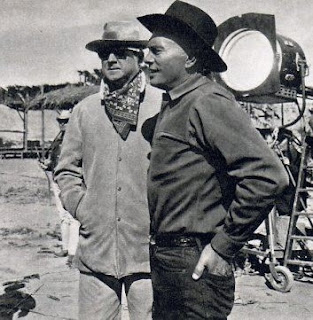 Burt and Yul on the set

But it was shot in Spain, Alicante locations being cheaper than Mexican ones, I guess (certainly there were fewer censorship problems) and the script was not created by Walter Bernstein, Walter Newman or William Roberts, as the original had been, nor by Kennedy himself (who might have done a good job) but by Larry Cohen, best known for low-budget horror flicks and blaxploitation pictures. Cohen wrote five big-screen Westerns, none of them very special. There are a few good lines in Return of the Seven, but the screenplay has little of the magic we remember so fondly.

One thing we can say: Return of the Seven was the best of the sequels, which were of ever-diminishing quality, at least until the 2016 remake. It got less than ecstatic reviews but earned $1.6 million when it came out and another $1.3 million on its 1969 re-release (when the word Magnificent was added to the title, probably hyperbolically), so that wasn’t too bad. Kennedy himself said, “It was all right. We didn’t have much of a budget or any big-name actors except Yul Brynner, but it was all right.”

In the first reel some Mexican bandits led by the feared Lorca (the great El Indio, Emilio Fernandez) and his chief henchman Lopez (Rudy Acosta) raid a village. We are supposed to recognize the village, though it has been teleported to Spain. A man gets a gun from a chest and rushes out. It’s Chico, of course, but this time played by Julián Mateos, slightly more genuinely Mexican than Horst Buchholz. But he is grabbed and taken away, like all the other menfolk of the village. We shall learn why later. His wife Petra (a different Petra, Elisa Montes) is distraught, and sends a boy to find Chris. 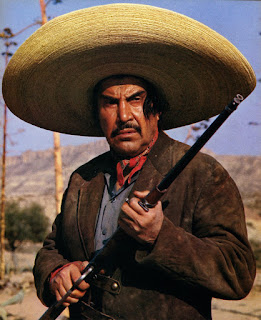 The great El Indio is the bandit chief. What a hat! 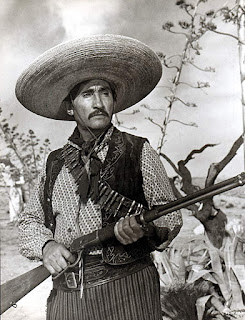 And Rodolfo is his No 2. Not bad headgear either.

Now we see a bullfight (unfortunately) and Chris is watching it. When Vin comes up Chris doesn’t say, “You look oddly different, Vin”. Though Vin does. He’s even dyed his hair. It’s Robert Fuller, you see, who took the role McQueen didn’t want. Fuller had finished at this time with both Laramie and Wagon Train, so I suppose he was once more a gun for hire. He’d done three big-screen Westerns before this one, with small roles, but this was the first in which he had co-starred. He doesn’t try for the folksy Vin McQueen did, and he certainly doesn’t try any antics to draw the limelight. He would never have got away with it. He’s OK, I guess. He talks about the role on a YouTube video, here, if you’re interested. “I had the best time of my life for three months with Yul,” he says. 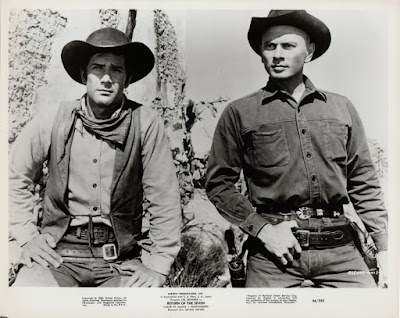 Once he learns from the boy the story, Chris goes to the local prison where he bribes the guard to release into his custody Frank (Claude Akins) and a certain Luis Delgado (Portuguese actor Virgilio Texeira). So that’s four already – Chris, Vin, Frank and Luis. Then they see the gabby Colbee (everyone knows Chris, and vice versa) being defenestrated. It’s Warren Oates, a serial philanderer who needs to get out of Dodge fast (or out of this Mexican town anyway) to avoid irate husbands, so that’s five. 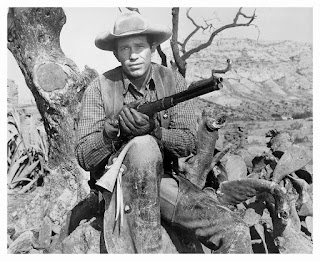 Warren is a woman chaser 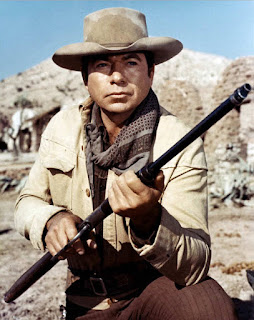 Claude says he’s not doing it for friendship or money. Why then? 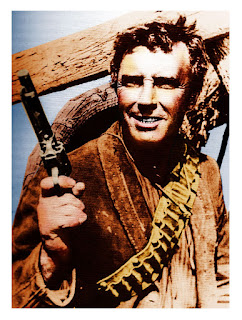 And now, as if the bullfight wasn’t bad enough, we have another horrible animal encounter, a cockfight. And there they recruit Manuel (‘introducing’ Jordan Christopher, in his only Western), who will make six, and with Chico, when they find him, that will be seven. So the recruitment process is all completed in a matter of a few minutes this time. 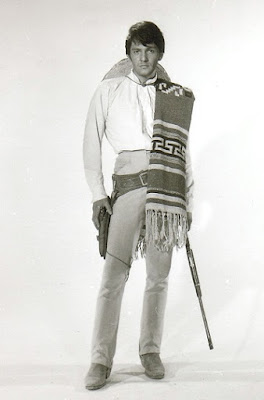 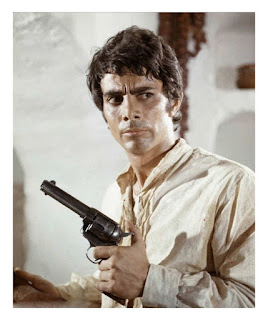 Unfortunately, the characters of the seven are not so charismatic, distinct or memorable as they were first time, nor are they developed much as the movie progresses. It’s all OK but slightly less then magnificent. Still, they gallop over bits of Spain to the strains of Elmer Bernstein.

Yul has a two-gun rig, this time, I note. Otherwise his costume is the same though. 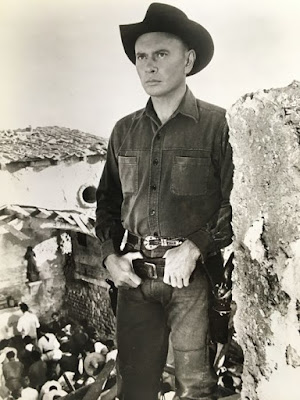 The village has got a full-time priest now, and it’s Fernando Rey, and he seems to be more or less in charge. He tells the compadres that the wicked Lorca has taken all the men as slave labor to build a mausoleum for his fine sons who died fighting (actually they were lowlifes). Lorca’s obsessed with this project. It’s all he cares about. 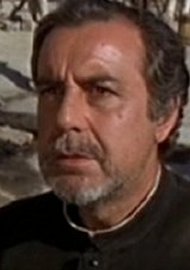 Chris rides calmly into the building site where the men are working and talks to Lorca. “You spared my life once,” Chris tells him. Is this supposed to be Calvera returned from the grave then? No, it can’t be. Chris must have had his life spared by numerous Mexican bandits. Chris & Co get away from there (Winchesters help) and go back to the village.

Well, once again they start building walls and so forth, to defend the place from the coming attack. They were used to this by now. Lorca duly assaults the place, wearing the most splendid hat and liberally shouting one of his few lines, the classic “Vamonos, muchachos!” 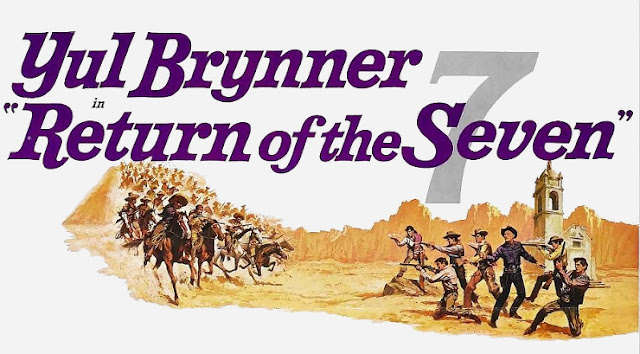 Chris decides to take the attack to the foe, and the showdown nears (it’s a shorter film than the 1960 one). One by one the seven are whittled down, though we care less than we did about who dies because the characters haven’t really been defined. The same ones survive as did before (that’s probably not a spoiler) though I thought Chico’s fate was a cop-out. Perhaps Walter Mirisch already had his sights set on Mag Seven 3.

Sadly, that one, Guns of the Magnificent Seven in 1969, would be worse. I might say even worse, though on balance I tend to agree with Burt Kennedy’s own assessment of Return of the Seven, it was all right. But when you make a sequel, almost a remake, of such a truly great Western as John Sturges’s original, praise be unto it, you are almost doomed to failure from the start, Burt. Sorry.

PrevPreviousIn a Valley of Violence (Focus World/Universal, 2016)
NextGuns of the Magnificent Seven (UA, 1969)Next
Jeff Arnold © 2022 – All rights reserved – Designed by BetterCallChris
Scroll Up