Guns of the Timberlands by Louis L’Amour

Guns of the Timberlands is an earlyish novel from Louis L’Amour, published in 1955, by Dell. In many ways it has the good old plucky homesteader vs. ruthless rancher plot, one of the oldest in the business, though with the twist that the hero is a small cattleman and the villain wants to log off some of the cattleman’s land to sell the timber for railroad ties to the Mexican government, and will stop at nothing to do that. 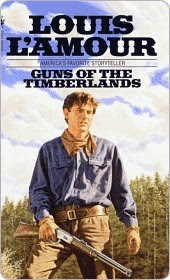 It came between Heller With a Gun and To Tame the Land, all three novels published in ’55

The good guy has a group of tough cowpokes around him, and has their respect, while the bad guy uses equally tough lumberjacks, augmented by two professional hired guns.

The story is set somewhere in southern New Mexico, near the Arizona line, in and around the town of Tinkersville, named for its founder, wily old Sam Tinker (Edgar Buchanan would have been good in the role), who now runs the hotel/saloon. Clay Bell, out of Tennessee by way of Texas, as a young man a mule-skinner on the Santa Fe Trail, a major in the US Cavalry during the war, sometime Texas Ranger under McNelly, and gold prospector, i.e. a classic Western type (Randolph Scott, maybe), now runs cattle up on fine grazing land, and behind him is a great stand of timber which he loves and wishes to preserve. There’s quite a modern eco-message to the tale. 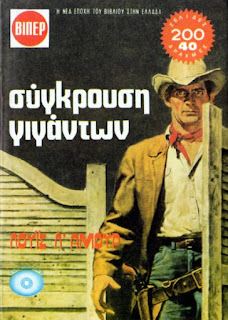 It would be all Greek to me

Jud Devitt, besuited Easterner (and therefore baddy) is the rich man who wants that timber and will employ any means necessary, legal or otherwise, to get it. He’s a hard nut, an accomplished pugilist. I imagine David Brian would have played him well. He has been enticed to Tinkersville by the scheming fat banker (and therefore baddy) Noble Wheeler – who is anything but true to his first name. Ray Burr will do nicely for this part.

Jud arrives with his fiancée in tow, Colleen (a redhead, natch) but she is a decent person who is increasingly disenchanted with the character of the man she first thought a handsome go-getter. So it’s all set up for a classic love triangle. Jud and Clay will be rivals for her affections. I’m going for Rhonda Fleming as Colleen – not Maureen O’Hara, I beg you.

There has to be “the other woman”, of course, and that’s the blonde Randy Ashton (Dorothy Malone for me), who is installed by philanderer Jud in a house in town but who also likes him less and less. She is wooed by one of Clay’s hands, Bill Coffin. L’Amour’s women were rather 1950s, and though they stand no nonsense and are self-willed, they are also pretty domesticated. We are told that Randy is “a girl whose heart beat in time to cotton print and kitchens.” Feminists may wish to steer clear of this book.

There’s quite a tradition of lumberjack Westerns, in the movies anyway. L’Amour himself had done a bit of logging – one of the many jobs he did as a young man – and so was equipped with the knowledge to write about it. Here the timberjacks are the troops of the bad guy and little more. A couple are so thuggish that they stomp a young cow hand into a coma, and they will pay the price for that brutality at the hands of the decent Western cowboys (Noah Beery Jr types). 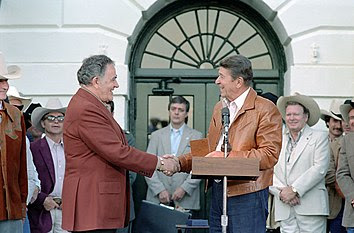 Louis gets the Congressional Gold Medal from Ron

There’s skullduggery behind the scenes as Jud not only relies on force majeure on the spot but also pays an agent to oil the wheels in Washington and get what he wants that way. Crooked politicians, who knew?

We pretty much know the outcome from page 1 but that doesn’t stop us enjoying a Western. Old Sam Tinker deals with slimy banker Wheeler with a .41 derringer, so that sent the book up in my estimation. Like many classic Westerns, it builds to a climax dictated by a train time: the two pro gunslingers plan to execute their commission (and Clay) and then nip aboard the 3 pm out. It is not the first or last time that a train schedule will be cause for mounting tension. It was 3 pm but could just have well been 3:10.

The protagonists will battle it out with fists. L’Amour had also been a successful boxer, so knew a bit about the ‘art’ of slugging. 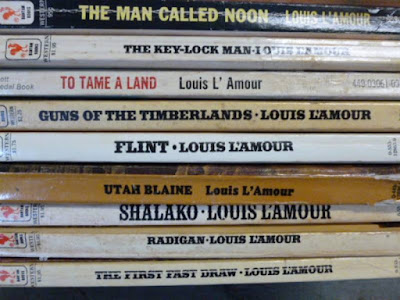 Guns of the Timberland is available on Kindle and you’ll probably enjoy it.

Alan Ladd’s Jaguar Productions made a movie version, Guns of the Timberland. Click the link for a review of that.

PrevPreviousRodeo and the Western
NextGuns of the Timberland (WB, 1960)Next

PrevPreviousRodeo and the Western
NextGuns of the Timberland (WB, 1960)Next
Jeff Arnold © 2022 – All rights reserved – Designed by BetterCallChris
Scroll Up