Today, another consonant-rich alliterative title, The Beautiful Blonde of Bashful Bend. Writer Earl Felton’s original screen story was titled The Lady from Laredo, so that was along the same euphonic lines.

Writer/director/producer Preston Sturges’s last Hollywood film was his only Western, a farce (farce defined by Webster’s as “a light dramatic composition marked by broadly satirical comedy and improbable plot”) which has you chuckling here and there, though is unlikely to be included in anyone’s list of  significant films. The humor is, er, broad, and there’s a good deal of slapstick, but all in all it’s quite amusing.

In a way it’s a parody of the Western conventions. It’s the gal who has the gun skills, not the man, and when she is taken for the schoolteacher, instead of the demure bringer of civilization we are used to, she is the cause of anarchic mayhem in the community. Even in the climactic gunfight (also a parody) it’s the townswomen who win the day against the bad guys, by pelting them with pots and pans. 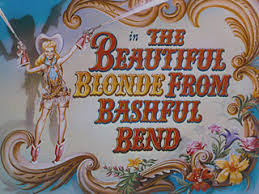 The movie’s production values were high: it was shot in Technicolor with a substantial cast on a $2.25m budget. Actually, it was scheduled to go into production in 1947 but Zanuck postponed it because of the high cost. It reminds me in some ways of the same studio’s A Ticket to Tomahawk (yet more alliteration) of 1950, a picture which was to have been helmed by John Ford (though he was persona non grata at the time and the execs yanked it). 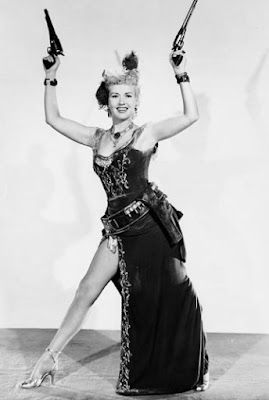 The gal with the guns

Bashful Bend starred Betty Grable – it was her only Western too. Grable figured high in the Quigley Poll’s Top 10 box office stars throughout the 1940s, and between 1946 and 1947 was listed as the highest-salaried woman in America. She was about as big a star as you could get. She plays Winifred ‘Freddie’ Jones, whom we meet in the opening moments as a small child (Mary MacDonald) receiving a shooting lesson from her grandpa, good old Russell Simpson. We are so used to this scene in Westerns (though rarely is it a little girl being taught). Usually the only advice imparted is to squeeze the trigger and not pull it. It’s all the tutors can think of to say. Here, however, Grandpa’s recommendation is, Never wait too long between shots or your finger may change its mind. 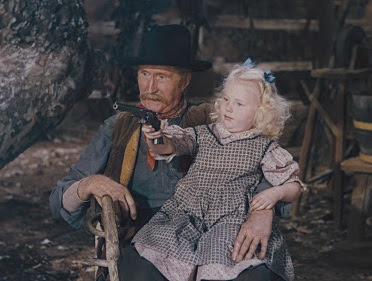 Well, Freddie grows up to be mighty handy with a shootin’ iron, though not entirely unerring in her aim. Now a saloon entertainer in the great metropolis of Bashful Bend, while singing her first song, Every Time I Meet You, she becomes jealous when her man, slick gambler Blackie (Cesar  slinks off with a glam Parisian called La Belle Bergère (our old pal Marie Windsor) and so Freddie decides to shoot him, missing, however, and instead hitting Judge Alfalfa O’Toole (Sturges  She explains all this to the helpful sheriff (Al Bridge) while sitting in one of his cells. 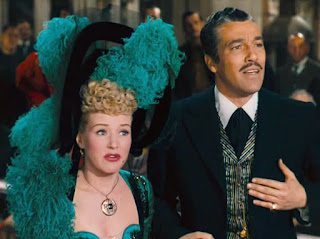 Freddie and her gambler amour

The judicial bullet is extracted by a myopic doc (Hugh Herbert), excuse for more broad comedy. The hatchet-faced Mrs O’Toole (Margaret Hamilton) now comes into play, wanting to know what her husband was doing in a saloon gal’s bedroom in the first place, and we also meet Conchita (Olga San Juan), Freddie’s feisty sidekick. Freddie soft-soaps the judge who, despite the presence of his lady wife, begins to come round, but unfortunately Freddie loses her temper again and manages to shoot the judge once more in a similar area, though he has, er, turned  and Conchita wisely decide to beat it, taking the train for the next town, Snake City. 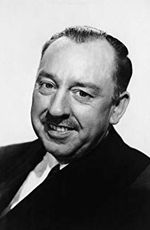 Porter is the judge

There, a reception committee awaits Hilda Swandumper, the new schoolma’am, and they naturally (in a farce) take Freddie, and her Indian maid, for such. The surly Gus Basserman (Richard Hale) and his two village idiot sons (Sterling Holloway and Danny Jackson) do not join in the welcome but Freddie manages to use her shootin’ skills surreptitiously to thwart them. 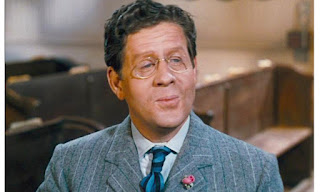 Freddie is wooed by the School Board president’s son Charlie (Rudy Vallee), church organist in pince-nez who, however, owns a gold mine. She cannot show her prowess with a revolver  reward out on her, but she still manages to shoot the living daylights out of two of her pupils, the Basserman brothers. Actually, as Holloway was 42, he seems a little geriatric to be in grade school with the other kids, but I think he was a late developer.

Now gambler Blackie tracks her down and appears in Snake City.

Many complications ensue, with, in the best tradition of farce, people hiding, falling over, opening doors at just the wrong/right moment, and so on. There is much hilarity. It all climaxes in a huge gunfight involving, on one side, the Bassermans and Blackie, and on the other Freddie, backed up by the whole town. In the end Freddie is obliged to bring her markswomanship to bear and saves the day, falling into Blackie’s arms (as we knew she would) but because of her pinpoint accuracy with a .45 Swedish US Marshal Jorgensen (El Brendel, about as Swedish as I am but never mind) recognizes her and sends her back to Bashful Bend to stand trial for JBH (judicial bodily harm). There is a chaotic trial in the course of which, you’ve g 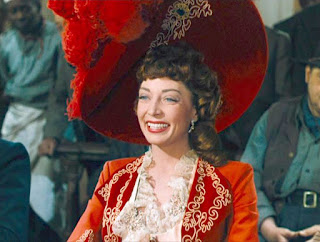 Marie is ‘the other woman’

The Wikipedia page on the movie says “Whether Sturges or another director worked on the January [1949] shoot, which was to change the ending of the film at the insistence of Zanuck, is unclear.”

Well, if you like fast-moving comic chaos you’ll enjoy this picture. The Hays Office warned Fox sternly that it “contains entirely too much dialogue and action which concerns itself – in a quite blunt and pointed way – with sex.” The picture was marketed with the saucy tagline “She had the biggest Six-Shooters in the West!”

At the time reviews were very dismissive, unfortunately, and the movie got nowhere at the box-office, grossing only $1,489,000, 65% of its budget. Bosley Crowther in The New York Times said that the picture had “little more comic distinction than a flat-handed whack on the rump.” Variety was no politer, calling it “a rather silly western farce, loosely concocted.”

More recent appreciations have included Dennis Schwarz, who said, “The film lacks any subtleties, moves too much into silliness and shoots itself in the [posterior] once too many times for its prolonged spoof to work smoothly”, though he also opined that it “is not as bad as most critics thought at the time. It seems to get better with age.” Brian Garfield said, “Mostly, it’s foolish slapstick; a fizzle.”

To me, the critics have been a bit harsh. I think it’s quite a fun way to spend 77 minutes of your lockdown.