Gold of the Seven Saints falls into that category of gold-lust Westerns, with characters going crazy to get their hands on the yellow metal. The Treasure of the Sierra Madre (1948) did it best, with Lust for Gold the following year a good runner up, and there were many imitators – which never quite made the grade. Brian Garfield says of this one, “two-karat at best”. But actually, maybe that’s a bit harsh: Seven Saints is rather good.

We perhaps think of Clint Walker as primarily a TV cowboy, for he was Cheyenne Bodie, of course, but he had a good line in Western features too. He did eleven, and this one came between Yellowstone Kelly (1959) and The Night of the Grizzly (1966). He was so tall and broad you wouldn’t give odds on the grizzly winning a wrestling match. And he had that strong-silent-type persona that was ideally suited to the genre. Actually, he could act.

His co-star, however, was in his only big-screen Western, and without being unkind, it was probably just as well. At this time (1960 – 61) Roger Moore was doing a stint as Bret and Bart’s English cousin Beau in Maverick but it wasn’t entirely a success, and so Maverick and Seven Saints were his only forays with a Stetson and six-gun. This was before he was The Saint and of course well before he was 007. In Seven Saints he plays the charming-rogue partner of Clint in their prospecting venture. He puts on an ‘Irish’ accent which may have been a mistake. He’s quite personable, but you can’t say much more.

Seven Saints was directed by Gordon Douglas. Mr Douglas, recently spotlighted in Jeff Arnold’s West’s world-famous (hem hem) The Westerns of… series, helmed a good number of oaters, not all good. He himself avowed to being a journeyman director who churned out pictures on demand and with few artistic pretensions – he said he had a family to feed and was happy to do it. But every now and then he turned in a really good one. The Nevadan (1950), with Randolph Scott, was excellent, as was Fort Dobbs (1958), also with Clint. My favorite of his was The Fiend Who Walked the West (1958). He has a sure hand on Seven Saints, building tension and making the most of the fine locations.

He was helped by having a good cast of character actors in support, notably Chill Wills as a less-than-respectable doctor and the splendid Robert Middleton as a fat Mexican rancher – unlike Moore with a convincing accent. Gene Evans is the chief villain. It’s a good line-up.

In some ways, in the early 60s one might have expected color: big Technicolor pictures like The Magnificent Seven (1960) were now the thing and even Universal’s not quite A-picture Westerns with Audie Murphy such as Hell Bent for Leather and Seven Ways from Sundown (both 1960) were in Eastmancolor. But on the other hand there were still some very classy black & white Westerns in the early 60s – The Man Who Shot Liberty Valance, The Misfits, Lonely Are the Brave – and Gold of the Seven Saints was shot in a glowing monochrome, using lovely Utah locations, by the great cinematographer Joseph Biroc, so we were hardly short-changed.

There isn’t too much plot. In the first reel Roger Moore pays for a horse with a gleaming nugget, which arouses the gold-lust of Gene Evans (in the eleventh of his twenty-two Westerns). Moore returns to his partner Clint at their strike, and the successful prospectors decide to light out pronto for the wide-open town of Seven Saints, to whoop it up and get clear of danger. But of course Gene and his henchmen follow. They want that gold. So it’s a pursuit drama, relying more on growing tension, as the outnumbered pair’s horses tire and water runs short, rather than on the sporadic bursts of action (though those are quite well handled, as usual with Douglas).

Shooting it out with the bad guys, our heroes are assisted by a stranger in a top hat who proves mighty handy with a rifle. It’s Doc Wills, whose professional services come in handy when Roger is hit. But of course he’s no saint and he too has his beady eye on that gold.

The trio, now, meet up with the rascally rancher Gondora (Middleton excellent as ever) who offers them safety and hospitality at his rancho – but we know immediately he’d like that gold too. They’re all after it. Here we have a rather perfunctory bit of love-interest, as both Clint and Roger lust after the glam ‘ward’ of Gondora, the fair Tita, played by Italian actress Letícia Román, Fanny Hill in 1964 but not known for her Westerns.

You do kind of know what will happen well before the final reel but it doesn’t matter: it’s still well handled and quite a lot of fun. Roger has to undergo torture by constricting rawhide band round his chest, and there are other bits of action, including a dangerous and, as it turns out, disastrous river crossing.

Enjoyable, well paced, occasionally amusing, Seven Saints is a straight-down-the-line action Western, maybe rather 1950s in style, but what’s wrong with that? 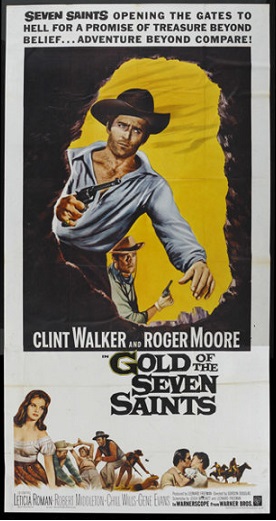