Since we are on a bit of a Spencer Tracy kick at the moment I thought we might have a look at his final contribution to our noble genre: in 1962 he provided the narration of MGM’s giant picture How the West Was Won. 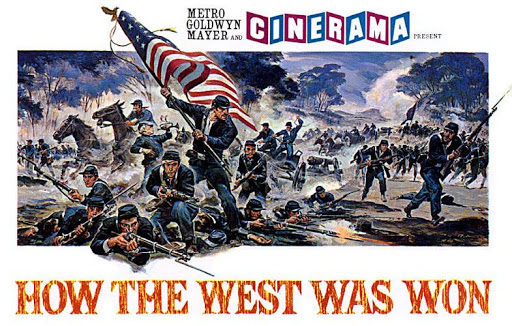 It was certainly a massive project. They tried to capture the whole history of the West from the 1830s to the 1890s (with even a present-day epilogue) and they crammed in every known Western cliché, from trappers and mountain men to a wagon train, a buffalo stampede, the stagecoach, an Indian attack, the Civil War, the telegraph and the railroad, a cattle drive, gamblers, saloon gals, outlaws and lawmen, and of course a train robbery, to name but a few. They used locations all over the West (including Monument Valley, naturally) and it took ten months to shoot. They stuffed the picture with a huge and stellar cast, all the actors necessarily relegated to cameos, and they used three big-name directors (and numerous assistants) and five DPs. They shot it in the new Cinerama process, using three cameras, with the finished film projected onto giant wrap-around screens. The picture had a budget of $15m, really big money for those days. The runtime was 164 minutes. In terms of scale it put in the shade even huge early epics such as The Covered Wagon, The Iron Horse and The Big Trail.

And it worked. At least, it was a commercial success. Released in February ’62 in the US, it drew crowds, competing with the likes of The Longest Day and Lawrence of Arabia that year, being popular well into ’63 and grossing $46.3m in the US alone. It also received eight Oscar nominations, three of which it won (Best Writing, Best Sound and Best Editing). Some of the critical reception was also very positive. Variety called it “a magnificent, exciting spectacle” and complimented “some of the best lensing ever seen”. The New York Herald Tribune praised it as “not only a tribute to the American past, but to American movie making.” The score was listed at #25 on AFI’s 100 Years of Film Scores. The picture gained a perfect 100% rating on Rotten Tomatoes. In 1997, the film was selected for preservation in the National Film Registry of the Library of Congress as being deemed “culturally, historically, or aesthetically significant”.

And yet. The New York Times of the day dismissed it as “a familiar saga”, adding that “Everything in this latest feature on the king-size Cinerama screen is a dutiful duplication of something you’ve already seen in anywhere from one to a thousand Western movies in the past 60 years.” Further: “what’s been done by three directors in this nigh onto three-hour-long film is stitch together a mammoth patchwork of Western fiction clichés. With little or no imagination and, indeed, with no pictorial style … they have fashioned a lot of random episodes, horribly written by James Webb, into a mat of outdoor adventure vignettes that tell you nothing of how the West was really won.” The review finished by saying that “an excellent opportunity to do a real historical drama of the West was wasted in this Hollywood-cured ‘epic’. It should be called “How the West Was Done—to Death.”

More recent commentators too have panned it. In his A Pictorial History of the Western Film, William Everson wrote, “Far from bring the ‘definitive’ Western it set out to be [the picture] was merely a superficial circus … never achieving even conviction, let alone poetry or the genuine epic stature it sought.” Brian Garfield, in his 1980s guide Western Films, said, “Without question the biggest Western ever filmed, How the West Was Won inevitably is overblown and self-conscious and unwieldy – it’s a big movie rather than a great movie.”

I myself am in the Everson/Garfield camp. I find this picture plodding, uninspired and fake. I can just imagine the moguls at MGM in 1961. The conversation went like this:

“We’ll put together the biggest Western ever. Money no object.”

“Why stop at Ford? We’ll get Hathaway too.”

“And let’s throw George Marshall in. He was great on Destry.”

“Now, stars. We’ll need them all. All! Peck, Stewart, Fonda, Wayne, Widmark, get their agents on the phone right away.”

“Lee J Cobb. Malden. Robert Preston. Oh, and we better throw in a young handsome one. What about this young fellow Peppard?”

“Who shall we have as female lead?”

“Debbie Reynolds. She’s still in her 20s. Just. And she did all those songs in Singin’ in the Rain. We’ll need songs.”

“Metrocolor and three-strip Cinerama, of course. It’s crap but it’ll bring the masses in.”

“Music? Alfred Newman better do the score. Based on a cheery theme and something folksy like Greensleeves.”

“Sure, the public love corn.”

“Well, we’ll start with a mountain man, obviously. Stewart’ll do for that.”

“Then a wagon train. That’s where charming gambler Peck can meet Reynolds. She’s maybe inherited a gold mine.”

“We’ll need some Civil War scenes. Ford, of course. Wayne as Sherman, that wouldn’t be ridiculous, would it? He did it on TV in Wagon Train. Shock and awe in those scenes. Lots of cannons. Thousands of extras.”

“Yes. Of course, we’ll have to have some outlaws and tough marshals to clean up the town. Eli could do the badman gunslinger. You know, Magnificent Seven and all.”

“It’s all coming together. Let’s have another martini.”

“Hey, I’ve got another great idea. We’ll get Spencer Tracy to do a voiceover narration. History of the West.”

Then the reality. Hardly anyone saw the movie in three-strip Cinerama and MGM couldn’t be bothered to film it simultaneously in normal format so we all have to watch it now in three sections with horses crossing the screen in a V-shape. Hathaway is said to have remarked, “That damned Cinerama. Do you know a waist-shot is as close as you can get with that thing?” In mailbox format, which is how 99% of people saw it, faces are indistinguishable in long shot. And the three cameras used filmed actors separately so that when the montage was made they appeared to have no eye-contact with each other – because they had none. The movie was, thank goodness, one of only two made using the process before it was unceremoniously (and expensively) dumped.

The James R Webb/John Gay script was a total clunker, full of corny clichés and lines like cement. Unbelievably, the picture won an Oscar for that screenplay. The action scenes, such as the Malden family on the raft, are all false. Where stuntpersons are used for women, they are too obviously men in dresses in the rapids. The movie is way too long and drags.

Debbie Reynolds was not good. The songs were lousy anyway and there were too many. Harry Morgan was Grant! You can’t stop laughing throughout the scene. Chicago-born Malden, a scenery-chewer of the first water, was always completely hopeless in Westerns. Peck is miscast as a cad. In fact they are all miscast. Stewart, ridiculous as a mountain man, looks like his fiancée’s grandfather. His supposed father-in-law (Malden) was four years younger than he was. Even Fonda can’t bring authority to the acting. He’s a buffalo hunter.

It just goes to show: huge budget, top direction, mega stars, expensive locations, famous photography and what do you get? A weak Western. This movie was really a giant gimmick.

Of course it has its plus points. A motion picture doesn’t receive so many plaudits and do so well at the box-office by being a total turkey. You have to admire the spectacle and scale. There’s some quality John Ford sentiment in the Battle of Shiloh segment. The picture has its fans, still today. Many admire the scope and breadth, and they’re welcome. For me, though, as I say, despite the scope and breadth, it’s still a weak Western.