The fourth in the fine series of Budd Boetticher/Randolph Scott Westerns (click the links for essays on them) after Seven Men from Now, The Tall T and Decision at Sundown (ditto), resembled the third more than it did the other two. Like Decision, it was not written by Burt Kennedy but by Charles Lang. 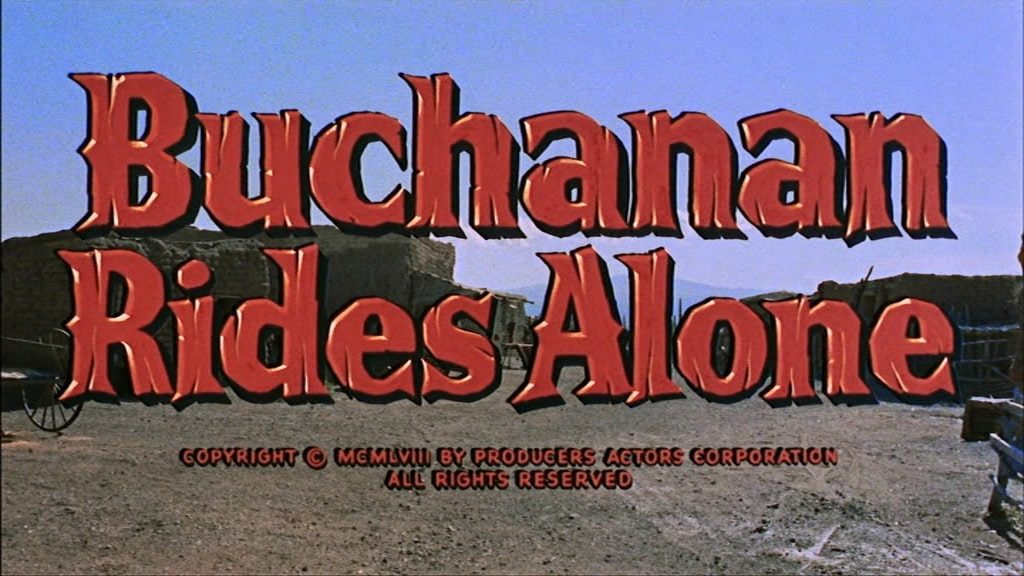 Or at least it was and it wasn’t. It seems that Boetticher rewrote extensively, aided by Kennedy. Boetticher said:“Charlie Lang was the screenwriter, and one of my best friends. He was known as Froggy Lang. He was getting a divorce at the time, and he was drinking … I read [the script] and it was awful. We couldn’t shoot a god-damned thing. I called Burt and said, ‘Come to Tucson. We’re gonna make a piece of shit if you don’t get over here’.” Much of the writing was apparently improvised day-to-day on the set, and DP Lucien Ballard underlined this in an interview, though it was denied by Lang and also by Western Clippings contributor Michael Fitzgerald.

Whatever the truth, Kennedy’s stamp is definitely on some of the dialogue.

The story was based on The Name’s Buchanan, one of the Buchanan series of novels by ‘Jonas Ward’ (William Ard and later writers licensed by his estate – actually Brian Garfield wrote one of them). These featured a cheerful tongue-in-cheek central character, so Scott therefore goes for a lighter interpretation than in previous episodes, in which he was a driven man bent on revenge – although even in Buchanan he still gets tough when the going does and we might call the atmosphere ‘darkly comic’. Still, the tone of the picture is lighter. Decision at Sundown the previous year had been especially dark. 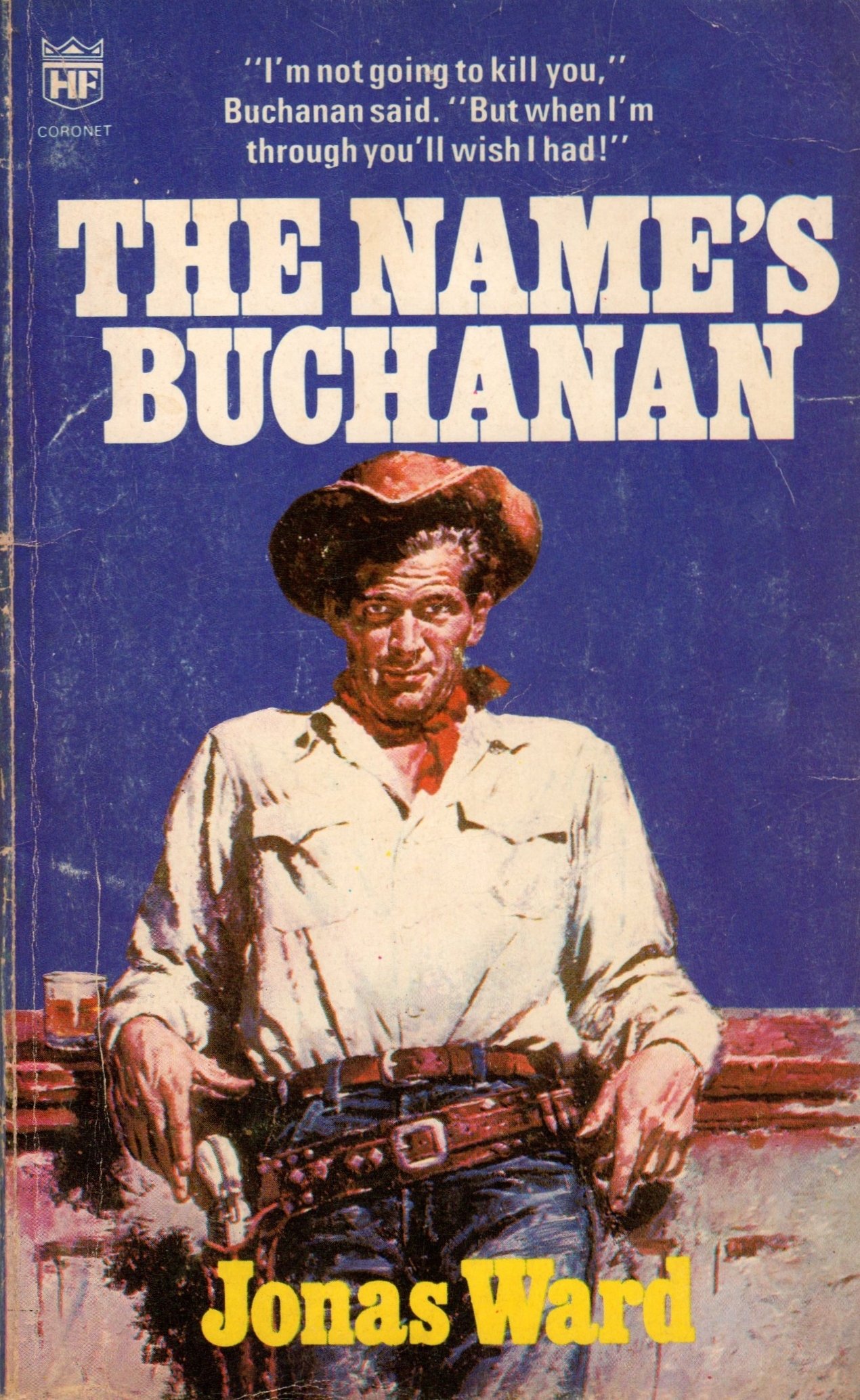 Texan Tom Buchanan (Scott) rides in, this time to a border town treed by corrupt brothers, where he is robbed and framed for murder, and he rights wrongs before riding out again. (Sergio Leone must have seen these movies). The happy-go-lucky drifter is returning from mercenary work in Mexico, trying to make a stake to set up his own spread.

There are several bad guys in this one. The place is named Agrytown and the rather repellent Agry family (I suppose Agry is close to angry), led by Judge Simon Agry and corpulent hotelier brother Amos (Tol Avery, in one of only two Westerns he did, and the excellent and unmistakable Peter Whitney) have it sewn up. The judge especially makes a rattler seem benign. He has a ne’er-do-well son, Roy (William Leslie), who clashes with Buchanan.

But there is, once again, a semi-sympathetic bad man, intelligent, hired gun Abe Carbo (Craig Stevens) who is more charming than the others, and good with women, so that you feel Boetticher himself identified with him – this time especially so because Stevens is all decked out in black and looks like a cross between a gunfighter and a matador. He and Buchanan develop a mutual respect, even if they are on opposite sides of the good/bad divide. Abe only appears half-decent, though, because the others are such lowlifes. Stevens, who was Peter Gunn, you will probably remember, didn’t really do Westerns. This was one of only four he appeared in. But he’s quite good in this. He said in an interview that Boetticher built the part up for him on the go because it was too small the way Lang had written it.

Sheriffs are usually corrupt or sadistic. This one, yet another Agry (Barry Kelley, a regular on TV Westerns but I remember him most for his part in The Tall Stranger) is both.

A young LQ Jones plays Pecos, a sympathetic heavy, who identifies with Buchanan because they are both from West Texas. It’s actually a good performance by LQ, and reminds us slightly of Noah Beery’s in Decision.

In fact LQ recalled that Boetticher nagged Randy into doing his own stunts on Buchanan. “Randy had no business doing that, but Budd would talk him into it and off we’d go.” Randy was 60 by then so was no stripling, but he was always fit.

This time the woman, known as KT (Jennifer Holden, who only ever did three movies, billed only eleventh) has a much lower-key part and is by no means central to the action. And there is no ‘secondary’ woman as there had been in Decision – though in the book Buchanan romances a Mexican servant girl, Lilita.

Buchanan forges a friendship with a brutally mistreated Mexican, Juan (Manuel Rojas) and Boetticher is, as usual, clearly on the side of the angels racially.

The plot gets more and more complicated (everyone seems to be double-crossing everyone else) but climaxes in the requisite shoot-out in the main street – a Boetticher invention not in the book. The street looks like the stage in Act V of Hamlet, so many corpses are strewn thereon, before Buchanan continues on his cheery way.

Ironically, the only one of the films to be set in California was the only one not filmed in California. This one was shot in early ‘58 at Old Tucson and has a much more adobe and saguaro look to it than the others. It’s nicely shot in good color by Lucien Ballard, no less, but there are few outdoor scenes. Most of the action happens in town. Or even in jail. Boetticher was at his best with the great outdoors, especially up at Lone Pine. I’ve always been a huge fan of Ballard’s work, especially, of course, The Wild Bunch and True Grit, but also Scott’s last movie, the splendid Ride the High Country.

The title is classically Western, as indeed was that of a later picture in the cycle, Ride Lonesome. What could be more ‘cowboy’ than the lone rider?

Variety was modest in its praise. “It is an honest picture, made with skill and craftsmanship. Scott gives an understated performance.” For my money, it’s better than that. I personally wouldn’t put it up there with The Tall T, Ride Lonesome or Comanche Station, but it’s a damn sight better than many a late-50s Western, and well up there with much of Randolph Scott’s output. It’s highly enjoyable.

Film maker and critic Taylor Hackford has said that these are “Not just action movies; they are thinking Westerns.” Buchanan is, like all of them, short, economical, fast-paced and tightly directed. The pictures are exciting actioners but the actors are strong and the characters develop. They are psychological Westerns too. Dennis Schwartz called it an “absurd but witty minor Western”.

Ben Kenisberg in The New York Times wrote recently, “Tough to the bone, Boetticher’s films were B movies in their day. They are not the most poetic westerns (for that, see My Darling Clementine or nearly any other John Ford outing). But they may be the most archetypal, and watching them in close succession takes you almost over the range of the genre, from a portrait of a righteous lawman to the darker corners of revisionism.”

Robert Nott in his book on Scott’s films says that during a break a fan came up and told Randy it was the happiest day of her life, that she’d always been an admirer. Scott was pleased but the woman rather spoilt it by adding, “I’ve always wanted to meet you, Joel McCrea.” LQ Jones said “That was the first and only time I ever saw Randy get upset.”

Boetticher himself described Buchanan as “one of the lesser films” of the series. It didn’t make serious money in the US, despite its minimal budget of under $350,000 – Harry Joe Brown was on the set constantly carping about expenditure – though it did quite well in Europe, and has since ‘grown’ back in the US too, with many admirers.

It was the last Scott Western presided over by studio boss Harry Cohn, who died that year, and the writing was on the wall. But there were still two more Columbia ones to go. 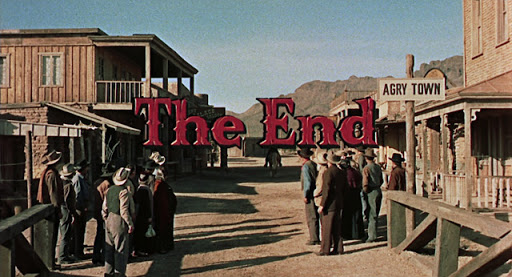 However, for the next in the series, Westbound, it was back to Warners. We shall discuss that another day. For now, happy trails, e-pards.