“The good people in this world are very far from being satisfied with each other and my arms are the best peacemaker.” Samuel Colt.

Guns are intrinsic to the Western. It’s almost impossible to imagine an oater without them. And of all the guns that appeared in movies and novels, the Colt revolver was the most common and the most emblematic. If you’re in a showdown shoot-out on Main Street at sundown, there’s only one pistol for you: the Colt six-gun, preferably a Peacemaker.

In fact, of course, all kinds of handguns, in many different calibers, were used in the West, from American Smith & Wessons and Remingtons to British Webleys and Tranters and French Lefaucheux. The Civil War resulted in huge numbers of firearms from every source flooding in and these were still in use years afterwards.

Samuel Colt (1814 – 62) patented the first practical multiple-shot handgun in 1837 but it wasn’t till the Mexican War at the end of the 1840s that Colt’s introduced the Walker Colt .44. It was fifteen inches long and weighed four and a half pounds. It was barely a handgun at all. You’d certainly need big hands, and a lightning draw from a side holster was out of the question. The Walker and the later Dragoon Colts were horse pistols. As Sam Colt remarked, “It would take a Texan to shoot it.” This is the gun Mattie Ross has in her gunny-sack in True Grit (1969) and which knocks her over backwards when she fires it.

The first real handgun was the 1851 Colt Navy .36 caliber. It was the pistol favored by Wild Bill Hickok and Jesse James. This revolver used cartridges made of nitrated paper, a pre-measured black powder charge, and either a round lead ball or conical bullet.

The Colt Peacemaker was introduced in 1873. It had many other names: the Model P, the Single Action Army, M1873, SAA and Colt .45. It was a single action revolver (in other words you had to cock the hammer with your thumb before each shot) with a revolving cylinder taking six metallic cartridges. It was the standard military sidearm until 1892. Reliable, easy to clean and maintain (guns firing black powder cartridges required a lot of cleaning), not too heavy (just over two pounds), it was a practical and almost ubiquitous weapon. Above all, it took store-bought, ready-made cartridges.

Civil War revolvers had been cap-and-ball weapons. They were revolving, and thus repeating pistols but each round had to be prepared with powder and ball, and a percussion cap fitted before the gun was ready to fire. They took an age to load, which was why cavalrymen (on both sides) often carried many pistols. A shell belt with a holster on each hip and a shoulder harness with two more guns under the arms was quite common. Think of Josey Wales.

From 1873 on, however, you could buy a box of shells and just feed them in the gate. And the round-nosed 255-grain lead bullet with 40 grains of black powder packed a real kick.

This system of rear-loading metallic cartridges had been an idea of Rollin White, who had worked for Samuel Colt in the early 1850s, but, when Colt rejected the project out of hand, White did a deal with Smith& Wesson and kept the patent. It was not until 1871 that Colt’s could produce a similar weapon.

You could buy the Peacemaker in 4¾”, 5½” as well as the Cavalry standard, original 7½” barrels. A longer-barreled version might be slightly more accurate while a shorter one was quicker to pull. A standard Peacemaker would cost you $17 by mail order.

The Colt .45 was a six shooter but normally only five bullets were loaded. There was no safety catch so the hammer rested on an empty chamber. That way, if the gun were dropped or the hammer accidentally struck, no live round would fire: the hammer had to be cocked to turn the chamber and fire a bullet.

Wyatt Earp had (so legend says) a long-barreled version known as the Buntline Special. We shall soon be looking at this peculiar gun. 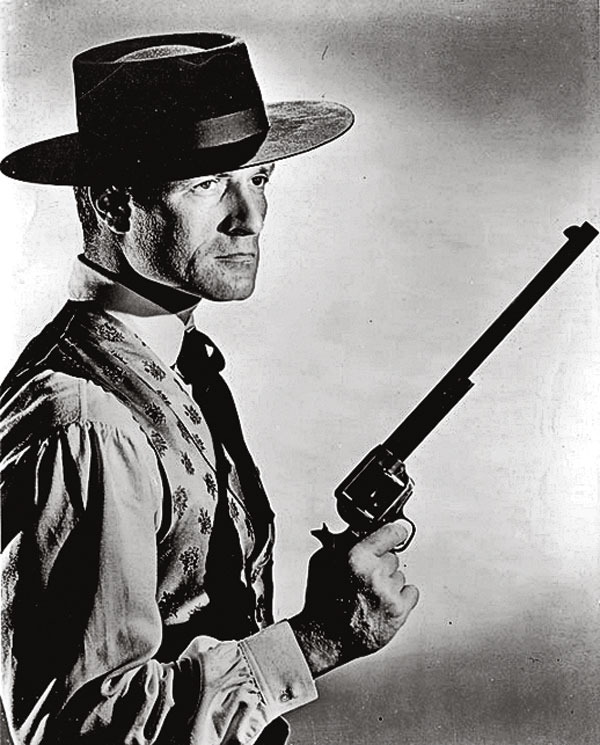 The Colt .45 is what Gary Cooper uses in High Noon and countless cowboys fire in Western after Western. Even, unfortunately, in movies set before 1873, Hollywood not always being known for its scrupulous attention to period detail. 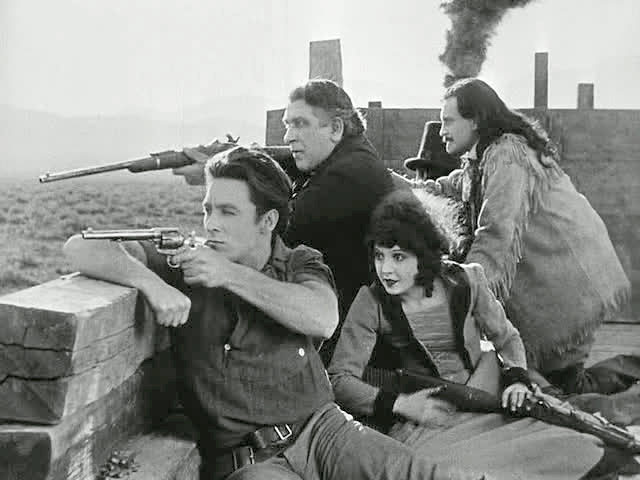 John Ford boasted of the authenticity of his Westerns and a prologue to The Iron Horse said, “Accurate and faithful in every particular of fact and atmosphere is this pictorial history of the building of the first transcontinental railroad” but it didn’t stop him using 1870s Colts in an 1860s story.

In fact, despite the fame of the Colt .45, much more convenient if you owned a pistol and a Winchester ’73 rifle, or later an 1892 Winchester, which many did, was the Colt Frontier or ‘Frontier Six-Shooter’, which was a Colt’s 1873 model chambered for a .44-40 round, a cartridge which was accepted by both handgun and rifle. The Frontier was manufactured from 1877 on and this Colt .44 was very widely used.

These guns were, of course, hopelessly inaccurate at anything beyond a few paces’ range. While there were marksmen (and women) who could hit targets consistently, most people were very unlikely even to hit a man they shot at, never mind kill him. Death might result from later blood poisoning or other complications if a person were hit, the standards of medicine and surgery being what they were, but it was rare for someone to be shot and killed outright by a handgun. Of course, despite what Western movies show, it was rare for these weapons to be fired at all. Drovers carried pistols on their hips against rattlers or other dangers but stand-up one-to-one gunfights in the street were almost unknown. Sorry to disappoint you.

In 1950 Warner Brothers brought out Colt .45, in which Randolph Scott was the Colt Firearms Company’s agent. He has two new forty-fives stolen by evil Zachary Scott and used for nefarious purposes, so Randy has to get them back at all costs. It’s actually a lot of fun as a Western, though it’s nonsense as far as the Colt .45 is concerned: it is set just after the Mexican War and there was no Peacemaker then. If you’re going to make a movie about the .45 it might be slightly better to set it when such a gun existed… Oh well. When ABC aired a TV series of the same name, Colt .45, the movie was rebranded Thundercloud.

In the TV show, which ran from 1957 to 1960, Christopher Colt (Wayde Preston) was a government agent under cover of his arms sales activities. Later, Preston left the series and we had Sam Colt Jr, his cousin (Donald May). The ratings sagged and the series was eventually dropped. There’s an episode of Maverick in which Bart Maverick comes upon Christopher Colt’s sales satchel, abandoned in a room and covered with dust since the series had been canceled the previous season. Quite a good joke.

There had been early double-action revolvers, even in the Civil War, such as a Tranter model, but they were rare. Colt introduced one in 1877, sold in .38 and .41 calibers, and from 1878 .45, so that classified as a Colt .45, but the first such handguns were unreliable and disliked by many, and it wasn’t till the 1890s that double-actions became widespread. Partly because fewer Westerns were set at this later time, you rarely see such guns in oaters. The single-action .45 remained the weapon of choice on the silver screen.

Then in the new century there were the first Colt .45 automatics, but they weren’t Western at all, The Wild Bunch notwithstanding.

There are any number of movies about the Colt in some way or other. Spaghetti westerns in particular loved the name. La Colt era il suo Dio, for example, Reverendo Colt, or Una Colt in mano del Diavolo, that kind of thing. All junk, of course. 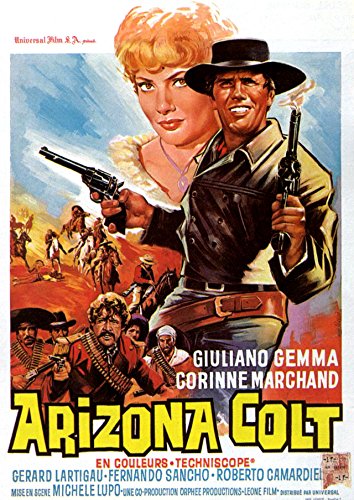 Still, the Colt .45 is the gun of the West. Even when you see a modern one you think of cowboys.

The law of the Remington? I don’t think so.

We’ll be looking at other emblematic firearms in the future, weapons without which the Western would be hard to imagine, such as the Buntline Special mentioned above, Jeff’s beloved derringer, the Winchester, the Sharps, and so on, as well as some more unusual guns featured now and then. So keep on coming back!