A rather ordinary cavalry Western

“A listless and shabby insult to a splendid book.” (Brian Garfield). Well, that may be a bit harsh. The picture has its plus points: some nice Utah locations (standing in for Dakota Territory) shot in Technicolor by Wilfrid M Cline, for one thing, and then a big budget, secured by producer William Cagney, a score by Dimitri Tiomkin, some fine character actors in support and the very beautiful (if extremely posh) Helena Carter as female lead. 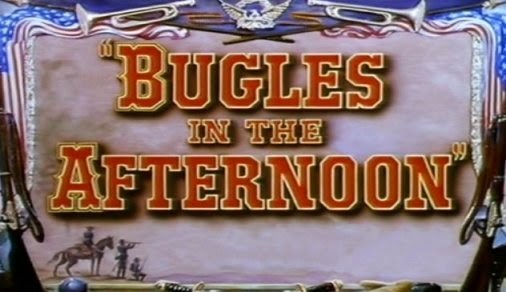 But yes, overall it is a bit of a clunker. That is chiefly because it never recovers from the fatal miscasting of Brit Ray Milland in the lead. Welshman Milland could do smooth urbanite with aplomb but he was, I think, no good in tough-guy roles. He was fine blackmailing a Cambridge pal into murdering his wife or winning an Oscar for Billy Wilder but of course big studios in the 1950s had to use him in war films and Westerns; those genres were de rigueur and every star, sophisticated or not, had to climb into the saddle at one point or another. Milland got away with the pot-boiler California with Barbara Stanwyck in 1947 because that was only a semi-Western, more a costume drama. He was no good with Hedy Lamarr in the John Farrow-directed Copper Canyon in 1950, and Bugles was his third oater. His best effort was A Man Alone in 1955 but even there he didn’t really convince. Apart from hosting a few Death Valley Days episodes and doing a couple of late TV movies, that was where he left Westerns, and probably a good thing too. In Bugles he convinces for the first thirty seconds as the cashiered officer but as he goes West and enlists as a private, beats Forrest Tucker in a fistfight and is promoted sergeant, he is simply unbelievable. The film is sunk in the first reel.

It’s a peripheral Custer story. Like Lippert’s low-budget but rather classy Little Big Horn of the previous year, it is set at the time and in the territory of the 1876 military fiasco, and a bit like Randolph Scott’s post-Little Big Horn story in 7th Cavalry, Bugles in the Afternoon – the film and Bugles in the Afternoon, the Ernest Haycox novel – are not directly about the famous last stand. Custer appears briefly and rather colorlessly, impersonated by Sheb Wooley (it’s barely a speaking part). General Terry, Major Reno and Captain Benteen (all nonentity actors, or nonentities in the script, I should say) also make fleeting appearances.

The real action of the movie, though, concerns a triangular relationship between the noble hero Kern Shafter (Milland) and the odious Captain Garnett (an excellent Hugh Marlowe), two men who hate each other (for Garnett was responsible for Shafter’s unfair dismissal from the Army) and the woman they both love, Josephine Russell (Carter). The outcome is thoroughly predictable: it is absolutely obvious from the first ten minutes of the movie (no spoiler here) that Garnett will be unmasked as a cad and Shafter will be reinstated and get the girl. Boring, frankly.

Warners got Roy Rowland to direct. He had started as a flunky at MGM and married Louis Mayer’s niece. Curiously, he was then promoted. He was OK at crime dramas (e.g. Rogue Cop) and he later directed Stewart Granger (another upper-class Brit) in a modest Western, Gun Glory. Later still he directed some Western TV shows and some Italian ‘westerns’, so he totted up a total of 50 oaters one way or another, but still, you wouldn’t call him a specialist. The pace of Bugles is alright, though the love-triangle plot perforce slows the action down.

Daniel Mainwaring (as Geoffrey Homes) and Harry Brown adapted the Haycox novel (perhaps Haycox’s finest) into a screenplay. They were both novelists (Mainwaring specializing in hard-boiled crime pulp) but again, neither was what you would call a Western expert. Brown did later work on El Dorado, but that rather proves the point…

Hugh Marlowe should have done more Westerns. He was terrific in the few he made, notably in the underrated but powerful noir Rawhide in 1951, his first. The Jacques Tourneur-directed semi-Western Way of a Gaucho followed, then Bugles. He was good later in Garden of Evil with Gary Cooper and appeared in a few Western TV shows but he was very strong in oaters and he is excellent here as the evil nemesis of Milland.

Tucker is excellent (he always was) as the once sergeant, now private who at first resents, then bonds with the new sergeant (Milland). His death is noble and heroic. I wish these actors would avoid ‘Irish’ accents, though. That part is mostly Tucker, not Haycox.

Good old Barton MacLane is the sympathetic officer friend of the hero, James Millican pops up as a sergeant and I spotted John Doucette in a bit part as a tough barman. Bob Steele the Great is listed as ‘horseman’ but I didn’t spot him, dammit.

The critical reception was less than ecstatic. The New York Times opined, “Ray Milland, some cavalrymen colleagues and hordes of yowling Indians are kicking up a lot of Technicolored dust in Bugles in the Afternoon, at the Warner, but not enough, unfortunately, to hide it” and said that the picture was “a rickety and transparent effort to streamline a familiar format of Indian hunting and barracks bickering into a quality Western.” Further, “an already time-worn tale, has been poked along with such leaden pretentiousness by director Roy Rowland, that this film should be given back to the Indians.” Ouch.

Still, although far from a great Western, this one repays at least one watch maybe and has its points here and there. All in all, though, you’d be better off reading the book.

PrevPreviousBugles in the Afternoon by Ernest Haycox
NextThe Mandalorian (Disney, 2010)Next

PrevPreviousBugles in the Afternoon by Ernest Haycox
NextThe Mandalorian (Disney, 2010)Next
Jeff Arnold © 2022 – All rights reserved – Designed by BetterCallChris
Scroll Up