Billy the Kid in fact and fiction 6

With Alexander McSween dead and James Dolan bankrupt, there was nothing left to fight over, and the Lincoln County War cooled with the ashes of the McSween house. The Regulators stayed together for a bit, more out of comradeship than from any set purpose. They met up with a Chisum herd going north; John Chisum wasn’t with it but his brothers were, and so was Sallie. This was the last time she and “Willie”, as she called him in her diary, would meet. Then the band hung around Fort Sumner for a bit. But little by little they broke up. The Coe brothers left first, to go back to peaceful farming, then Doc Scurlock, who wanted to be with his family, and Charlie Bowdre, who was in love with his wife Manuela, took employment from Pete Maxwell and left too. The Regulators were down to five: O’Folliard, Brown, Waite, Middleton and their new leader, Billy Bonney.

They stole some horses and moved into the Texas Panhandle to sell them. At Tascosa, Billy made friends with Henry Hoyt, later a distinguished medical practitioner, who left a highly entertaining memoir, Frontier Doctor, which I can certainly recommend to you. Hoyt says of Billy that “although only a beardless boy, [he] was nevertheless a natural leader of men.” Hoyt tells how they engaged in a running race, how Hoyt gave Billy a Winchester and Billy gave Hoyt a horse. Billy wrote out a bill of sale for it, so we have an example of his handwriting, and rather elegant it is too. 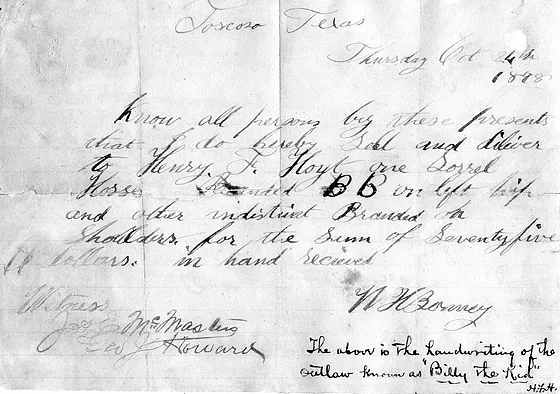 Billy insisted on going back to New Mexico but John Middleton, Fred Waite and Henry Brown thought it too dangerous, and now they left too. Only the ever-loyal Tom O’Folliard stayed with Billy. The Regulators were no more.

It was risky to go back but Billy told several people that he had had enough of being on the run. He wanted to settle down. No one else had been successfully prosecuted for Lincoln County indiscretions; why should he be? It was perhaps naïve.

Sue McSween was back in Lincoln, with an excitable one-armed lawyer, Huston Chapman, determined to bring Colonel Dudley to justice for his disgraceful actions, and indeed a military inquiry was convened to hear the case against Dudley. There were other hopeful signs. President Hayes got rid of Governor Axtell and replaced him with Civil War veteran Lew Wallace, who issued a general pardon – except for those specifically indicted, and that included Bonney. The pro-House Sheriff Peppin failed to get re-elected and was succeeded by George Kimball, who seemed competent. And Billy met with Dolan and negotiated a truce. No one on either side would kill anyone on the other, and no one would testify against any other in court. It seemed that peace and quiet was at least a possibility.

It wasn’t. Straight away the agreeing parties decided to celebrate their pact, wildly. Bonney, cold sober, watched as they bumped into the lawyer Chapman, drunkenly assaulted him and, either accidentally or not, fired a shot into his chest, killing him and setting his clothes afire. They left the body burning in the street and retired to a cantina. Billy slipped away.

Many, including the disgracefully partial Judge Bristol and the frankly vicious DA William Rynerson, who was almost seven feet tall, thought Bonney guilty of murdering Chapman, though he was not. But it was yet another crime laid at his feet.

On March 5, Governor Wallace came to Lincoln. He got rid of the troublesome Colonel Dudley, so that was good, but he especially wanted those responsible for the Chapman killing indicted and arrested. The new commander at Fort Stanton, Captain Carroll, began diligently to round up suspects.

Billy now shrewdly wrote to the governor, offering to testify against Dolan as a witness to the killing of Chapman – thus breaking the recent agreement he had made with Dolan – in return for immunity from prosecution. Wallace agreed to meet him and replied saying, “I have authority to exempt you from prosecution if you will testify to what you say you know.” Actually, Wallace did not have that authority. He could grant a pardon, but not immunity. If the DA prosecuted and the judge convicted, he could only pardon after the event. During the night of March 15, at the home of Squire Wilson, JP, governor and outlaw talked. Wallace told Bonney now that he would grant “a pardon for all your misdeeds”. Bonney agreed.

It was this famous bargain that Governor Wallace never did keep. Bonney did testify against Dolan, before the reprehensible Judge Bristol, and also at the military inquiry against Dudley (who would be exonerated) but no pardon was forthcoming. Bristol and DA Rynerson were absolutely determined to have him hanged for murder. On the night of June 17, 1879, Billy simply rode out of Lincoln, with, doubtless, a deep feeling of betrayal.

Wallace had anyway got bored of the troublesome small town and returned to Santa Fe to resume writing his beloved and soon to be published work Ben-Hur. 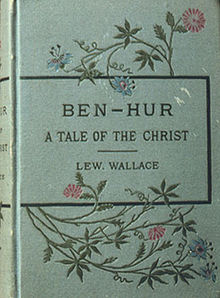 Billy spent the next few weeks in Las Vegas, a boomtown now that the railroad had just arrived, and there he bumped into Henry Hoyt again. Remarkably, Hoyt records how, at a spa hotel out of town, Billy met up with a certain Mr Howard who was none other than an incognito Jesse James. It seems too good to be true, but it could be true.

By August Billy was back in Lincoln. It seemed he couldn’t keep away. Sheriff Kimball, quite sympathetic to Billy, nevertheless arrested him but later reported, “He escaped by climbing up a chimney, leaving his arms behind, and escaping under cover of night.” Assiduous readers of our blogposts in recent days will remember how Billy did exactly that back in Silver City in his early days of crime.

What now for Billy?

Well, click on your doubtless bookmarked Jeff Arnold’s West tomorrow and you shall learn!