Another so-so Billy from Metro

As we have seen, MGM made the first talkie Billy the Kid movie, in 1930. It wasn’t very good, in fact, with stodgy writing, lackluster casting and iffy acting. Click here for our review of that. Still, it was a big-budget affair, and Metro must have regretted that because it was released just as the Depression hit, audiences evaporated and the picture lost money. And with the occasional exception, the major-studio A-picture Western simply didn’t happen for nearly all the decade of the 30s.

In 1939, though, most of the majors came out with big-picture oaters again. Fox started it by putting its top star Tyrone Power in a Technicolor Jesse James. John Ford made Stagecoach. Warners paired Errol Flynn and Olivia de Havilland in their color Dodge City. Paramount put Joel McCrea and Barbara Stanwyck in Cecil B DeMille’s Union Pacific. And Universal had Marlene Dietrich and James Stewart in Destry Rides Again. Only MGM missed the boat. They ran into major problems and delays with their expensive Northwest Passage project, which wasn’t released till 1940 and, barely a Western, was a really weak film too. So Metro was due a big saddle-and-sagebrush picture, and finally got it when they cast one of their top stars in a remake of their 1930 picture, Billy the Kid. 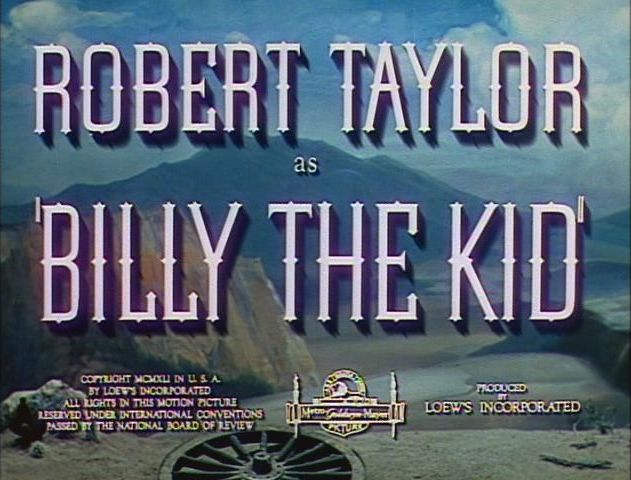 It was a remake, in the sense that it too was based on the extremely dubious Walter Noble Burns book The Saga of Billy the Kid (1925), as sensational and lurid as it was historical bunkum. The ’41 film was written by Gene Fowler, from a story by Howard Emmett Rogers and Bradbury Foote, borrowing quite a lot from the 1930 script. And the 1941 attempt rehearsed many of the clichés and falsehoods of the earlier version.

There is a store owner in Lincoln this time named Hickey (Gene Lockart, hitherto only small parts in two low-budget Westerns) who is presumably meant to be a kind of Dolan or LG Murphy, and an English rancher, the Tunstall figure, named Keating now (Ian Hunter, no other Westerns). As had already become standard in movie Billy stories, the English rancher is a pacifist no-gun older guy (Hunter was 41) and the store owner is the violent crook. In reality, as we know, Tunstall was barely older than Billy himself and there was little to choose between the equally obnoxious (and equally incompetent) factions, but movie versions always show Tunstall & Co as the goodies and the Dolan/Murphy clique as the villains. Tunstall is always Billy’s avuncular mentor (he wasn’t).

Some elements of the fact or the known legend are incorporated: Billy likes Mexicans – he is first seen breaking his pal Pedro (Frank Puglia) out of jail – he is left handed (Billy wasn’t but legend insists), he takes the bullets out of an opponent’s gun, and he kills a lawman while escaping from jail in Lincoln. But these are little more than allusions really and this version again plays fast and loose with both history and legend.

Rancher Keating conveniently has a beautiful sister for Billy to woo (it was to have been Maureen O’Sullivan but she couldn’t so the part went to Mary Howard, whose only Western credentials are this and a Purple Sage the same year), though she is engaged to US Marshal Jim Sherwood (Brian Donlevy). And here we come to a major weakness of this movie. Donlevy was rarely convincing as a Westerner. He was, for instance, poor as Grat Dalton in 1940 in When the Daltons Rode and he was a perhaps the worst ever Trampas in the post-war The Virginian. At a push he was OK as a tough caddish-mustached heavy in a suit in a saloon (for example, Kent in Destry Rides Again) but he couldn’t handle the tough ranch foreman/cow-puncher role he has here. He has a major part as Billy’s childhood friend and adult conscience. He is the nearest the movie has to a Pat Garrett figure.

And to be blunt, even Robert Taylor himself as Billy wasn’t all that good. For one thing, he was in his thirties and looked older, and he was simply miscast as the adolescent killer. It’s just plain odd when the cast refer to him as “Kid”. Many screen Billies were far too old. I like Robert Taylor in Westerns, and he would later do some very good ones, but he wasn’t right for this part, effectively his first oater (unless you count Stand Up and Fight). Taylor was desperate to diversify and loved Westerns. He begged for this role. He was a fine horseman, as he demonstrates in Billy the Kid, although there are also a lot of those annoying actors-on-false-horse-in-the-studio shots while stuntmen actually ride through the stampede. 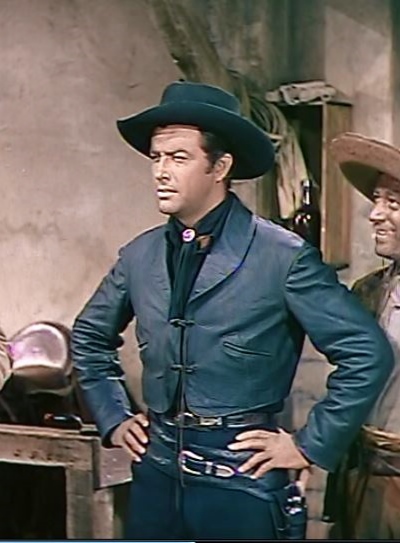 Right-handed Taylor spent weeks perfecting his ability to draw a gun with his left hand in preparation for the film. It was still believed at the time that Billy was left-handed. And in fact in the ending they cooked up, Donlevy and Billy draw against each other but Billy deliberately draws with his right hand instead, to avoid killing his friend, and dies with a smile on his face, in Donlevy’s arms, boo hoo. 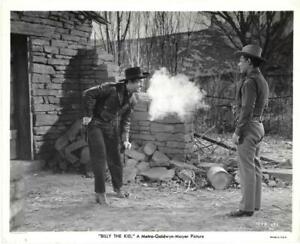 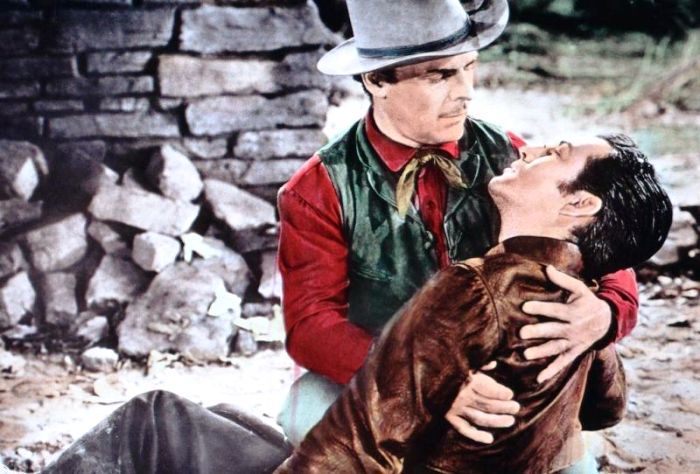 The screen hero couldn’t be a villain so a backstory is invented to justify Billy’s career: a “rat” shot Billy’s pa in the back in Silver City (as happened in the 1930 version) so he gunned the man down and “drifted” down to Lincoln (cowboys always have to drift, they can’t travel). This is presumably a kind of reference to McCarty/Bonney’s murder of the bully Windy Cahill.Evil Hickey’s men shoot Keating in the back, and he is unarmed, as the legend requires, although of course there is no evidence whatsoever that Tunstall was averse to guns – au contraire.There are some good features of the movie, though. For one thing the locations are great. Lincoln looks nice and there’s a lot of Arizona and saguaros, round Flagstaff, Tucson and Sedona. There’s also a good bit of Monument Valley. And of course it’s in Technicolor. The scenes when Donlevy, on shining white charger, and Billy in black on a glistening black stallion, ride round the ranches gathering a posse are really good. So full marks to cinematographers William V Skall (The Return of Frank James) and Leonard Smith (Go West) – and indeed, they were Oscar nominated for it.

Bosley Crowther in The New York Times praised the photography and the scenery but added, “The scenery is by far the most spectacular part of this bulging film. For, in spite of its elaborate coloring and its highly reputed star, Billy the Kid is just another routine horse opera—another glorified fable about one of the West’s more notorious outlaws—and not a very good one at that.”

As for the directors, the AFI Catalog tells us that “when Billy the Kid began filming in mid-December 1940, Frank Borzage, two-time Best Director Oscar winner, was the director and his brother Lew was the assistant director. According to HR [Hollywood Reporter] production charts and news items, Borzage directed portions of the film that were shot on location in Tucson and Flagstaff, AZ. A HR news item on 13 Jan 1941 reported that Borzage was being taken off the production and reassigned to a Joan Crawford project [that] was never made. At that time, David Miller was assigned to direct Billy the Kid.” This was Miller’s first Western, indeed first movie as director, but he later did the lovely Lonely Are the Brave. It was Borzage’s last Western; he’d done a lot of silents. Apparently also veteran Metro director Norman Taurog acted as a “supervisor” for Miller during some of the production because Miller was a tyro.

Of the other actors, Puglia as comic-relief Mexican Pedro sings well. Chill Wills (in his late 30s) has a small part as the decent top hand shot by bad guy Hickey’s men during a stampede, whose last words to his loving wife are “Tell the kids…uh.” And Guinn ‘Big Boy’ Williams is amusing as the dumb blacksmith Ed Bronson. You can also spot Lon Chaney Jr, Grant Withers, Kermit Maynard, and Ray Teal.There are a couple of shots of gunmen in town framed by broken windows which make me wonder if Floyd Crosby had seen this movie when he photographed High Noon.

The David Snell score is routine.

Veteran cowboy star William S Hart had coached the 1930 Billy, Johnny Mack Brown, and had let him use his proudest possession, Billy the Kid’s gun. He tried the same on Taylor in late 1940 (Hart didn’t die till 1946). The gun had the front sight filed down “for a faster draw”. Sadly, though, it later proved that it wasn’t Bonney’s gun at all. Poor Hart had been conned by the seller.

The movie was not passed by the Swedish censors. I can’t for the life of me see why not. It is frankly tame, even by 1941 standards. Unless they didn’t like the political message: this movie was made in 1940 and came out in ’41. Mass murder was taking place in Europe but in this film American law and order was coming to the frontier. Sounds a bit far-fetched, doesn’t it. They certainly can’t have objected to the sex. There wasn’t any. 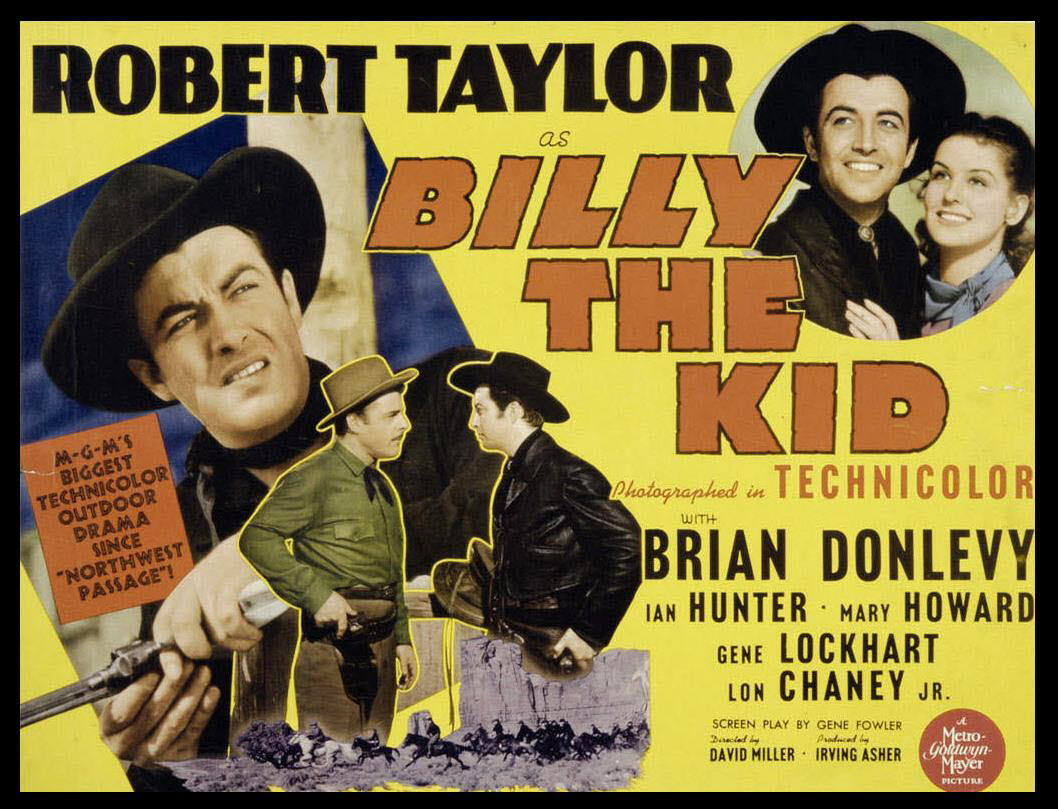 According to MGM records the film earned $1.5m in the US and Canada on its $1.4m budget, so barely made a profit. That was at least better than the quite heavy losses made by the 1930 one.Well, anyone interested in Billy the Kid (that’s everyone, isn’t it?) has to see it. And it’s not a clunker. But really it’s a bit of a plodder – Brian Garfield called it a “sad second-rate remake” – and a bit on the ordinary side. Also miscast.

At the same time as MGM was filming Billy the Kid, another crew was shooting a Billy the Kid picture. This movie wouldn’t be released until 1943, and would turn out to be not only the worst Billy the Kid movie ever but also one of the most dreadful Hollywood pictures ever made. But for your Jeff to tear into that monstrosity you’ll have to wait till next time.

Until then, sayonara, cowpokes.