One of the better Billies

After a flurry of Billy the Kid movies in the early 1970s (Chisum, Dirty Little Billy and Pat Garrett & Billy the Kid – click the links for our review of those) there was a Billy pause for a bit, with just the odd TV documentary or what-have-you. But at the end of the 1980s the New Mexico delinquent re-emerged on the screen. It seems that every generation has to make a Billy movie, just as Zorro, Robin Hood, Jesse James, the Three Musketeers and other characters can never rest easy in their graves; they must always be resurrected. Anyway, between the 80s brat-pack Westerns Young Guns and Young Guns II, which we’ll be reviewing next, came a TV movie Billy the Kid, and that is our subject for today.

Gore Vidal had written a TV play back in 1955, The Death of Billy the Kid, which NBC had screened. It starred Paul Newman as Billy and Frank Overton as Pat Garrett (with Jason Robards as Joe Grant). Three years later this came to the big screen when Warner Brothers released The Left Handed Gun, again with Newman in the lead, Arthur Penn’s first feature as director. But Vidal didn’t care for that picture at all (he described it as “a film only someone French could like”) and he objected to the alterations to the script that writer Leslie Stevens made. Vidal always harbored a desire to have a screen version of his play done more to his liking. And in 1989 he finally got it, when TNT aired a 96-minute TV movie, with Val Kilmer as Billy. 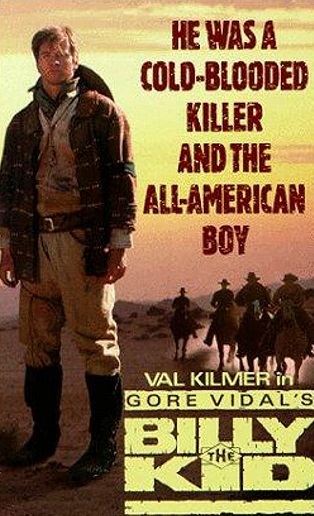 Mr Kilmer was only just in his twenties still and so follows in a long tradition of ever so slightly long-in-the-tooth Billies but he did at least look youthful. He also tried to resemble Billy, as far as we know what he looked like. At one point in the film he wears those bulky clothes and squished hat that we recognize from the famous tintype. Kilmer doesn’t manage the buck teeth, though. It was his first Western. Four years later he was to be an outstandingly good Doc Holliday in Tombstone. He had a small part in The Missing, which he supported, in 2003; he was Inish Scull in the TV Comanche Moon the same year; and he played an elderly Wyatt Earp in Wyatt Earp’s Revenge in 2012. He makes a pretty good Billy, I think, and manages to capture the probable juvenile irresponsibility of the fellow, with a sly intelligence and violence lurking just below the surface. 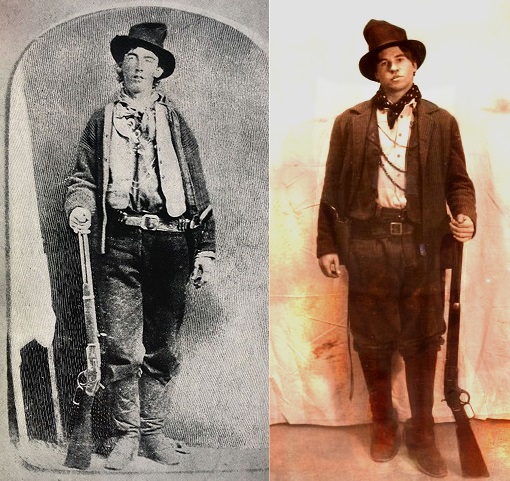 This Billy the Kid is definitely one of the more faithful and factual non-documentary Billy films. Not that we watch Western movies for a history lesson. But still, it’s nice occasionally to believe that what we are seeing is at least closer to the truth than we have been used to.

Having said that, don’t believe all you see. Vidal seems to have drunk at the fountain of American legend quite deeply, and was probably influenced by the 1920s Walter Noble Burns book The Saga of Billy the Kid, as well as the early MGM movies in 1930 and 1941. I say this because many of the myths evident in those accounts are still firmly in place in his own.

For example, Tunstall is a no-gun man, as he is nearly always shown. In fact Tunstall had nothing against firearms at all and he was far from the noble mentor of the young Bonney he is usually shown as. This version’s Tunstall was Englishman Andrew Bicknell, then 32, so that was better than many of the old guys who played him – the real Tunstall was 24 when he was killed, barely older than Bonney himself.

“Dolan has taken my store, now he wants my ranch,” Tunstall complains. Films need goodies and baddies and the Tunstall/Bonney faction is always shown as a brotherhood of put-upon honest ranchers fighting the corrupt corporate oppression of “the House” with its powerful Santa Fe connections. In fact there was little to choose between the sides, both being greedy, grasping and lawless. They both wanted a monopoly so they could exploit the locals.

In this film Sheriff Brady (Jack Dunlap) himself shoots the unarmed Tunstall down in cold blood, with Billy as witness, and Billy decides to kill Brady in revenge, which he does just with his pal Tom (Patrick Massett). This is at best a liberal interpretation of the facts, and at worst a distortion. Never mind; as I said, we don’t watch Westerns for a history lesson.

Wilford Brimley does a convincing Governor Lew Wallace. Mr Brimley was in 23 film and TV Westerns over a forty-year period, starting with Bandolero! in 1968 and the John Wayne True Grit in ’69, and he is always a pleasure to see. His Wallace occupies himself with his novel Ben-Hur (which the real Wallace did) and is rather dithery about what to do with the Kid, and Lincoln County lawlessness generally (which Wallace was).

Duncan Regehr is Pat Garrett and he too tries hard for the look, though not altogether successfully. So much is known about Garrett’s pursuit and execution of William Bonney (partly because he wrote about it himself), and the boy’s later life is known in some detail, yet we know precious little of his early years. Legend has it, and many Billy movies play on this, that Pat and Billy were old friends, even perhaps on the shadier side of the law, but there is no hard evidence for such a companionship and anyway Billy would have been just a child. But writers and film makers have license. Certainly it enhances the plot dramatically.

We are told that Pat Garrett has bought Beaver Smith’s saloon in Fort Sumner. The ambush in which Tom O’Folliard is killed takes place not at Fort Sumner but out in the country. The outlaws hole up not in a rock house at Stinking Springs but, as usual in movies, in a cabin. Once captured, Billy is taken straight to Lincoln for trial, not to Las Vegas and then Santa Fe. Well, it’s fair enough. They have to telescope events in a 96-minute video.

According to Vidal, it’s the father of Billy’s girlfriend who hides a pistol in the outhouse to enable Billy to escape. Surprisingly, we don’t see Billy shoot Bell and Ollinger; we just see the bodies. This girl, Celsa (Julie Carmen), is the sister of Pat Garrett’s new wife, so Pat and Billy are brothers-in-law in an informal way. That was true: Celsa Gutierrez was Pat’s wife’s sister.

Albert Salmi is rather good as Pete Maxwell and Gore Vidal himself appears briefly as a preacher. Rene Auberjonois is a pro-Billy drunk who eventually turns Judas by telling Pat where he can find Billy. Well, it could have happened, I suppose.

It ends with Pat weeping over the corpse of the young Billy as it is carried to church.

The film was directed by William A Graham (1926 – 2013) who had helmed a fair few TV Western shows and made-for-TV movies (such as The Last Days of Frank and Jesse James). Billy the Kid is quite well done, though of course it’s hard to build too much tension when we all know so well what the outcome will be.

Much is sometimes made of the homoerotic tints of this film. Call me obtuse but I didn’t see any suggestion of a Pat/Billy relationship in that sense. Garrett was a twice-married father of many children, and a loyal, decent husband, and Billy was famously fond of dallying with the Mexican-American girls, so it’s hard to see the sheriff and the outlaw as a pair of gay lovers, suppressed urges or not.

All in all, this is one of the better Billy movies and it is certainly classier than most. Kilmer’s Billy is much more convincing than Kristofferson’s bulky hard-boiled type or Newman crying to the sky in a frenzy of overdone method acting.

What’s more, Billy even has a derringer.

So yes, Jeff Arnold’s West can recommend a viewing.