You might expect a mid-50s Universal movie about Crazy Horse to center on Little Bighorn but in fact Custer didn’t appear. The senior cavalry commander in this one was General Crook – played by James Millican, Custer in the 1951 picture Warpath which we reviewed the other day (click the link for that).

Still, I’m going to review Chief Crazy Horse anyway, in the midst of our Custer season, because Crazy Horse was such a key figure for Custerologists. Indeed, played by Anthony Quinn, he was Custer’s chief foe in probably the most famous Custer movie, They Died With Their Boots On (click again for that review). 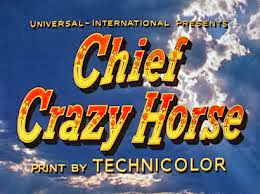 In the 1950s Universal made wagonloads of sub-Broken Arrow broadly pro-Indian Westerns. Many of them started with a statement on the opening screen that ‘this was the way it really happened’, ‘this story is based on true historical fact’, and so on, which if you believed, you had an IQ smaller than your cowboy boot size. They usually featured a brave, resourceful Army officer or scout (Jeff Chandler, for example) who, despite the bull-headed approach of political commissioner/by-the-book senior Army officer/evil rogue out for his own ends, manages to bring peace to the frontier by doing a deal with a statesmanlike Indian chief. That was the plot.

If you want to get an idea of what I mean, watch Tomahawk, The Battle at Apache Pass, Pillars of the Sky or several others.

So when you settle down to watch Chief Crazy Horse, a Universal offering starring Victor Mature (!), you think yes, well. Mature will be a farsighted Army man, J Carrol Naish or someone will be the chief, and wisdom and statesmanship will finally triumph. It’s Universal, so we’ll get some good photography and nice locations, and we’ll get some decent acting, a solid if unstellar director and maybe an OK script. But that’s about where it’ll end.

Chief Crazy Horse is unusual. It’s actually a biopic of the Oglala leader told from the Indian point of view. And some of it, even down to some of the details, is in fact historically true. Wow.

Tȟašúŋke Witkó, in Standard Lakota Orthography, better known to us as Crazy Horse, was born in about 1840 or possibly 1845. His father was an Oglala and his mother was a Miniconjou. As a boy he witnessed the death of Conquering Bear, who prophesied that he would become a great chief, and saw visions which indicated the same thing. This is represented in the movie. In the 1850s and 60s his fame as a warrior grew. On December 21, 1866, Crazy Horse and six other warriors, both Lakota and Cheyenne, decoyed Captain William Fetterman’s 53 infantrymen and 27 cavalry troopers under Lieutenant Grummond into an ambush. This action appears in the film. However, in August 1867 he came off worst in the so-called Wagon Box Fight when he ran up against soldiers with breech-loading rifles and lost many men, and this is not shown.

In 1867 he ran off with Black Buffalo Woman, the wife of No Water, and No Water shot him in the face with a pistol, leaving a bad scar. This also is not shown. In 1871 he married Black Shawl, an Oglala and relative of Spotted Tail. They had a daughter who died at the age of two. Black Shawl survived Crazy Horse and died of influenza in 1927.

In the movie Black Shawl was played by Suzan Ball. She was a cousin of Lucille’s and in 1953 had also been an Indian maid in War Arrow with Jeff Chandler. She was better in Chief Crazy Horse than in War Arrow but was really rather unconvincing in both. It was her final movie and in fact her right leg had been amputated five months before filming began in June 1954, and she was now moving with the aid of an artificial limb. She died a few months after the picture was released, aged 21. Any scenes requiring her to take more than a few careful steps were shot using a double, photographed from the rear. But the Crazy Horse/Black Shawl relationship is cheesily and almost embarrassingly badly represented, definitely a weakness of the picture.

The film skates over another relationship Crazy Horse had, with a certain Nellie Larrabee, also known as Chi-Chi and Brown Eyes Woman, described by interpreter/scout William Garnett as “a half-blood, not of the best frontier variety, an invidious and evil woman.”

There is no photograph of Crazy Horse that we are sure of, though one dated 1877 is claimed. A Mormon missionary drew a pencil sketch from a description given by Crazy Horse’s sister and this is about the best likeness we have.

On June 17, 1876, Crazy Horse was one of the leaders of a combined group of approximately 1,500 Lakota and Cheyenne in a surprise attack against General George Crook’s force of 1,000 cavalry and infantry, and allied 300 Crow and Shoshone warriors in the Battle of the Rosebud. The battle, although not substantial in terms of human losses, delayed Crook’s joining with the 7th Cavalry under Custer and therefore possibly contributed to Custer’s subsequent defeat at the Battle of Little Bighorn.

A week later, Custer attacked a large encampment of Sioux and Cheyenne. Custer’s last stand, as it became known, is almost glossed over in Chief Crazy Horse and that is perhaps justified because despite what other Custer movies showed, Crazy Horse’s exact role in the battle is not known. He certainly participated vigorously but what his leadership role consisted of, if any, is not sure.

After Little Bighorn, Crazy Horse’s people struggled through the winter, weakened by hunger and the long cold, graphically shown in the film. Crazy Horse decided to come in with his band to protect them, and went to Fort Robinson in Nebraska in May 1877.Crazy Horse spent four months on the Red Cloud agency. Rumors that he wanted to break out and go back to his old ways were spread by two jealous chiefs, Red Cloud and Spotted Tail. Crazy Horse was arrested and while being taken to the guard house at Fort Robinson, he was stabbed with a bayonet by a guard. In the movie, all this is shown to be the fault of jealous Little Big Man (Ray Danton), a cousin of Crazy Horse (no connection to the Little Big Man of Thomas Berger’s novel and subsequent film), and a rivalry for the hand of Black Shawl is invented to justify it. Little Big Man was present at the death of Crazy Horse. He later claimed that Crazy Horse pulled two knives from under his blanket, one reportedly fashioned from an army bayonet, and held one in each hand. Little Big Man, standing behind him, seized Crazy Horse by both elbows, pulling his arms up behind him. As Crazy Horse struggled, Little Big Man lost his grip on one elbow, and Crazy Horse drove his own knife deep into his own lower back. The guard then stabbed Crazy Horse with his bayonet. The chief fell and surrendered to the guards. So Crazy Horse stabbed himself in the back.

You may believe that if you will.

Unlike many Indian chiefs, Crazy Horse never went to Washington or even rode on a train or ate at a table. He remained true to his ways. He was clearly also a talented guerrilla leader and brave fighter. He is one of the great figures of American history.

The movie doesn’t really do him justice. It was the mid-1950s and Westerns weren’t equipped to do that. Mature, who was so fine as Doc Holliday in My Darling Clementine (click link for review), is faintly ridiculous in the part of Crazy Horse. I’m not sure that the first choice, Jeff Chandler, as the LA Times of the day reported, would have been much better. But according to its lights, the film did try. Even the details: Crazy Horse wore yellow face paint in battle showing jagged lightning; he does in the movie. Someone did some research. And the mere fact that we get a whole life of Crazy Horse in which he is the star and not just a character, is unusual. Of course, there is a white man (John Lund) who narrates and is a friend of the chief, but that is really just a mechanism to tell the story. Lund is not the hero.

It’s shot on location in South Dakota by Harold Lipstein in Technicolor and CinemaScope so the look of it is good.

George Sherman directed. He was a doughty workhorse of the Western genre. It was written by Gerald Drayson Adams, who did several in this sub-genre, such as The Battle at Apache Pass, Taza Son of Cochise, War Drums and Tomahawk Trail.

If you can suspend your credibility a bit and blur your eyes somewhat when looking at Victor Mature and Suzan Ball as Crazy Horse and Black Shawl, you will find Chief Crazy Horse perfectly watchable. At least an American Indian character was center stage.

The New York Times thought the picture was a “handsome and tedious charade” and said it was “just a series of hit-and-holler clashes between the Indians and the United States Cavalry”. It suggested that Mature looked “less like a flesh-and-blood Indian than like one of the cigar-store tribe”.

The film came 71st in Variety’s box-office rankings of 1955, grossing $1.75m. That wasn’t too bad. It outsold Fox’s White Feather, for example, and even did better than Paramount’s The Far Horizons. Though this latter was pretty much a clunker, it was still a big picture, directed by Rudolph Maté and with Fred MacMurray and Charlton Heston, so it might have been expected to do well.

By the way, if you want to know more about Crazy Horse, the most famous book is probably Crazy Horse, the Strange Man of the Oglalas, a biography (1942) by Mari Sandoz. Myself, I found in rather indigestible; it is overlong and goes for the poetic/dramatic style of bio, but if that’s your thing, go for it. Otherwise, Larry McMurtry wrote a short life, Crazy Horse, 1999, which is pretty good. There’s also a book by Russell Freedman, The Life and Death of Crazy Horse, 1995, though I haven’t read it. There is a massive two-vol DVD, The Authorized Biography of Crazy Horse and His Family (2006 and 2007) “based on over 100 hours of footage shot of family oral history detailed interviews and all Crazy Horse sites”. But I think you’d have to be pretty determined to take that on.