Which painting, or its reproduction anyway, has been viewed, commented on and discussed heatedly by more people in the US than any other artwork? This was a question posed by Robert Taft in a 1946 article for the Kansas Historical Society Quarterly (Vol. 14 No. 4, pages 361 to 390, if you’re interested). Willard’s Spirit of ’76 and Washington Crossing the Delaware by Emanuel Leutze might be candidates, but these pale into obscurity beside a work by Cassilly Adams, Custer’s Last Fight. Painted in the mid-1880s, it was lithographed and circulated very widely. In particular, the rights were purchased by the Anheuser-Busch Company of St Louis in 1896 and the image is still distributed by that missionary concern. For a century and a quarter Americans viewed it, often posed over the bar, in countless saloons, taverns and hotels all over the country. Mr Taft reckoned in 1946 that “It is probably safe to say that in the 50 years elapsing since 1896 it has been viewed by a greater number of the lower-browed members of society – and by fewer art critics – than any other picture in American history.” 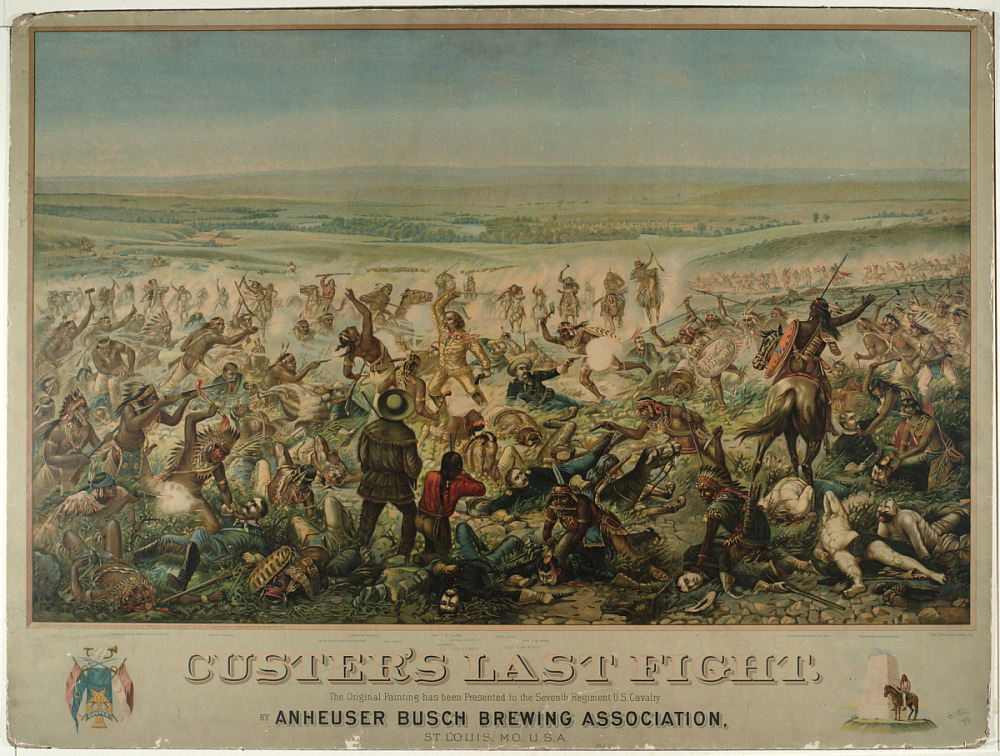 Why? The scene is of course imaginary, for no white witness survived the Custer debacle. And you wouldn’t put it in the Sistine Chapel class as art. No, the reason for the astonishing popularity of this picture is the event itself, the great and, in most people’s eyes, tragic climax of the life of George Armstrong Custer.

It is no accident that the first motion picture (that we know of) featuring Custer, in 1912, bore the painting’s title, Custer’s Last Fight. Huge numbers of Custer movies followed, and are still following – don’t worry, I’m not going to review them all. The soldier has been admired, reviled and mocked in dozens of films, such as the 1914 comedy Colonel Custard’s Last Stand up to The Ridiculous 6 (2015), which has David Spade playing Custer, seen attending a gambling game alongside Mark Twain (portrayed by Vanilla Ice). Actors of the big screen as varied as Francis Ford, Dustin Farnum, Frank McGlynn, Ronald Reagan, Errol Flynn, Douglas Kennedy, Philip Carey, Robert Shaw and Leslie Nielsen, to name but a few, have impersonated the rash/noble/savage/megalomaniac (take your pick) general.

In the 1950s Custer started appearing on TV in a huge variety of documentaries, movies and weekly shows. He even got his own, The Legend of Custer (legend, indeed) on ABC, with Wayne Maunder as the general. All the while, he was figuring on the printed page, in books by the likes of Thomas Berger, Vine Deloira Jr, Michael Blake and many more – and let’s not forget his appearance in the Flashman novels.

Your Jeff hesitates to dip even a toe into the dangerous swamp of Custerology, for there are so many experts out there, who know far more about the man than I ever will and often have very decided opinions, tolerance of contrary views not always being their strongest suit. But hey, we have ventured on Jeff Arnold’s West into the equally controversial worlds of Earpiana, Billy the Kiddery and Jesse Jamesography, so why not have a go at another icon of the Wild West. Eh?

And we’ll start with that first silent movie I mentioned, Custer’s Last Fight. 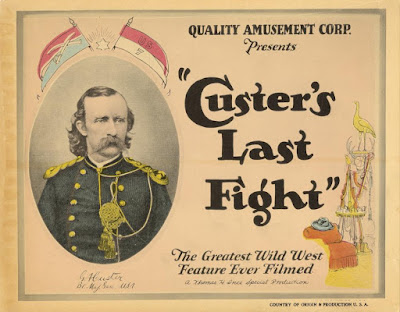 To Francis Ford, John’s elder brother, went the honor of being the very first screen Custer – that we know of anyway – in the production of 1912.

Custer had only been dead 36 years, like 1985 to us today. And the Custer myth, the story of the shining hero who fell valiantly for his country, was very much in full spate. So it was to be expected that the first celluloid Custer would be a gallant soldier, a spotless hero, in fact a martyr. It was so.

Thomas H Ince produced, as the title screen makes clear, and no mention at all is made of Frank Ford. That was Ince’s way: he took all the credit. But it now transpires that Francis was not only the star, playing Custer, but also the director and pretty well the producer of the film. In order to increase production of the extremely popular Westerns, Ince had divided his very successful company into two parts and put Frank in charge of the new division. It was this new division that made Custer’s Last Fight.

The DVD we see today, not bad in quality if you can forgive the odd flicker and fade, is the 1925 re-issue, and that itself says something: by the mid-20s movies had moved on enormously and the fact that a 1912 film could be shown, and successfully too, thirteen years on said much as to its quality. It appears that the original 3-reel Bison film of 1912 was expanded for a 1922, then 1925 release to five reels, perhaps using footage from Ince’s The Last Frontier, incomplete at his death.

From the first frame the Indians are the bad guys. We are told that they “bitterly opposed the advances of the white man and civilization”. Of course civilization and the white man were the same thing, and the Native American peoples had no civilization of their own. They were just savages.

A fine close-up of a Sioux warrior holding up his hand tells the white man to “keep out”. After some bucolic nature shots (California standing in for the Sioux lands) there is an Indian attack on a fort, amid much dust and smoke (which DW Griffith was to emulate). The US Cavalry rides to the rescue (wearing, in fact, very 1912 hats; I think Ford must have got a local cavalry unit to act as extras). This scene thus establishes itself as a basic Western-movie trope. Frank Ford himself used it in his contemporaneous production, The Invaders, Griffith used it in The Battle of Elderbush Gulch the following year, and so on ad infinitum.

In 1868, we are told, Congress granted the Indians “a vast territory” (the fact that it was tiny compared with that which they had inhabited previously is not mentioned) but, the screen text goes on, the effect of this was only to fill them “with pride and insolence”. You see, it’s a very 1912 document.

Then we have the advance of the railroad – for “the westward flow of civilization cannot be dammed”. A warrior, Rain-in-the-Face (uncredited actor) kills two equally uncredited surveyors (apparently with one arrow) to show his valor, and we see him boasting of the deed at the Standing Rock Indian Agency, where he is overheard by James McLaughlin (J Barney Sherry), Indian Agent. McLaughlin reports it to Custer. In fact McLaughlin was not appointed to Standing Rock until 1881, years after Custer’s death, but we don’t hold historical inaccuracy against Western movies. They aren’t supposed to be documentaries.

Now we see Custer entrust his brother Tom (uncredited actor) with the duty of arresting Rain-in-the-Face. Mrs Custer, Libby, looks on. This is Grace Cunard, Ford’s lover and partner, looking, it must be said if truth be told (for it should be told) a tad portly at this point. But then I should first cast the beam out of mine own eye, that I might clearly see the mote in my sister’s eye, if I might be permitted to paraphrase Matthew 7.

The portrayal of Sitting Bull (William Eagle Shirt – Ford did at least use Sioux as actors) is particularly offensive to present-day viewers. He is described as “cowardly but crafty” and is the villain of the piece. He presides over the battle (he did not, of course) “at a safe distance”. The Indians, who do a sun dance meant to resemble the later ghost dance, do not inhabit the Little Big Horn country or live or hunt in it; they “lurk” there.

There’s quite a bit of exposition of military strategy and tactics, more than modern Custer films would be permitted, with generals Terry moving from the east, Gibbon from the west and Crook from the south.

Francis Ford was an artist who taught his brother much, and there are some fine shots of Reno crossing the river to attack the Indian village, and crossing back under fire.

Crazy Horse and the Cheyenne fall on Custer’s right flank. The last stand takes place on a quite Montana-ish low hilltop, and Custer (with long-barreled Colts) is, natch, the last to fall. This established a movie precedent. Good old Rain-in-the-Face is present to cut out Tom Custer’s heart in revenge for his earlier arrest.

There is a fair bit of post-battle action. General Crook discovers Custer’s body and melodramatically weeps. Buffalo Bill appears (he was, we are told, “General Crook’s chief scout”) but tragically the mustachioed actor is uncredited (probably from The Last Frontier footage). We are treated to the ghost dance in 1890 and the death of Sitting Bull. Then the 54 minute-picture ends with a view of a battlefield monument and an American flag waving. The End.

Do not, prithee, look to this movie as a true and factual portrayal of Custer’s last fight. In fact, you’d be close to crazy to watch any Custer movie for that. But as a quality early silent Western and as an example of Frank Ford’s important work, it is essential viewing and I recommend it, dear e-pards, to your attention. 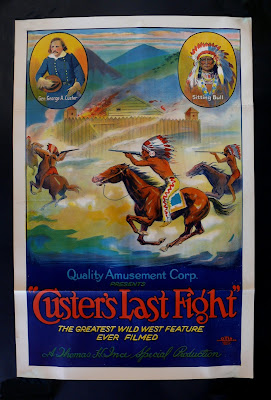