1966 was a bit of a year for Western remakes. A version of Stagecoach and another remake of Smoky would come out in August, and they were preceded by a bright color The Plainsman, in June. They’re tricky, remakes. If they are too faithful to the originals they are accused of being just copies, and if they are too different they are guilty of not being respectful of a great film. But Hollywood used the format a lot. Of course they remade silent movies as talkies, and then black & white ones in Technicolor, and/or widescreen. The producers could cash in on a famous title, so they had a head-start at the box office. On occasions remakes were actually better than the originals. It’s the third version of The Maltese Falcon that we all remember. As for Westerns, the third version of The Virginian was by far the best. The best version of The Spoilers (the John Wayne/Randolph Scott one) was also the third. And so on. But usually, I fear this was not the case.

The Plainsman was a good movie to remake because the 1936 original The Plainsman (click the link for our review) was no great work of art (it was directed by Cecil B DeMille, so a lot of it was pretty bad) and therefore changes could well be regarded as improvements, but it was very well-known as a Western and had been a big commercial success in its day. 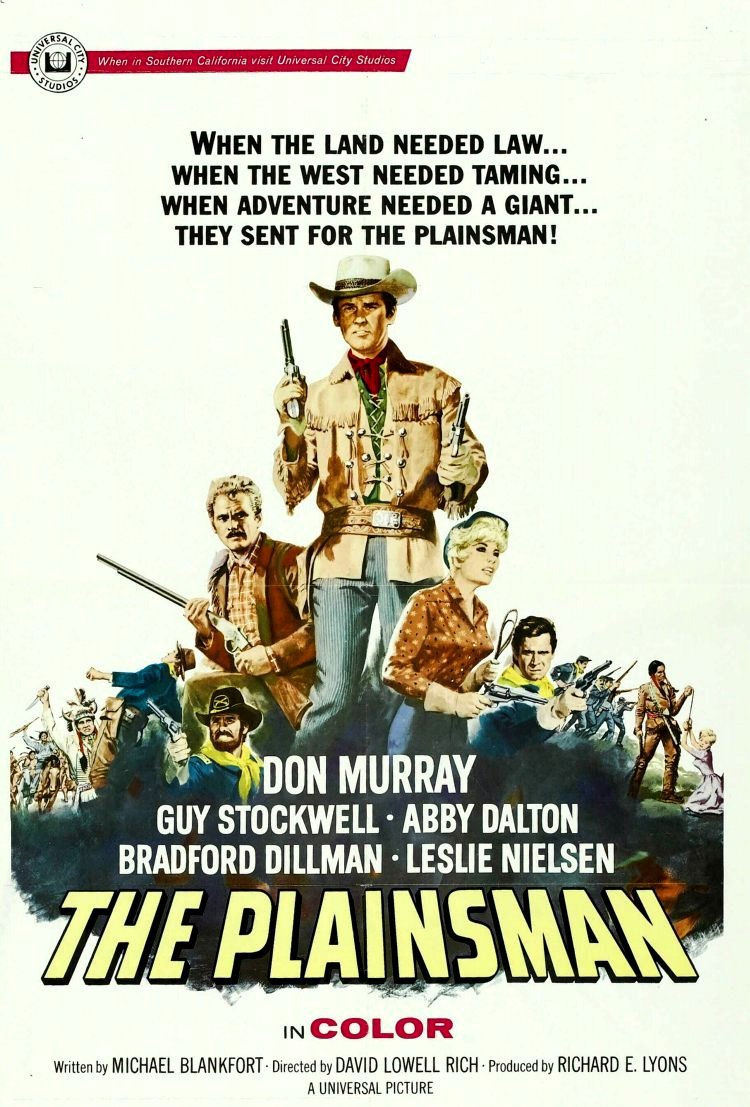 Another problem with remakes is casting. When you have someone as great as Gary Cooper, as Wild Bill Hickok, in an original, how are you going to follow that? Furthermore, Jean Arthur, the original’s Calamity Jane, was a perfectly splendid actress, so any later interpretation was going to be very hard, and was going to suffer from the (inevitable) comparison.Direction wasn’t going to be a problem, though, in this case. DeMille couldn’t have directed traffic. David Lowell Rich, the director of the 1966 picture, was more of a TV man. He was an expert at made-for-TV movies in the 1970s, specializing in disaster pictures. Westernwise, he helmed quite a few episodes of different TV shows. But even if he had been pretty ordinary, he would still have been better at big-screen Westerns than DeMille. The Plainsman in 1936 was, it is true, DeMille’s best Western, but that isn’t saying much. A TV director was appropriate because this movie was first destined for TV showing but in the end Universal went for a theatrical release – understandably, because it is quite a ‘big’ picture, and there was virtually no competition. Hard to name a really good big-screen Western released in 1966. The Professionals, maybe, A Big Hand for the Little Lady, possibly, Alvarez Kelly, OK, but it was hardly a stellar year.

They cast Don Murray as Hickok. Now Murray came just a tad late to the Western. He starred in From Hell to Texas in 1958 and These Thousand Hills in 1959 but the rest of his oaters were in the 60s and 70s, not the most glorious epoch of the genre. For example, he co-starred in Alan Ladd’s last Western, One Foot in Hell, and pretty bad it was too. It’s a pity because I thought he was really good in From Hell to Texas. Under Henry Hathaway’s direction Don underplayed the part and succeeded in projecting in a convincing way as a young, rather naive but still courageous loner – it’s a fine picture, actually. He is satisfactory as Wild Bill, though of course pale if you think of Coop. But you can’t hold it against a Western actor that he wasn’t as good as Coop. Who was?

DeMille had (perhaps deliberately) a very bland and colorless Buffalo Bill in his picture, James Ellison (who could just about cut it as Hopalong Cassidy’s sidekick but that was it). In ’66 they cast Guy Stockwell, Dean’s elder brother, as Cody. Guy didn’t do Westerns as a rule. Actually, in this version Cody has almost as big a part as Hickok, and is more than just a foil. And Stockwell doesn’t do badly. Curiously, he resembles and sometimes sounds like Charlton Heston, and I wonder if he was expressly going for a Chuck vibe, modeling his Buffalo Bill on Heston’s in Pony Express in 1953. If so, it was probably a mistake, Heston being so poor in Westerns (except Will Penny) and Pony Express (and its Buffalo Bill in particular) being pretty well junk.

I fear I may be becoming crusty and dogmatic. But hey.

A major weakness in the ’66 Plainsman was the Calamity Jane. We know that many screen Calamity Janes are pretty silly, but Hollywood did love a gal with a gun. This one was Abby Dalton, wholesome TV sitcom/game-show specialist, also pretty weak in another of her oaters, Cole Younger, Gunfighter, and who was probably unsuited to the genre. To say that she is unconvincing as Calamity is putting it too mildly.

This movie rehearses the old nonsense about a romance between her and Wild Bill, as the ’36 version had. Bill pretends to shun her, while she throws herself at him, but really he has a picture of them both in his watch and secretly loves her, that kind of thing. Hooey, all of it. But that’s Hollywood for you.

Both Hickok and Cody are shown as wily Indian experts who know the ways of the red man. The Indians (Cheyenne) are those classic Western-movie ones with a wise, statesmanlike leader who wants peace with the white-eyes and a young hot-headed firebrand all for the warpath. In this one the sage chief is Black Kettle (so this must be between Sand Creek and the Washita), played by Claude Akins-lookalike Simon Oakland (later to be Captain Bennet in Bullitt) while the bellicose brave is Crazy Knife, impersonated by our old pal Henry Silva.

Mr Knife has a repeater rifle (a Henry by the look of it) and this worries the Bills, for if the young hothead gets his way, the Army will be in trouble. The question is, who is furnishing the Cheyenne with these long guns? As you know, selling guns to the Indians in Westerns is a crime situated on the scale of heinousness somewhere between cannibalism and matricide. As in the opening scene we have been shown a type named Lattimer (Edward Binns, in one of only three Westerns he did, taking the Charles Bickford part) unloading crates marked FARMING IMPLEMENTS from the stage (the stage driven by Calamity, obviously) and he acts mighty suspicious when someone comes near these boxes, we don’t have to be Sherlock Holmes to deduce that it is he who is gun-running, the swine. Even if we haven’t seen the 1936 picture.

There’s an Army officer, obviously, and equally obviously he is one of those by-the-book types from back East who has no understanding of the Indians and won’t listen to wise fellows like either of the Bills. Lieutenant Stiles is an idiot, and incompetent, and is played by Bradford Dillman. Dillman shared a Best Actor award at the Cannes Film Festival with fellow co-star Guy Stockwell for Compulsion in 1959 and had even been Francis of Assisi in 1961 but this role was not exactly award material.

Casting Leslie Nielsen as Custer was a risky move. We could have all guffawed at his entrance. But he plays it straight, in the last reel, squashing the foolish Stiles and standing up for Cody and Hickok. Nielsen actually did four Western features but none was any good except The Sheepman in 1958.

The production values are high. It was shot in bright Pathécolor in attractive Arizona locations, and Kanab, Utah for the fort scenes, by Bud Thackery (Dark Command, San Antone, Thunder over Arizona, etc). There’s rather good music by ‘Johnny’ Williams, as he is billed. The print I saw was excellent quality, in both picture and sound.

It’s a sprightly 92 minutes, and it doesn’t drag. They’ve cut bits. DeMille tried to include the whole sweep of Western history from Abe Lincoln to the railroads to Custer’s last stand and Hickok’s death in Deadwood. The remakers rightly considered a lot of that as deadwood. But the basic (rather silly) plot is the same.It was written by Michael Blankfort, who worked on Texas, then Tribute to a Bad Man and, most notably, Broken Arrow. He used the original as a basis but allowed himself some changes. DeMille seemed to use a bigger team of writers than the cast (and he loved a cast of thousands) but this one confines itself to Blankfort.

It’s very much a 50s Western in tone and look, very far from the contemporary spaghettis which were debasing our noble genre. It’s unexceptionable if unexceptional. The Custer is mildly amusing.