Perhaps now that we have discussed Will Penny, Charlton Heston’s Western of 1968 (click the link for that review) we might take a look at other Heston-Westerns.

There weren’t as good as Will Penny, I’m afraid. It’s strange, really, that a macho gun-lover like Chuck didn’t do more oaters. You’d think he would have been cut out for the genre. But he only made ten (disregarding TV movies, the semi-Western Call of the Wild and his cameo as Henry Hooker in Tombstone), not a lot for the epoch. And the ones he did lead in were often iffy or even downright bad. 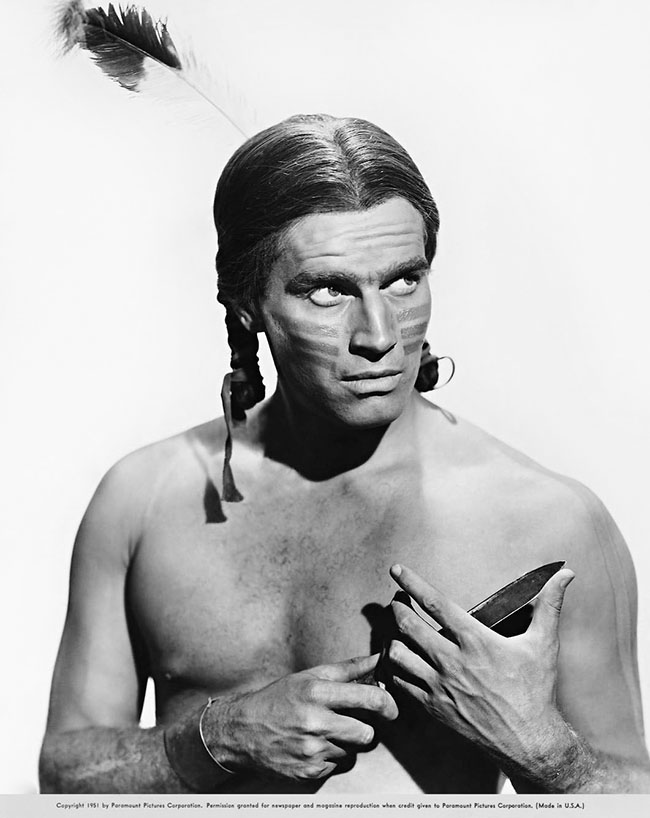 His very first, The Savage, was an earnest version of the old yarn in which a wagon train is attacked by Indians and all the settlers are killed except a small boy who is adopted by the Sioux and brought up by their chief, Yellow Eagle. The whites, in breach of treaties, move into the Black Hills of Dakota and the young man is now conflicted: where do his loyalties lie?

There were earlier silents based on this idea and later movies too, such as Alan Ladd being raised by Indians and later joining the Mounties in Saskatchewan (Universal, 1954). Little Big Man too. ‘The Savage’ is meant semi-ironically because in these movies the hero brings peace between the red and white peoples and sometimes shows more civilizational attributes than the hard-liners on each side.

The Savage, though, is a bit of a plodder in this line. Yes, there is action and Charlton goes Hestoning around the hills a lot with his shirt off showing how he has become the Alpha male of his Sioux tribe. The US Cavalry officers are quite dumb, as usual, but there are a few more enlightened men, also as usual, notably Milburn Stone (Doc Adams in Gunsmoke) who is rather good, in fact, as Corporal Martin. There’s also pleasant Black Hills location photography in Technicolor by John F Seitz (The Iron Mistress, The Big Land, Saskatchewan). So yes, it has its points. 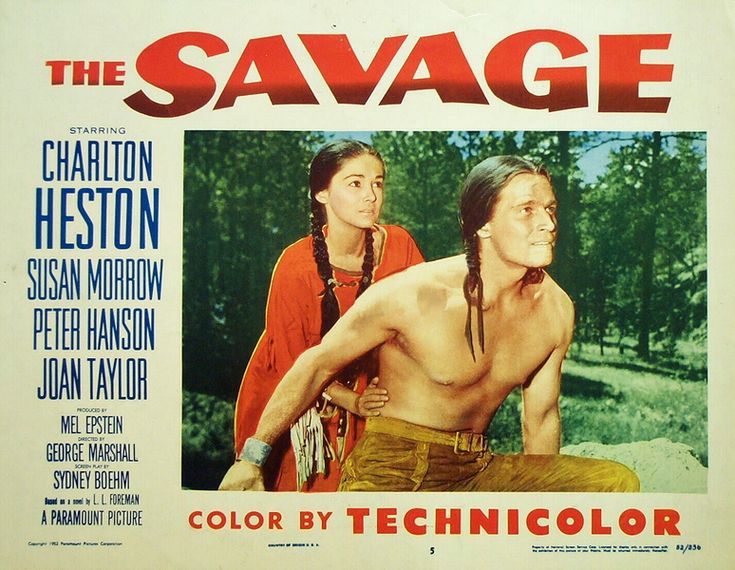 The casting, including Heston, was not one. Most of it was distinctly minor league. Heston himself had made a mark as Antony in Julius Caesar in 1950 and had also led in the crime drama Dark City that year but otherwise had done mostly TV work, and was a relative unknown on the big screen – certainly anyway in Westerns; as I said, this was his first.

But the chief trouble comes not with the acting but with the writing, uncredited on screen but in fact by Sydney Boehm and LL Foreman. It is stilted and over-earnest. Boehm was a fine writer on non-Western The Big Heat, and Foreman penned the stories for a few lesser oaters starring Sterling Hayden and George Montgomery but these writers weren’t in the right league for this one. The actors playing Indians keep their Californian drawls and make no attempt at ug-speak, which is good, but they are obliged to deliver ponderous, ‘noble’ sentiments in a mannered way. Erik Morel on DVD Classik said that their discourse “se révèle languissant, solennel, bavard et sentencieux, comme la plupart des discours qui émailleront la suite du film” (their speech is languid, solemn, over-talkative and sententious, like most of the speeches that pepper the rest of the film).

And we need some humor, don’t we? I mean 95 minutes without the hint of a smile is a bit tough going. And the actual root causes of the conflict aren’t really probed at all.

At first, the growing boy, now known as War Bonnet, lives a serene life in the bosom of his new Sioux family but when rumors spread of incursions by white men, he is sent off in ‘white’ clothes, looking like a trapper, to the local fort in order to find out if it’s true. On the way he saves some soldiers from Crow Indians, so he’s in the good books of the Army when he gets to the fort (one of those Hollywooden ones, not an open Fort Laramie-style place). There, naturally, lives a fair maiden, Tally (Susan Morrow), sis of the officer he saved from the Crow, and of course love blossoms. Well, it would. Joan Taylor, as an unconvincing Indian gal, is la Morrow’s chief competition for Heston’s affection. Honestly, though, the whole love-interest angle is pretty perfunctory.

The Savage is, I suppose, a colorful US Cavalry-and-Indians romp of the period and it has some kind of a message. Broken Arrow had come out in 1950 and started to correct in a more nuanced way the old stereotype of nameless yelping redskin savages attacking the fort, so more thoughtful pictures about Indians were in vogue.

George Marshall directed. He did 50 Westerns from Across The Rio Grande in 1916 to Hec Ramsey in 1972, including Destry Rides Again, When the Daltons Rode, The Sheepman and part of How the West Was Won, and he usually did it with brio. There are some good Marshall moments in The Savage: for example, a scene looking over the green Black Hills from the fort with very many extras in the distance (the budget was there) and some of the later action is well handled. But a lot of the early reels are ponderous and laborious. It was far from Marshall at his best.

Paramount brought it out while George Stevens was up in Wyoming shooting their Shane so big Westerns were in. And yes, it’s worth a watch alright. But Shane it ain’t.

Nor is it Broken Arrow, in which James Stewart knocked spots off Heston as hero, and it can’t hold a candle to contemporary pro-Indian Westerns such as Anthony Mann’s Devil’s Doorway with Robert Taylor, and certainly not, if you count it as a pro-Indian pioneer (I rather do) to John Ford’s Fort Apache.

Variety was lukewarm in its praise of The Savage: “This tale of Indian fighting travels in fairly devious circles to relate a standard story. However, it has excellent outdoor photography and liberal amounts of Indian fighting scenes.”

Later critics such as Brian Garfield said something similar. Garfield thought it was “grimly overacted and the script makes no attempt to probe actual problems, but there’s plenty of color and action; it’s not as bad as some.”

It got nowhere at the box-office. Western dollars that year were spent going to see High Noon, of course, but it was also the year of the likes of The Big Sky and Bend of the River, and The Savage wasn’t anywhere near those in quality or appeal.

As a footnote, French titles for Westerns were often notoriously bad and this one was especially ridiculous. They made the hero the son of Geronimo, completely ignoring the fact that we are among Plains Indians in the Dakotas and not Apaches. Doh. 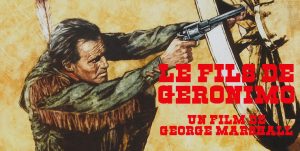 It wasn’t the most auspicious start to Charlton Heston’s Western career, yet the following year things were to get a great deal worse. But for 1953 Heston-Westerns, come back soon!