Jailed lawman does the right thing

In our season of 1953 Westerns (o wondrous year) we have already looked at a couple of Dale Robertson oaters. Well, today, the third one he did in ’53, this time not at Fox but loaned out to an Edmund Grainger production released in August by RKO. 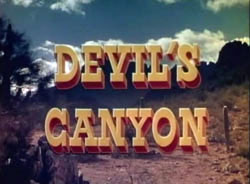 Grainger went right back to the 1934 version of Riders of the Purple Sage and was probably best known in the Western context for the Anthony Mann/Glenn Ford Cimarron (1960) and, also with Ford, the highly entertaining The Sheepman (1958).

You might expect a Western with the title Devil’s Canyon to be another one in which Dale Robertson trapped a wild stallion (as he was to do in Black Horse Canyon), or maybe it would be about a hole-in-the-wall lair of outlaws. In fact, though, it’s just another prison movie dressed up as an oater (a bit like Hellgate the year before or There Was a Crooked Man in 1970) and it is centered on Yuma Territorial Prison in Arizona. Why the prison is known as a canyon is never made clear. The picture’s working title had been Arizona Outpost, which isn’t much better. In other languages it was called La Nuit Sauvage, Hölle der Gefangenen, etc. 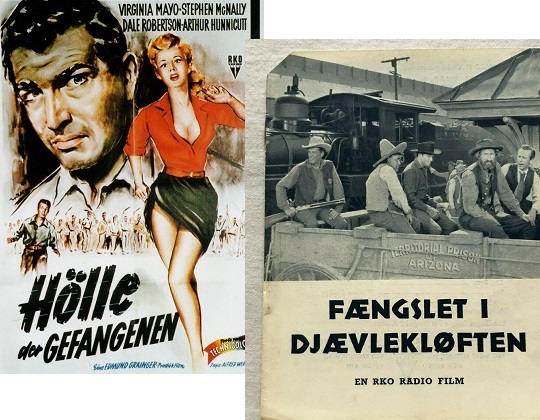 It was 1953 and so the picture was shot in 3D, all the rage early that year, as we have already seen in this thread when reviewing the year’s 3D Westerns, but like other such movies, by the time it was released, the craze was already on the decline and so few got to don the 3D eyeglasses. The vast majority of audiences saw the film in traditional format. A few years back Richard Schwarz, owner of the Thalia theater in New York, was said to be restoring the film in order to screen it in 3D but I don’t know if that happened.

It was an at best mid-budget RKO Western, with a cheap-looking studio set doing duty for Yuma. The modest expenditure was probably as well because it was only the nineteenth most popular Western of the year, according to Variety (January 13, 1954 article) just managing to top the $1m gross at the box office. There are very few location shots – some round Cortaro, AZ and others in Bronson Canyon, Griffith Park. The picture was shot in Technicolor but the modern print at least has those blue-wash pastel shades that remind us more of Republic’s Trucolor process. Perhaps it had brighter colors originally. The DP was Nicholas Musuraca, who started shooting Tom Tyler silent Westerns in the 20s but would later do a fine job in b&w on RKO’s Blood on the Moon (1948). Devil’s Canyon, however, has not that much to recommend it from a visual point of view.

The picture did have one plus point, though, and that was the excellent cast. That was headed by the blonde bombshell also on loan from Fox, Virginia Mayo, who did quite a few Westerns. She was, notably, Colorado in Colorado Territory in 1949, her first oater, with Joel McCrea, then she was in Along the Great Divide with Kirk Douglas in 1951 and The Iron Mistress with Alan Ladd in ’52 (with some ambiguity if the ferrous madam of the title was Bowie’s knife or Ms Mayo), so this was her fourth. Later she would do The Proud Ones with Robert Ryan and would return with Ladd in The Big Land and with McCrea in The Tall Stranger. So she was quite used to the genre. In Devil’s Canyon she plays a glam stage robber who, in an improbable plot twist, is sent to Yuma (an all-male prison) which just happens to be where her lover Stephen McNally is incarcerated, as well as her would-be lover Dale.

Actually, to be fair to the movie, there was a woman prisoner at Yuma, and she was a stage robber too. It was Pearl Hart. In 1899 (though the movie is set in 1897) Hart and an accomplice known as Joe Boot (probably an alias) decided to rob a stagecoach that traveled between Globe and Florence, Arizona, one of the last stagecoach routes still operating in the territory. Hart had cut her hair short and was dressed as a man. She was armed with a .38 revolver while Boot had a Colt .45. Boot held his gun on the passengers while Hart pocketed $431.20 and two firearms. After the robbers had galloped away, the driver unhitched one of the horses and headed back to town to alert the sheriff. Classic Western stuff.

And, also in true Western fashion, a posse was organized. Sheriff Truman of Pinal County and his men caught up with the pair on June 5. Truman reported that he found them both asleep, and that Boot surrendered quietly while Hart fought to avoid capture. Hart was imprisoned in Tucson, there being no facilities for women in Florence, but escaped in October, being recaptured near Deming, NMT two weeks later. Both Hart and Boot were then sent to Yuma Territorial Prison to serve their sentences. Boot became a prison trusty, driving supply wagons to chain gangs working outside the walls. One day while driving a wagon he escaped and was never seen again.

As for Hart, she became quite a celebrity. The warden allowed her to entertain newspaper reporters and other guests as well as pose for photographs. Hart is said to have used her position as the only female at an all-male facility to her advantage, playing admiring guards and prison trusties off each other in an effort to improve her situation. She was finally released after a December 1902 pardon from Arizona Territorial Governor Alexander Brodie. Her later life is shrouded in mystery. By one account she worked for a time for Buffalo Bill’s Wild West. Quite a story.

Having said all that, though, Virginia Mayo’s Abby Nixon bears little resemblance to Pearl Hart – especially in looks!

Dale Robertson, still four years before Tales of Wells Fargo, was OK in big-screen Westerns. In Devil’s Canyon he plays an ex-lawman who has hung up his guns. Indeed, the whole town has, and there is a local ordinance that prohibits gunfighting of any kind. Two thugs, the Gormans (John Cliff and Fred Coby) come to town to exact revenge on Dale because when he was sheriff he had put their brother Jesse away. The movie starts out Western enough as there is a running gunfight in the street and the two heavies are duly dispatched by Dale, using borrowed six-guns. That’s enough to get the ex-lawman himself locked up, and it’s Yuma for him, a ten-year stretch.

As for third-billed McNally, He had first appeared in our beloved genre as James Stewart’s evil brother in Winchester ’73, the one who first steals the famed rifle, and then Universal had decided to try him out as Western lead, in Wyoming Mail, Apache Drums and The Stand at Apache River. He also played as the crooked marshal alongside Audie Murphy in The Duel at Silver Creek. But it didn’t really take and after that it was ever-smaller parts and then TV work. I must say, though, he isn’t too bad (within the limits of the rather pedestrian script) in Devil’s Canyon as the tough boss convict determined to get the lawman who put him away, the lawman who is now a fellow inmate. Later in the film he flirts with madness. He will, we know early on, definitely come to a sticky end, and (if I may be allowed a spoiler) he duly does, at the wrong end of a Gatling gun fired by Dale.

Who else have we got? Well, good old Arthur Hunnicutt has an entertaining comic-relief part as a lifer who is Dale’s cellmate, Whit Bissell is another fellow incarceree, Robert Keith (Brian’s dad) is quite good as the warden, Jay C Flippen is the sadistic head of the prison guards, Morris Ankrum is the sheriff who arrests Dale in the first reel (though never seen again), Earl Holliman is a henchman and Irving Bacon is a corrupt guard who falls for Mayo’s wiles. You also get, criminally uncredited but unmistakable, Paul Fix and Glenn Strange the Great. See? I told you it was a good cast.

The actors were a bit wasted, though, with stodgy direction and plodding writing. The first was by Alfred L Werker, a RKO stalwart, who directed 14 Westerns between 1928 and 1956 but some of them lacked a bit of zip. He did direct the 1930 version of The Last of the Duanes (the George O’Brien one, not Tom Mix’s) and later the Fred MacMurray oater At Gunpoint for Allied Artists in 1955. His best Western work was certainly the nice little noir Rebel in Town (1955) and in particular The Last Posse (1953, review will be in Season 2 of our survey), the only Western Broderick Crawford was ever good in, and he was very good in it.

The American Film Institute catalog tells us that according to a Jan 1953 Los Angeles Times item, RKO assigned William Bowers to write the screenplay of Devil’s Canyon but in the end the script was by Frederick Hazlitt Brennan. He used as a starting point a story by Bennett Cohen and Norton S Parker. Brennan wrote 110 episodes of The Life and Legend of Wyatt Earp, so deserves some respect from us Westernistas, and also contributed to Union Pacific (but then who didn’t?) and Branded.  Cohen and Parker were low-budget Western specialists. All in all, in fact, Devil’s Canyon is on the B side.

The New York Times said it was “A formula prison picture … one of those things that come and go.” Bosley Crowther added, “The yarn is as flat as the desert on which the prison is set. And that is a fact, for all the 3-D in which the picture is made. Once more it is evident that a mechanical technique is no salvation for a meagre [sic] film.”

There’s an over-neat happy-ever-after ending which does nothing to add to the plausibility of the tale. No, e-pards, sorry to say it but this one is a bit of a dud. Dennis Schwartz said it was an “Unconvincing bleak prison-break story costumed as a Western.” Brian Garfield called it “a static set-bound meller, slow and dreary” and I can’t disagree with that judgment, I fear, much as I would like to, being a bit of a Dale fan on the quiet (Wells Fargo was one of my favorite series on TV as a boy). 1953 was a superb year for Westerns but this one, well, …

I’m going soon to pause our series of 1953 Westerns after one more. I can’t do them all (there were 96!) though ’53-ers will return in future posts on Jeff Arnold’s West when we get to Season 2. But as our last oater of that wondrous year in the present season I’ll review a picture that beat all comers at the box-office apart from Shane and Hondo. Now guess which movie that was. I think you might be surprised. To find the answer to this classy conundrum, come back soon!