The Loving Wrath of Eldon Quint by Chase Pletts

Last month Chase Pletts’s novel The Loving Wrath of Eldon Quint (Inkshares, 2021) received honors for traditional novel and first novel at the Western Writers of America’s Spur Awards. Having just read it and having been lucky enough to interview Mr Pletts, I can see why. It’s a fine book. 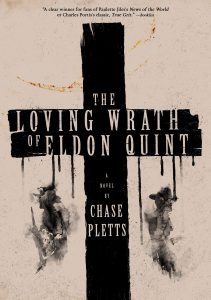 In some ways it’s not a ‘Western’, not anyway in the Louis L’Amour or even Larry McMurtry sense, so much as a literary novel that happens to be set in the West. When I asked Mr Pletts what Western books he especially liked or he felt might have influenced him, he mentioned several but said that “Charles Portis was a big influence; the tone he conjures is as darkly comedic as it is rugged and real.” I can see that. I would say that Eldon Quint is more ‘dark’ than ‘comedic’ but you feel that had Portis been alive today he might be writing books like this.

If you’re interested, Chase also cited Annie Proulx’s Brokeback Mountain and The Ballad of Dingus McGee by David Markson, and he added, “And there’s a wonderful novel that came out a few years ago called In The Distance by Hernan Diaz that I really loved for its delightful and disorienting strangeness.”

Although the language of Eldon Quint is not as ‘original’ as Cormac McCarthy’s, I felt when I was reading that there were distinct echoes, and the author said of McCarthy, “I’ve read everything he’s done. He once said that the dirty little secret of books is that they are made from other books. I submit to that assessment, as all of the books mentioned here had a profound impact on the one I wrote.”

McCarthy has an especial talent for originality of language and I would say ‘loading’ words with a poetic charge. I wondered if Chase Pletts read or wrote poetry. He said:

“If I have ever written poetry it has been purely by accident. Though I was a musician and a songwriter in another life and that influences my prose I guess.  In fact, a major influence on the book comes from a song by Los Lobos called Will the Wolf Survive. The opening verse is essentially the beginning of the book:

Through the chill of winter

Running across a frozen lake

Hunters hard on his trail

All odds are against him

With a family to provide for

But one thing he must keep alive

Will the wolf survive?

I wanted the book to feel lyrical, to read like a song—a potentially dangerous pursuit for the simple reason that you will probably overwrite and come off too flowery, and I did in places. Westerns are often straightforward, minimalist pieces built out of terse, declarative sentences, and it was certainly hard to strike a balance. But I’m glad I went for something a bit more literary—it was more fun to write than a straightforward saga.”

When I (inevitably, it’s Jeff Arnold’s West after all) asked if Western movies or TV shows had figured in his life, the writer answered, “Western films have loomed large in my mind ever since I was a boy watching Bonanza reruns on a black and white TV in my grandmother’s basement. I was young, single digits maybe, when I saw The Treasure of the Sierra Madre and The Good, The Bad, and the Ugly—strong influence that remain with me today. Unforgiven is a favorite, though I don’t see it as a revisionist piece because ultimately William Munny (Clint Eastwood) becomes that classic taciturn western character who uses violence rather than words to solve his problems. The Searchers on the other hand is a wonderful revisionist piece.

When I was writing my novel, I rewatched The Misfits. Arthur Miller, who wrote the screenplay, called it an ‘Eastern Western. For my money, it’s one of the greatest films John Huston ever directed. It had a great influence on shaping my own novel because it was very much about people trying to connect and being afraid to connect.”

But of course while influences are interesting, even illuminating, they are only that, and Chase Pletts has his own ‘voice’.

The story has an interesting plot, with twin brothers as central characters. It seems to us at first that one of them, Eldon, is the good guy who has plowed the straight and narrow furrow (literally, for he is a farmer) while the other, Clayton, is a noted outlaw – so much so, in fact, that lurid dime novels are written about his exploits. If the book arrived on the screen (and the author is indeed a screenwriter) we might imagine the same actor playing both roles. We’ve seen movies like that!

When Clayton turns up at the farm in the Dakotas he is evidently up to no good and brings danger to Eldon and his two young sons. But gradually, slowly, as the book progresses, roles seem to reverse. We find that the heinous villain has saving graces and the stolid farmer has a murky past. It’s well done.

The plot does progress slowly, but not in a bad way. Tension builds and builds. That part is well handled too.

In the best tradition, the book begins with action and gunfire and a siege, and it climaxes in one too.

After the first eighty-odd pages the Yankton area is left behind as Eldon and his young son set out on a grim mission (I don’t want to say more) into Missouri, and almost all of the rest of the action occurs there.

The chief villain is a larger-than-life character (very literally; he is a giant of a man) and if I had a criticism (though I don’t, really) it would be that the Major is a tad overdrawn. It’s a temptation, to make the bad guy impossibly indomitable. It makes the challenge greater and the victory more dramatic, I guess. But that’s a quibble. He is certainly colorful!

The writer has a gift for providing enough detail of everyday-life items to make the tale authentic and feel right but not so much that it is intrusive. He wears his research lightly, as it were. You do feel you really are in the place and time. I’m sure the Spur judges felt that too.

The writer told me:

“I did a lot of digging into the language of the Ozark region, which is where I saw the main characters Eldon and Clayton coming from. The inhabitants of that region are descendants of Shakespeare’s England and you can hear it in the metaphors and musicality they use to communicate. I found a book written at the end of the 19th century (the title has escaped me now) that captured a lot of the patois from that era and I put a lot of that language into the mouths of the characters.”

A strong strand of the book is the evident father and son loving relationship, and a fraternal one, in a less obvious way (it is a kind of loving wrath). The author says, “I tried to write as intimately as possible, and about intimacies, especially between men—brothers; fathers and sons—and between characters that are nothing like me.” He tells in an afterword how he suffered when his own son was dangerously ill, and you feel that the whole story is emotionally charged in this way.

“This will sound like sacrilege to some, but I originally wrote the novel with the sole intention of turning it into a film. Western films, once a staple, are seen today as risky bets, which is why so few get made. I thought if I put the effort into writing a novel—creating the coveted intellectual property—then adapting it into a feature-length screenplay, I might sway the odds in my favor. That remains to be seen. But if I know one thing, it’s that what is considered common knowledge in Hollywood—that Westerns don’t sell—is almost always wrong. For instance, an executive at HBO once told Taylor Sheridan that nobody would want to see a show like Yellowstone, so he took the project elsewhere, and now it’s one of the most-watched series on the air.”

Well said, Mr Pletts, and I hope your excellent book does arrive on the screen – big screen or small. Though they’re all quite big these days, aren’t they.

And lastly I’d just add that I can’t remember reading a novel with such a totally brilliant ending.