Deeply silly but a lot of fun

The black & white Universal Westerns of the 1940s were often pretty silly, but they usually had a certain vim and zip about them, and Badlands of Dakota, a Wild Bill/Calamity Jane yarn, was no exception. It is even more preposterous than most Westerns of the period, making no attempt at all to stick to fact, but since when did we expect historical accuracy from Western movies? The important thing is that the film is energetic and fun. 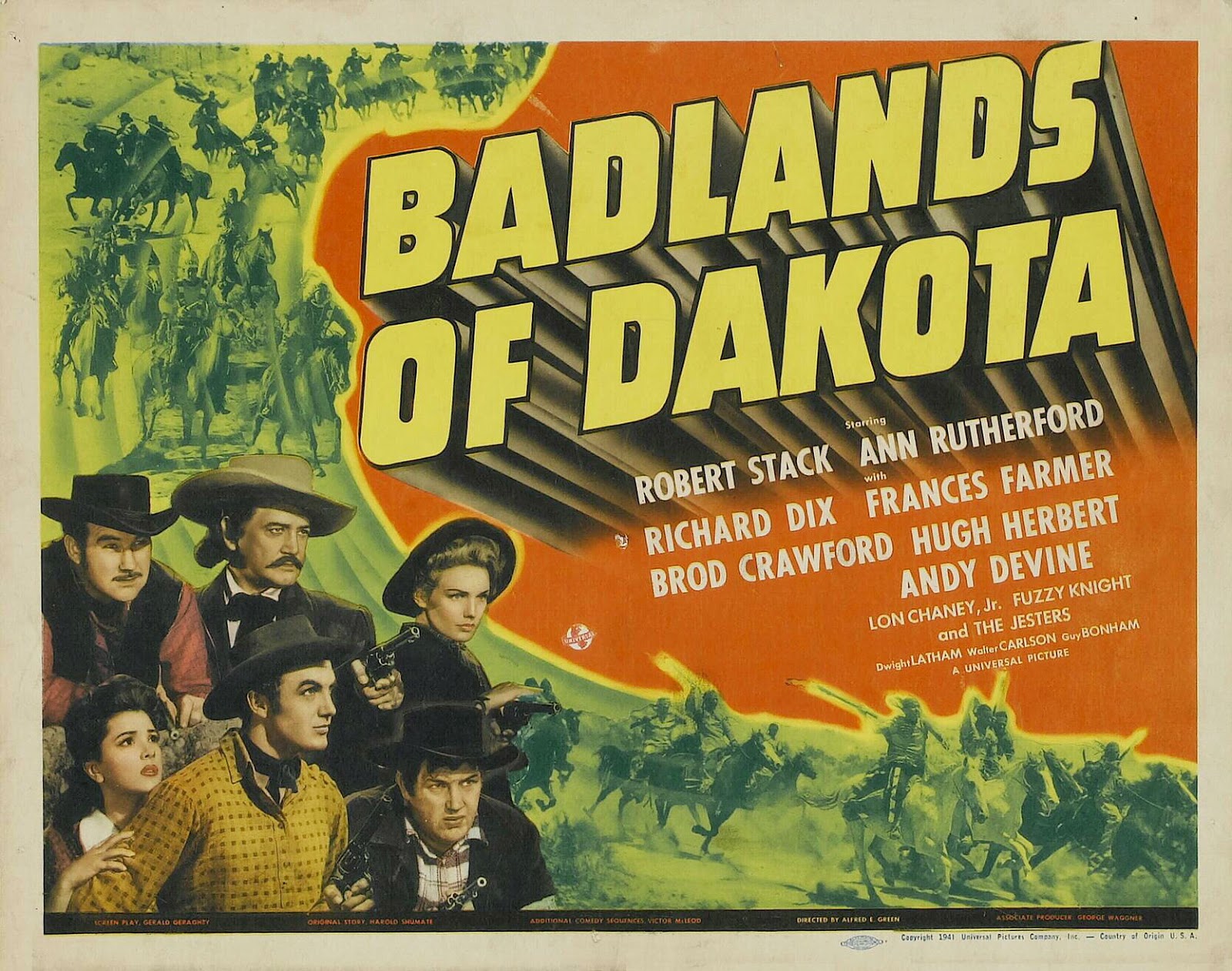 It’s a nice quality print, too, not one of those crackly, faded efforts one often sees, and it holds up well on a big modern TV screen. It was shot by Stanley Cortez (later the cinematographer on Apache and Man from Del Rio) with some Red Rock Canyon locations – Universal didn’t stint on this aspect.

The direction is by Alfred E Green, who had been making large numbers of films since 1912 with Selig Polyscope. He directed Bette Davis in Dangerous in 1935 and also later did The Jolson Story in 1946, so he was no unknown or minor figure. He only made nine Westerns, though: four silents in the early days and five oaters subsequently. His high point, without a doubt, was the charming little Joel McCrea oater Four Faces West  in 1948, a little jewel. In Badlands he keeps the pace rattling along and there’s plenty of action.

Young Robert Stack was given the lead, as Jim Holliday (with a hint that he’s related to Doc, or even is Doc). Of course, like most people I think of Mr Stack as Eliot Ness but he had been at Universal since the 1930s. Badlands was his first Western, and he only made six, generally eschewing the genre, even in its 1950s heyday. Here he is the blond lover of Ann Rutherford and, despite the publicity still below, not really a gunslinging tough-guy at all. Probably his blondness kept him out of lead Western roles.

He steals la Rutherford away from his big brother Broderick Crawford, Bob. Of course the year before Broderick as Bob (Bob Dalton) had also had his fiancée stolen away from him, that time by Randy Scott, in When the Daltons Rode. He was beginning to get a rep as a jilted lover. Can’t imagine why; what gal wouldn’t go for that sylphlike frame?

I’m afraid Crawford was never convincing in Westerns. His build didn’t help, I mean poor horse, but fat or not, although he was certainly tough, he was too Eastern, too urban to be any good in oaters. He needed mean streets or a highway patrol car. His delivery was a machine-gun quick gabble, fine for cop or gangster roles but not for a Westerner. He was plain ridiculous in The Fastest Gun Alive (fanning his double-action Colts) in 1956. I do make an exception for The Last Posse in 1953, in which he was good as the alcoholic sheriff who finally does what a man’s gotta do. But he really liked the genre and appeared in fifteen big-screen oaters altogether, sixteen if you count his cowboy joining the Foreign Legion in Beau Geste, as well as many Western TV shows. In Badlands he is a saloon owner who, when thrown over by his belle in favor of his younger bro, goes bad and dresses up as an Indian with Jack McCall’s gang and holds up the Deadwood stage. (Yes, I’m afraid the plot is that silly).

Jane (she is never referred to as Calamity) is played by Frances Farmer. Ms Farmer went to Hollywood in 1935 where she won a seven-year contract with Paramount but in 1943 she was declared mentally incompetent and was committed by her parents to a series of asylums and public mental hospitals. It was a tragic affair. She didn’t really do Westerns; Badlands was the last of only three (the previous one, in 1936, had also been directed by Green) but in the first, Rhythm on the Range in 1936, she had the female lead opposite Bing Crosby. In Badlands as Jane she was, like Crawford, totally unconvincing, managing none of the Doris Day-type tomboy charm the role was usually accorded and still less any genuine pathos. The Variety review thought her performance “outstanding”, though, so maybe it was just me.

Richard Dix does Wild Bill Hickok and, despite the daft script, he does it rather well. Dix was RKO’s leading man from the dawn of talkies through 1943. At six foot and 180 pounds, he presented a burly figure (though no rival to Brod) and had been a successful athlete in earlier years – his first roles were in baseball and football movies. He was quite a box-office draw for RKO in the 30s and he did a good number of Westerns, starting with a Victor Fleming-directed silent, the first version of Zane Grey’s To the Last Man, in 1923 and finishing with The Kansan in 1943, when he was in his fifties. His most famous Western role was of course as Yancey Cravat in the 1931 hit Cimarron, for which he was nominated for an Oscar.

In Badlands, he is a rather dashing Wild Bill in frock coat, long hair and mustachios. He does not have an affair with Jane at all, as so often in movies, though does ride with her on a posse with Marshal Robert Stack to capture the bad guys. He shoots a couple of fellows on his first day in Deadwood, presumably to establish his gunslinger street cred, but he is told that it didn’t matter at all, they were rogues anyway. Bill turns down the marshal’s job in favor of Robert.

Hickok is quickly murdered by Jack McCall (we just hear the shot and see his corpse draped over the card table, with the dead man’s hand of aces and eights). Bosley Crowther in the New York Times wrote, “Apparently the boys at Universal were so intent on shooting the works when they put together Badlands of Dakota, the current noise-maker at the Rialto, that they let their extravagance carry them to the point of shooting Richard Dix too. And thus this formidable gentleman, whose obligations in a film are generally great, is casually polished off before the picture is three-quarters through and before he has had a chance to do much more than say ‘Hello’ in a distinctly minor role. Mr. Dix, as Wild Bill Hickok, gets the shortest shrift of any star yet ditched. And that only goes to show you how reckless the boys at Universal were.”

Some of the minor roles are fun. Lon Chaney Jr (never in danger of an Oscar nomination) does Jack McCall. His McCall is the gang leader (“I give the orders around here,” he sternly admonishes fellow badman Brod) and has a scam in which he and his hoodlums dress up as Indians and rob the stage. This means, however, that we have an unintentionally hilarious scene of Lon Chaney and Broderick Crawford in warpaint and feathers, on their horses waiting to waylay the stagecoach. Hero Marshal Stack shoots McCall in the end, so he is not hanged at Yankton for the murder of Hickok.

Custer appears, impersonated by Addison Richards. This Custer is noble and brave, and saves the town of Deadwood from a devastating Indian attack (the Sioux burn the place to the ground) by charging in with the 7th Cavalry at the last moment, before declaring that he can’t stay: he has to “finally have it out with Sitting Bull and his Sioux at Little Bighorn”, and he gallops off. Addison Richards is actually worth looking out for. He appeared in huge numbers of big- and small-screen Westerns (140 in all) from Lone Cowboy in 1933 to an episode of Rawhide in 1964. He often did the crusty old-timer or comic sidekick.

Fuzzy Knight is the stage driver, Hurricane, and duly does his schtick. Andy Devine, as Spearfish, the MC of the variety show at the Bella Union, ditto. They are both always fun to see. As Devine was one of the few actors who could in fact handle a six-up stagecoach you’d think they’d swap his and Fuzzy’s roles round, yet nay. The Jesters give us some enjoyable songs. Glenn Strange the Great is there too. Though uncredited, he has a few lines and he’s not just an extra. He’s a thug, obviously. How I like Glenn-spotting in Westerns.

Crowther in the Times said, “Judged by the common Western standard of action and noise-intensity, Badlands of Dakota is up to scratch.” Variety said, “It’s about the most actionful feature to come from this studio in months. Not intended as an ‘epic’,  it’s best fitted to the programmer category.” It added, “Production looks like a real money-getter for Universal”. And indeed, the Hollywood Reporter commented in September 1941 that the film had set a box office record at the Rialto theater in New York City. So that’s something. 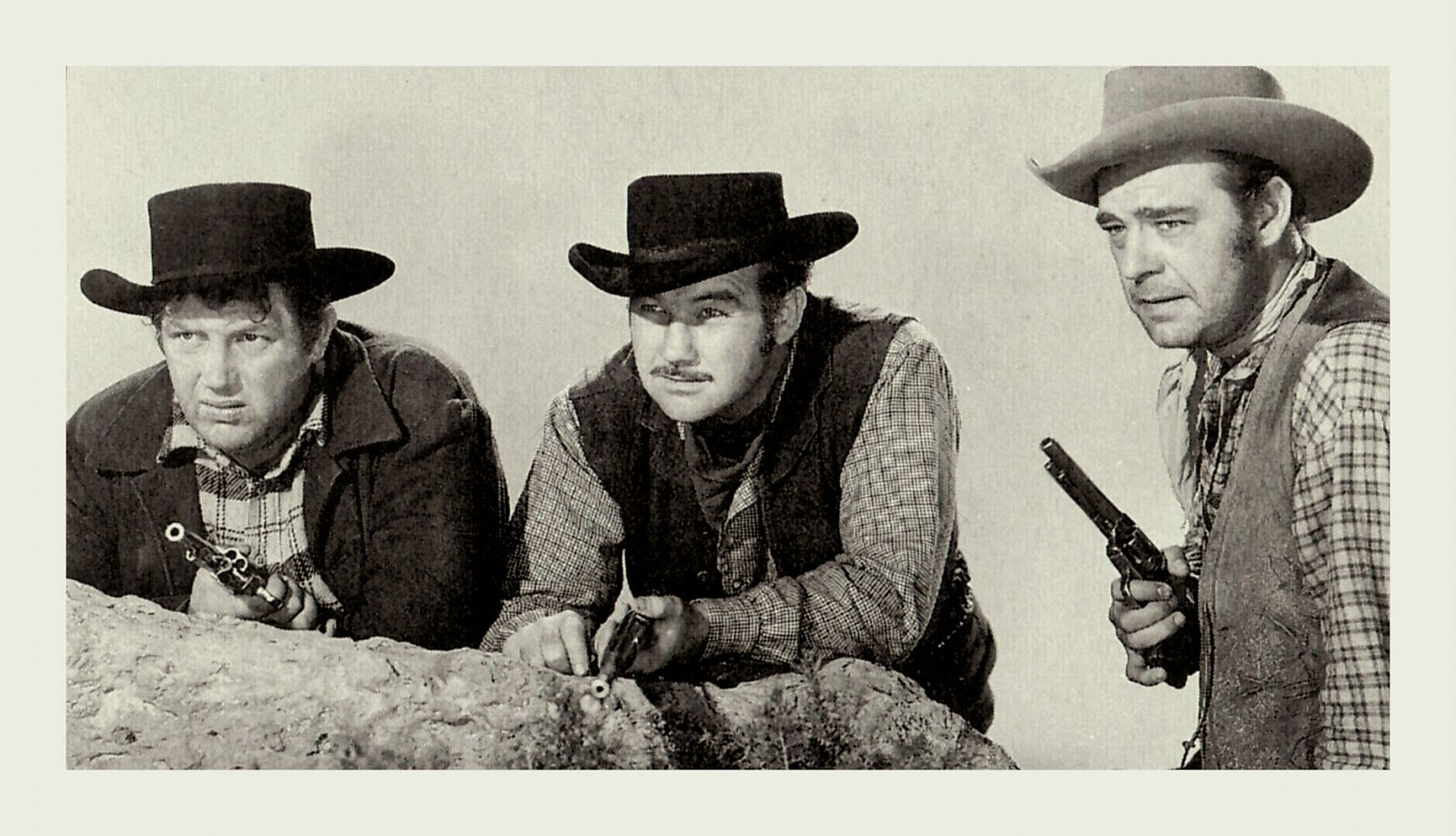 It’s not great art. Stack called it “one of the most forgettable Westerns ever made, a non-masterpiece,” which was a bit harsh. Silly, yes, but not forgettable. I’d say in fact memorably silly.

But it’s amusing and entertaining and most definitely worth a watch and a chuckle.