Hollywood had always been inspired by the Texas Rangers. They were the American Mounties, valiant heroes who tracked down criminals and always got their man. The fascination started early: Zane Grey’s 1914 novel The Lone Star Ranger was filmed in 1914, 1919, 1930 (the most famous one, with George O’Brien as Duane) and 1942. The 1935 book The Texas Rangers: A Century of Frontier Defense by Walter Prescott Webb was enormously influential. It extolled the virtues of the Rangers in glowing terms. Sometimes Webb was ridiculous:

The real Ranger has been a very quiet, deliberate, gentle person who could gaze calmly into the eye of a murderer, divine his thoughts, and anticipate his action, a man who could ride straight up to death. In fatal encounter – the last resort of a good officer – the Ranger has had the unhurried courage to take the extra fraction of a second essential to accuracy which was at a premium in the art and the science of Western pistology.

Tom Mix was a Texas Ranger in the 1930s serial The Miracle Rider and Republic put out another serial, King of the Texas Rangers, in 1941. Roy Rogers and Gabby Hayes were Rangers in The Ranger and the Lady in 1940. Set in the 1930s, Tales of the Texas Rangers ran on NBC radio in 1950 and ’51, with Joel McCrea, and was a kind of Western Dragnet. The 1957–1959 CBS TV show Trackdown, starring Robert Culp as the fictional Ranger Hoby Gilman, even carried the official endorsement of the Rangers and the State of Texas. Paramount’s big King Vidor-directed picture The Texas Rangers in 1936 starring Fred MacMurray was remade in color in 1949 as Streets of Laredo, with William Holden in the lead. And so it went on (and on). Of course The Lone Ranger himself was supposedly (very supposedly) modeled on Texas Ranger Captain John Hughes.

Hollywood wasn’t in the least interested in history, naturally, or the real Texas Rangers. All these movies showed us a bold band of men capturing crooks – often rustlers. In fact, as we know, the Rangers were founded as a paramilitary band of citizen soldiers to fight the Comanche and Kiowa, then as a border force fighting Mexicans. Later they would be used as strike-breakers against workers. Bringing in wanted outlaws was a small and rare part of their business. They did have some notable successes in that domain, capturing, for example, the outlaw Sam Bass and in particular, John Wesley Hardin. And there were highly competent, honest and decent Texas Rangers, notably the so-called ‘Four Great Captains’ (of which the prototype Lone Ranger Hughes was one). But the Rangers also had a less than enviable record as ruthless users of summary judgment, abusing the ley de fugas to shoot prisoners ‘trying to escape’, and as incompetent and/or corrupt officers. All of this is naturally air-brushed out in the Hollywood treatment.

Of all the screen Texas Rangers, I think the worst was the one portrayed in Paramount’s 1940 offering, Texas Rangers Ride Again. 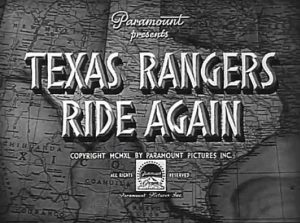 Shot in black & white by Archie Stout, it had its moments visually, and there are some nice shots here and there. The picture also has interest for Westernistas as being the debut of the great Robert Ryan – though he was ‘Eddie – Citizen in Car (uncredited)’ and you only get a glimpse (he has a caddish mustache). But in all honesty that’s where the interest dies.

It was directed, very badly, by James P Hogan, who did a lot of Bulldog Drummond pictures and from a Western point of view was a (very) assistant director on Union Pacific under Cecil B DeMille, helmed a few B-Westerns in the 1930s and reached Western heights when he directed the Randolph Scott oater The Texans in 1938. Much of Texas Rangers Ride Again is silly, and all is badly paced.

The picture was written by William R Lipman (only three Westerns) and Horace McCoy, who had a better record: he contributed to the screenplays of Western Union, Rage at Dawn and The Lusty Men, for example. You wouldn’t know it from the script of the 1940 picture, which is plodding, predictable and the comic relief falls flat.

The acting is also noticeably wooden. The movie starred Ellen Drew and John Howard. There is no electricity between them and they just stand, reciting their lines at each other. Howard had been Bulldog Drummond, so that’s probably why he got the part. He had small parts in four other Westerns, including a spaghetti, and is instantly forgettable. Top-billed Drew is probably best known for Christmas in July with Dick Powell but from a Western angle she did eleven and is perhaps most memorable for being the woman who married Glenn Ford but loved William Holden in The Man from Colorado and having Randolph Scott and John Russell vie for her affections in Man in the Saddle. She is visibly uncomfortable in Texas Rangers Ride Again. Maybe it was the bad writing and direction.

Further down the cast list Akim Tamiroff as the family retainer does a ‘comic’ Mexican piece of shtick that comes across nowadays as only just short of racist. Anthony Quinn, in only his third Western, is the Mexican-Indian half-breed (and thus obviously bad guy) Joe Yuma, who is the ranch foreman double-dealing and in cahoots with the rustlers. His part is laughably badly written and he must have squirmed at doing it. 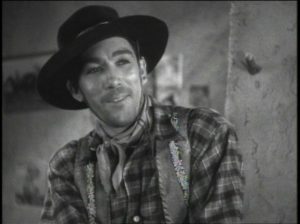 Broderick Crawford was also starting out in a genre he loved (but was unsuited to). He looks ridiculous in his range duds and is already delivering his lines (admittedly very corny lines) in that machine-gun fast Eastern gabble he used which was well suited to gangster noirs or police procedurals but not at all to the West. He plays the sidekick of the hero. It’s a ‘modern’ Western, with automobiles and horses, inhabiting that temporal twilight world that 1930s B-Westerns so often did (and in reality the picture is exactly that, a 30s B-Western) in which some characters wear modern dress and drive about in cars (the Rangers have 1939 Mercury sedans) while at the same time cowboys in 1870s garb ride the range with pistols on their hips, and no one seems to notice it’s odd.

There’s a bit of business with a hidden radio that could have come directly from a juvenile 30s serial.

There’s the supposedly amusing wooing by elderly Ranger Caldwalder (Charley Grapewin) of the equally elderly grande dame of the ranch Cecilia Dangerfield (May Robson), and he finally wins her hand when he gets up the gumption to order her about. Actually, there’s far too much attempt at comic relief throughout. The New York Times said, “The legend of the Rangers is as fabulous as the land they patrol, but you’d never guess it from the business which transpires in this latest horse opera, wherein everything is reduced to the elemental cops and robbers, boy-meets-girl formula.” The review added, “There also are some very tedious doings before the Rangers get to the bottom of the cattle rustling racket.”