Ryan on the small screen

That fine actor Robert Ryan appeared in 18 feature Westerns, between 1940 and 1971, and we’ll soon be looking at his career in the genre, a Ryanography as it were. But he also did some TV work: four episodes of Zane Grey Theatre, two of Frontier Justice and, what we’ll discuss today, two of Wagon Train. 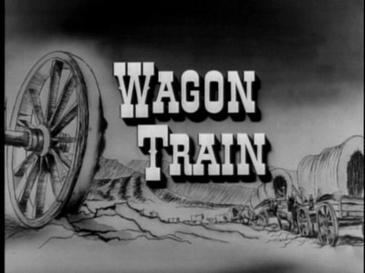 Both were under the post-Ward Bond John McIntire leadership, though the first was one of those episodes when Chris Gale was absent somewhere and so he didn’t appear, Terry Wilson being in charge.

The first was in 1962, Season 6 Episode 10, The John Bernard Story, and Ryan played the titular Bernard, a Catholic priest. 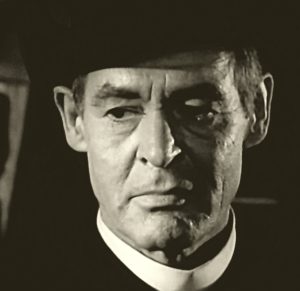 I find it interesting how a guest star can completely dominate a show like this. Especially without McIntire, there was no one on the set who could hold a candle to Ryan. All the other actors seem pale by comparison.

The story is one of racial (in)tolerance as some Indians, who have a sick young man (Perry Lopez) and seek help for him the tough way: they kidnap an elderly lady on the wagon train (Doris Kemper) and say they will return her unharmed when their man has been seen by a white doctor and cured. A party on the train, led by the odious Ben Gill (Ben Osmond) will have none of it, especially when they find out what ails the boy. They are all for leaving the old lady, expelling the Indian and pushing on. Bill Hawks, of course, is more compassionate, and the ‘do the right thing’ party is urged on by the noble priest, Fr Bernard. So a doctor is sent for from the nearby town.

This doctor (Herbert Lytton) turns out to be as prejudiced as Gill. He diagnoses leprosy. This shocks the priest, who has examined the youth and drunk from the same canteen. Is he infected?

But Fr Bernard has a past. He recounts how he committed a shameful act of cowardice back in the war. Now he is determined to atone for that by aiding the sick man and recovering the old lady.

So it’s quite a dramatic episode, all in all. It all comes right (ish) in the end, of course. Gill’s nephew is Beau Bridges (in only his second ever Western appearance), an orphan, and he is a decent sort. Finally he rebels against his cruel and authoritarian uncle.

A good episode, with Ryan towering.

Two years later, in S8 E1, Ryan was back, in The Bob Stuart Story. I actually prefer this one, partly because McIntire was back (I’ve always been a fan) but partly also because Ryan plays a more Ryanish role. He is ‘Shotgun Bob’, a former lawman, just married (to Vera Miles) who had, when in office, a short way with the bad guys: a shotgun blast in the back. And guess who was one of the victims of such attentions, back in the day? Why the wagon train scout Cooper Smith, of course (Robert Fuller, of course). This Bob Stuart is now to join the train with his new wife (they are going off to start a sheep farm, Western code for not being 100% good guy) and it’s Coop’s job to look after them. Yet he loathes Stuart with all his being.

Furthermore, two of Coop’s former compadres (William Smith and Andrew Prine) who are very clearly a bad lot, want to join the train, and Coop gets them a job by vouching for them to Chris. They too hate Stuart, and unlike Cooper have no compunctions about going for him.

Naturally Mrs Stuart urges non-violence, in a High Noony/Shaney kind of way, as Western wives were wont to do, but equally naturally a man’s gotta do what a man’s gotta do, and we sense a showdown looming. 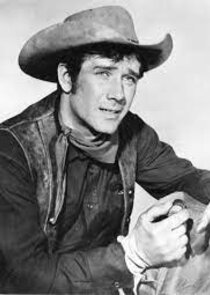 Smith’s character has with him a brother (Tommy Sands) who was hit brutally about the head by Stuart with the famed shotgun and is now mute and mentally challenged. He helps Charlie (Frank McGrath) with the dishes and Charlie is really kind to him. But finally, the boy will take up a rifle… 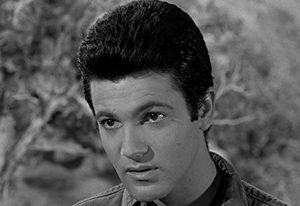 So another tense episode. Ryan was truly excellent as they hard-as-nails Stuart. He was ready to do whatever it took back in the day and he’s just as ready now.

Both are available on YouTube and worth a look.