In Only the Valiant, also known by its working title Fort Invincible, Gregory Peck plays Captain Richard Lance, Dick to his (precious few) friends, a by-the-book West Pointer who licks bad soldiers into shape out West. For Peck, this role came between being Horatio Hornblower for Raoul Walsh at Warners and King David for Henry King at Fox. Only the Valiant definitely wasn’t in that league. On one level it was just a rather static black & white oater shot cheaply on a studio set with a supporting cast verging on the mediocre. In fact Peck considered it the low point of his career. 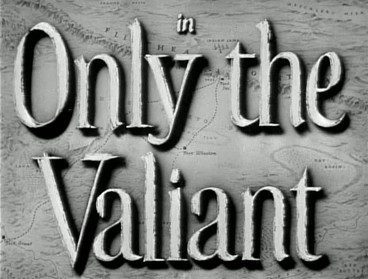 That was maybe a bit harsh. The picture isn’t that bad, and the budget was $1.49m, not chicken feed. It was directed by Gordon Douglas, who himself admitted that he took whatever job was going, to put food on the family table, and the resulting films weren’t all great. But he was capable of good pictures: in our genre he made The Nevadan, Fort Dobbs and The Fiend Who Walked the West, for example, all excellent Westerns. But he churned out bread-and-butter stuff too. Actually, this film arrived in the theaters only a week after his previous picture, The Great Missouri Raid (another so-so Western, for Paramount, about Frank and Jesse James). It is true that Peck had recently made some superb black & white Westerns, such as Yellow Sky with William A Wellman and The Gunfighter with Henry King, both at Fox, and Only the Valiant wasn’t a patch on those.

On the other hand, there’s a noir vibe to Only the Valiant, and there’s a good attempt at building tension (at times it’s almost a whodunit). Furthermore, a really good actor – and Peck was that – could ‘lift’ a mediocre picture, and that’s what he did here. 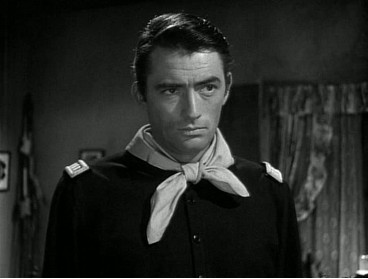 The producer was William Cagney, Jimmy’s brother. That may have been part of the problem: he only made two Westerns and the other was the distinctly stodgy Bugles in the Afternoon, a sadly plodding version of a great Western novel. 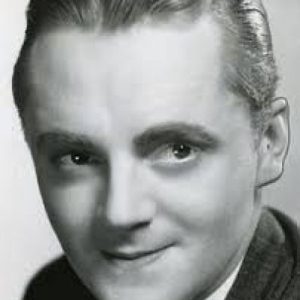 The Los Angeles Examiner reported that the Cagneys were going to reunite for this film the entire cast of their picture Time of Your Life, which included William Bendix, Wayne Morris, Broderick Crawford and Jeanne Cagney, but that never happened.

One reader of this blog, Stereosteve, suggested that maybe Cagney made Only the Valiant for Fox but that later it was sold to Warners. Steve says, “I noticed that the credits of this film used the then-standard corporate 20th Century-Fox type font; I wonder if Fox, to whom Peck was under contract at the time, didn’t make it, then consider the finished product beneath them and sell it to Warner’s, whose standard product it was more in league with.”

It’s a story of US soldiers vs. Apaches in New Mexico. The few location shots there are were photographed, by Lionel Lindon, near Gallup. Lindon was not one of the greats of Western cinematography. Probably A Man Alone was his best. But he didn’t have much to work with here because most of the action, and a lot is inaction, takes place at the fort of the title, one of those Hollywood wooden forts and clearly a studio set. It’s dark and claustrophobic.

Of course cavalry Westerns were all the rage at the time, most notably made by John Ford. Douglas started filming Only the Valiant in July 1950, exactly the same time as Ford was shooting Rio Grande in Utah, though of course the pictures are not comparable in quality.

Lance does remind one a little of Henry Fonda’s Colonel Thursday in Fort Apache. He’s as rigid as Thursday. But he’s more competent. Peck is the equal of Fonda in this part (and that’s saying a lot). 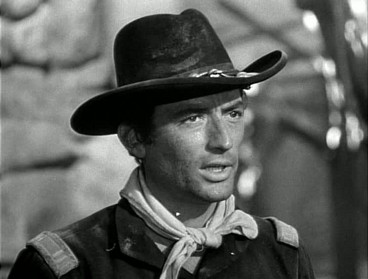 There’s a Dirty Dozen aspect as Lance, knowing his effort is doomed, recruits the dregs of the army to accompany him on what he thinks will be a suicide mission. At one point he tells his men why he ‘volunteered’ them: he lists their faults in a devastating way – cowardice, drunkenness, desertion and so on. He took them, he says, because they were the troops that could best be spared and who would be least missed if they were killed. Nothing like encouraging your men.

The troopers include Ward Bond, who does his stereotype Fordian drunken Irish corporal act and hams it up for all he was worth (which was quite a lot). Every so often he produces a malign, snide glance that shows real menace. But most of the time he sings drinking songs in a brogue. He probably wished he was up in Utah with his pals. 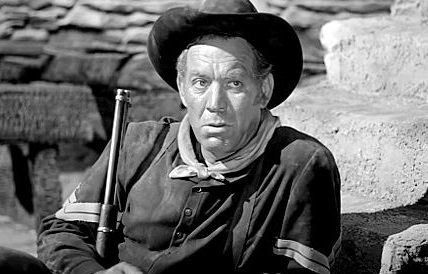 Jeff Corey is about the best as the tough old Army scout, Joe Harmony. 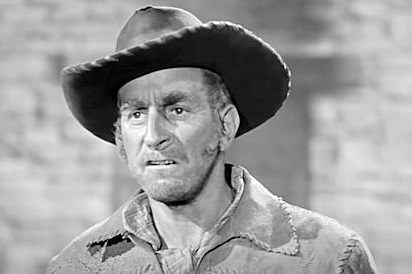 Lon Chaney is a curious Trooper Kebussyan in a big black beard, whom they call A-rab and who refers to Peck as “effendi”. You can see him building up for self-sacrifice a mile off. 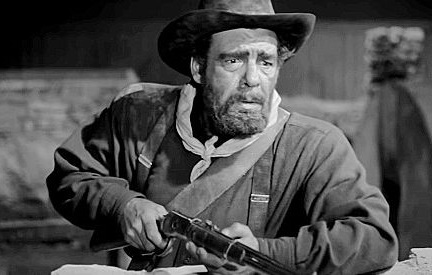 Neville Brand is enjoyable as an odious and bullying Sergeant Murdock. 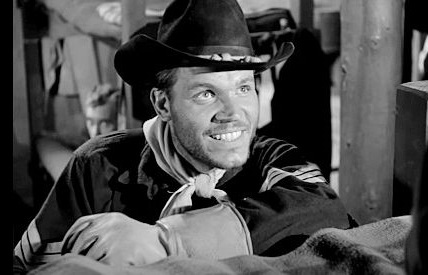 We also get Gig Young as Peck’s rival in love, Steve Brodie and John Doucette. 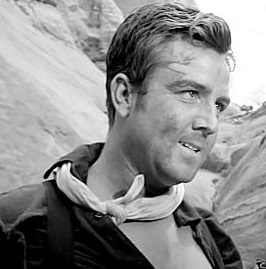 Habitual ‘Indian’ Michael Ansara is quite imposing as Apache chief Tucsos and there is an improbable 1:1 duel at the end in which he cashes in his Apache chips. OK, so I’ve spoiled it for you but I haven’t really: you knew that. 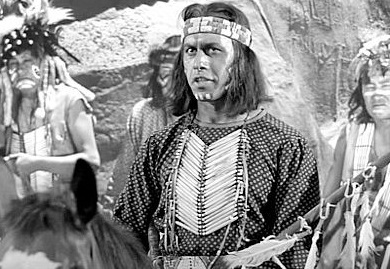 There has to be a woman, naturally. Barbara Payton (with whom Peck is said to have had an affair on the set) as Cathy jumps to an enormous conclusion and assumes Peck guilty of a base act, spurning him. Like all good Western heroes, Peck does not lower himself to self-justification. If she wants to think that, let her. Of course, later she realizes she was wrong and wants him back. I would have told her where to get off but Peck ends up in her arms with Bond drunkenly serenading them both. It won’t last. In fact the happy ending rings false. 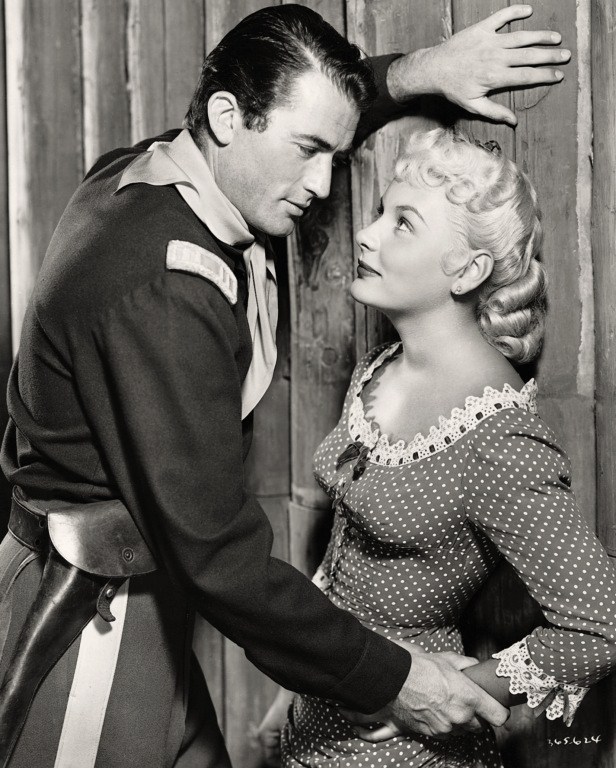 Variety said, “In this cavalry yarn unfolding in the wild Apache country of the old west, great pains have been exerted to provide interesting characters.” I’m not sure about that. The screenplay was written by Edmund H North (Colorado Territory) and Harry Brown (The Fiend Who Walked the West), based on the 1943 novel by Charles Marquis Warren. I haven’t read the Warren book but the script of the movie is occasionally plodding, at least in the second half.

There’s an action climax involving a Gatling gun (Gatlings were never in fact used in the Indian wars) which is quite well staged. The Apaches bite the dust in droves. We have kinda seen it before.

According to Warner Bros accounts, the film earned $1.79m domestically and $1.63m foreign, so that wasn’t bad.

Critically, it wasn’t such a great hit. The New York Times said, “Thanks to Gregory Peck’s physical authority and his ability as an actor to imbue a synthetic character with a degree of conviction that would be lost to a lesser performer, the spectator is not, at least, overwhelmed by the banality of the plot.” The reviewer added, “This does much to cushion the absurd impression of soldiering that is created by the actions of Ward Bond, Lon Chaney, Neville Brand and Steve Brodie in particular. But don’t blame the actors; they just read dialogue and, presumably, conduct themselves according to the wishes of the scenarists.”

The picture has been pretty well forgotten since. It isn’t even included in The Encyclopedia of Westerns, for example.

Only the Valiant isn’t bad. It isn’t terribly good either, and it’s certainly not in the top league of Gregory Peck Westerns, Gordon Douglas Westerns or cavalry Westerns in general. But it has its qualities and would repay at least one watch. 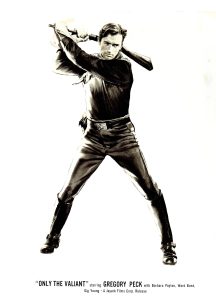