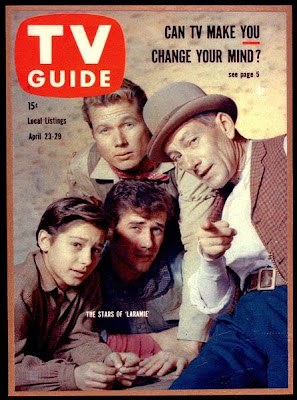 I feel we need an earnest discussion of the merits of NBC’s late 50s/early 60s TV series, Laramie. The world needs another discussion of 50s/60s Western TV shows.

Your blogger Jeff was a mere stripling when the series was first aired. To be brutally blunt, though he was an ardent fan of all TV Westerns (and as you know, there were many) he didn’t enthuse that much over Laramie. It was too talky. They talked too much. And while I might have appreciated it now, at that time, callow youth that I was, I did not care one bit for the part in every episode (in the first season anyway; luckily, his contract was not renewed) when Hoagy Carmichael sat on the corral fence and sang another damned song.

Talk about slowing down the action.

You will remember the story: when their father is brutally slain, the Sherman brothers, Slim (John Smith, real name Robert Van Orden, died in 1995 of cirrhosis of the liver) and younger brother Andy (Robert Crawford Jr, born 1944, brother of The Rifleman‘s son Johnny Crawford), are left to run the ranch. One day a drifter arrives, Jess Harper (Robert Fuller, real name Buddy Lee, born in NY, 1933, later to star in Wagon Train) and he becomes a sort of honorary brother. They make the ranch a stagecoach station. 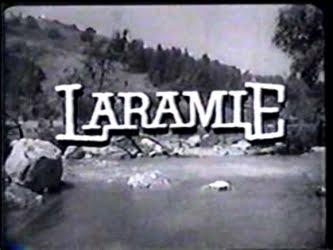 Various adventures, more or less plausible, ensued. The show ran for four seasons, first in black & white, then color (tho’ Jeff only ever saw it in b&w as we didn’t have a color TV then) from 1959 to 1963 when it was finally axed for low ratings.Every episode began with the lyrical (hem hem) Laramie theme by Cyril J. Mockridge, deathless lyrics by Bill Olafson:
.
.
Stranger ride carefully
Stay ‘way from your gun.
There’s danger in Laramie
For men on the run.
Your gray eyes shift warily,
There’s no room here for you.
Just stay wise, this is Laramie
Keep traveling on through.
Faster guns than yours have made the foolish play
The next time that you draw may be the last.
We’re a peaceful town; we aim to stay that way.

Well, in later series, people just kind of disappeared. Hoagy went off to St Louis to take Andy to boarding school. A sheriff and an orphan appeared (Stuart Randall and Mike Williams, respectively) and also a sensible housekeeper, Daisy (Spring Byington), to bring a feminine touch to an otherwise rather testosterone-ridden farm (and what’s wrong with that, I might ask).Slim and Jess remained, however, along with their mounts Alamo and Hoot. One’s sisters divided up tribally into Slim fans and Jess groupies. It did till Bonanza came along and they could really take sides. 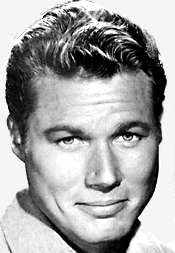 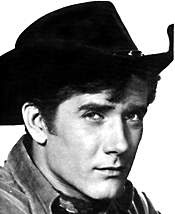 .
.
The German title of the series was Am Fuß der blauen Berge (At the Foot of the Blue Mountains). Thought you needed to know that.
.
.
All in all, though, it wasn’t a patch on Gunsmoke, Have Gun – Will Travel, Cheyenne or Tales of Wells Fargo. Still, it didn’t stop me following it. And I’d watch it again today, all 124 episodes, if it came on TV again in France, where I live. Pigs might fly. Maybe it’s all available on DVD.
. 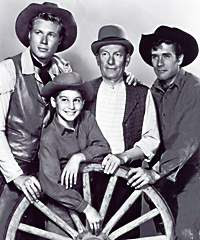